After visiting the Nith River bald eagles a few times and not seeing the eagles at all I must agree with locals who say the pair have moved on following last month’s severe storm.

This prompted me to turn my attention once more to the eagles that nest near Wilkes Dam in Brantford, Ontario. It’s on the Grand River and less than half an hour drive from my home.

Years ago I spent countless hours watching the eagles fishing here. Across the river from the nest there is a beautiful trail frequented by anglers, cyclists, people walking their dogs, folks simply exercising and eagle watchers and so these eagles are quite used to people.

Indeed, I remember about six years ago sitting on the riverbank about ten metres from a fisherman who was standing in the water. Suddenly, the eagle I had been watching for hours flew down between us, grabbed a fish in its talons and immediately returned to the nest with its catch.  The two of us looked at each other totally in awe of the experience.

In the past fortnight I have been there four times and gathered some ‘intel’ on the eagles’ preferred fishing spots. After finding both adults perched in a tree one afternoon I settled by the river and began waiting for some action.  Three hours later one of them suddenly flew down to the river’s edge and, mercilessly, stole a fish from a great blue heron. The heron flew to my side of the river and stared at the thief. Another case of what biologists call kleptoparasitism.

More recently,  I found both adults perched in a tree next to the river and so I prepared for another long wait.

The sun was directly in my face making photography more challenging. Since it was descending behind the trees I hoped the eagles would wait a bit longer before fishing. After about three hours the male took off and flew towards the nest which is up river from this site. The female, noticeably larger than the male, remained and I stayed put hoping I might see her hunt.

An hour later the male returned and flew circles above the river. It was obvious he had spotted a fish. 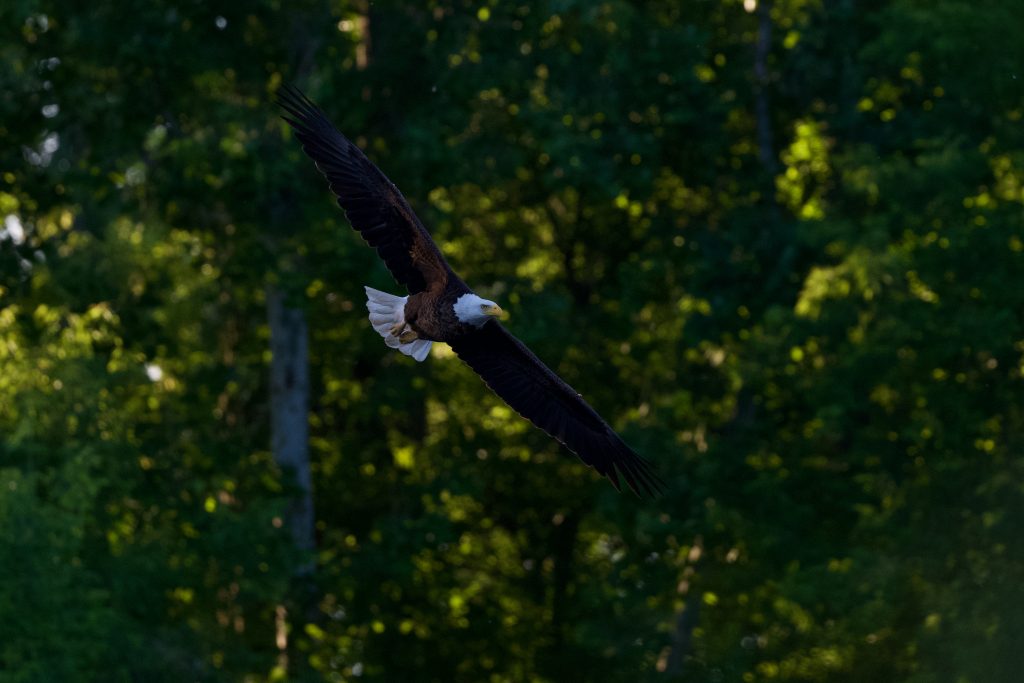 He missed on his first attack and gathered himself for another. 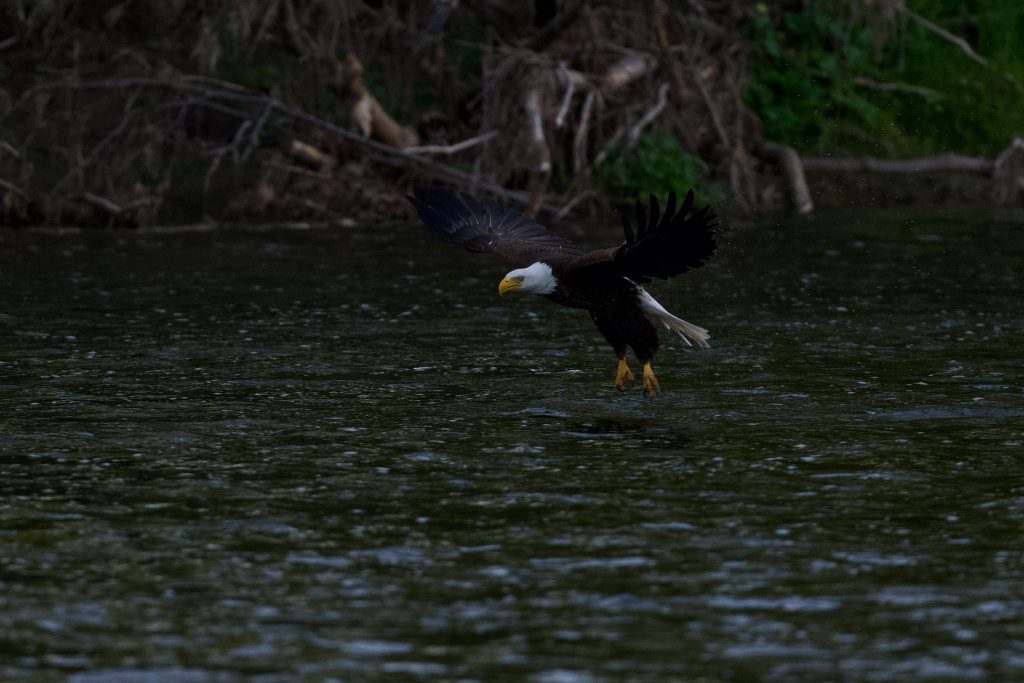 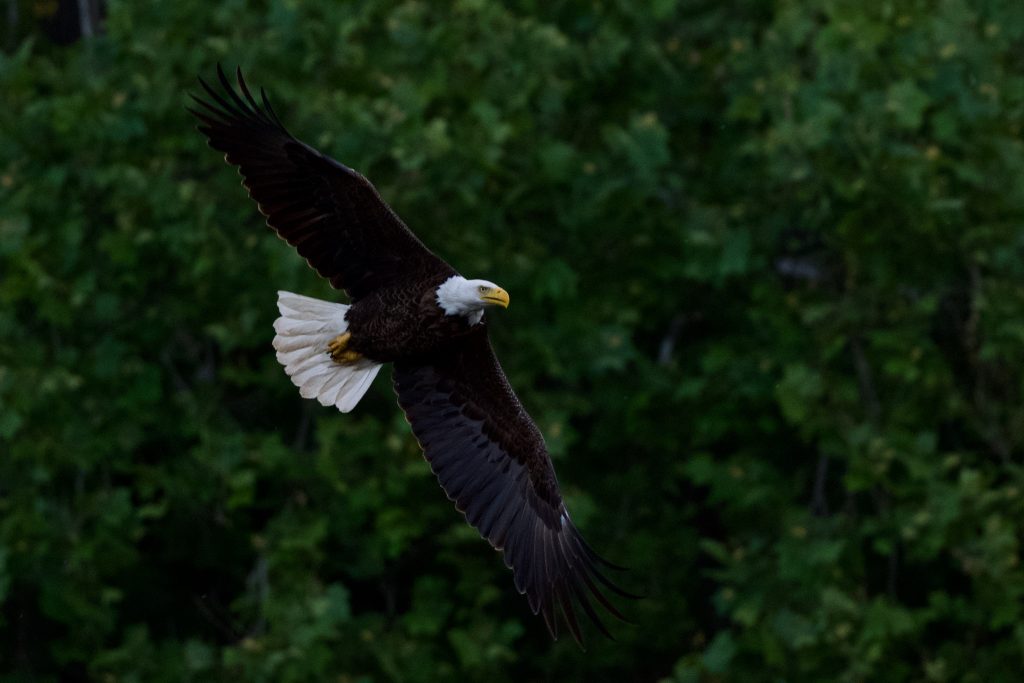 Then something quite remarkable happened. The eagle slowly descended and landed in the water. In the ten or so years I have observed bald eagles I have never seen this before.

Eagles will normally wait patiently for the right moment then attack with their talons outstretched. Sometimes they miss and are forced to make a second or even third pass.  This one floated in the water like a duck and the current carried him past me. I guessed he had caught a fish and was checking his grip. Once satisfied he emerged from the river, flew around the line of trees and vanished. 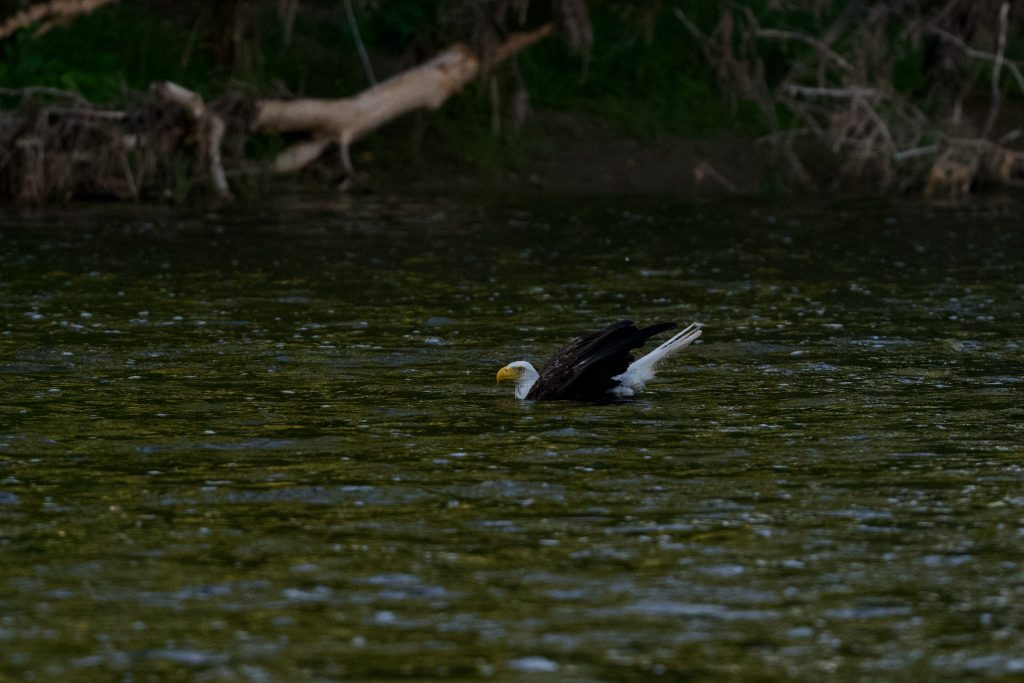 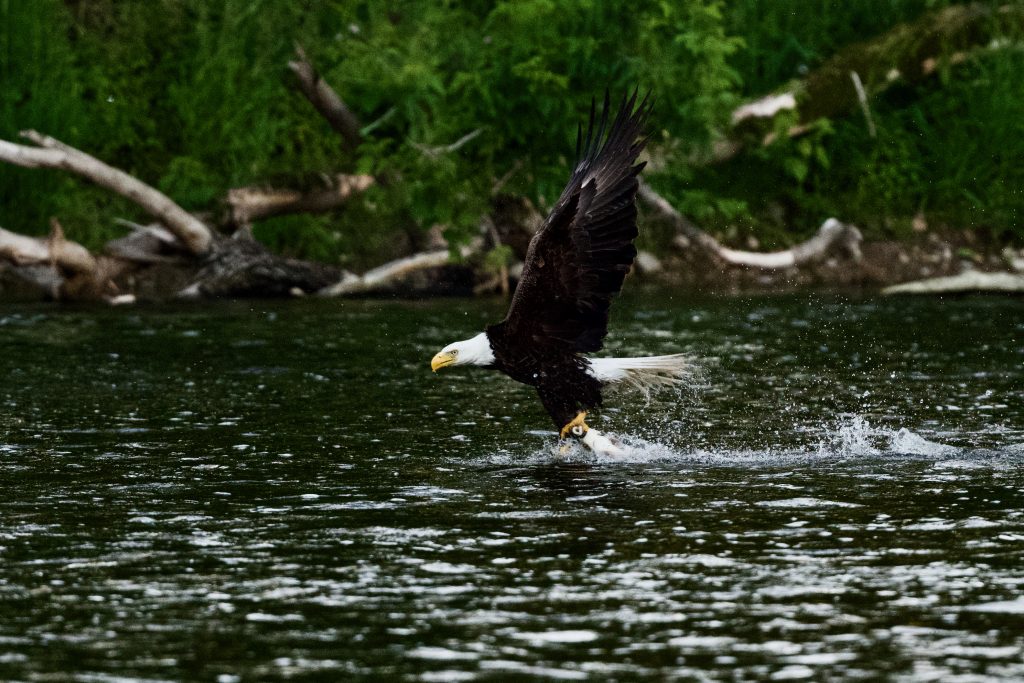 It was yet another unique experience with these magnificent raptors. Again, patience was essential.

I never fail to be amazed by what I observe in nature. And, although it is raptors and mammals that most interest me the entire ecosystem is fragile and must be protected.

If there is one thing I want to impart to readers it’s to enjoy the outdoors and make the time to observe our natural surroundings. By loving nature we can better understand how everything fits together.  That’s the first step to protecting it.