Over the weekend I made a couple of trips over to the Nith River bald eagles’ nest hoping to see the three eaglets flying low enough to capture some interesting images. Because of their relative aerial inexperience – they have only been out of the nest for about a month – two of the three spend most of their time in the tallest trees. The other seems far more adventurous.

Here is the adventurous eaglet making progress back towards the nest. Don’t be put off by her ‘glassy’ eye. One of her three eyelids blinked. 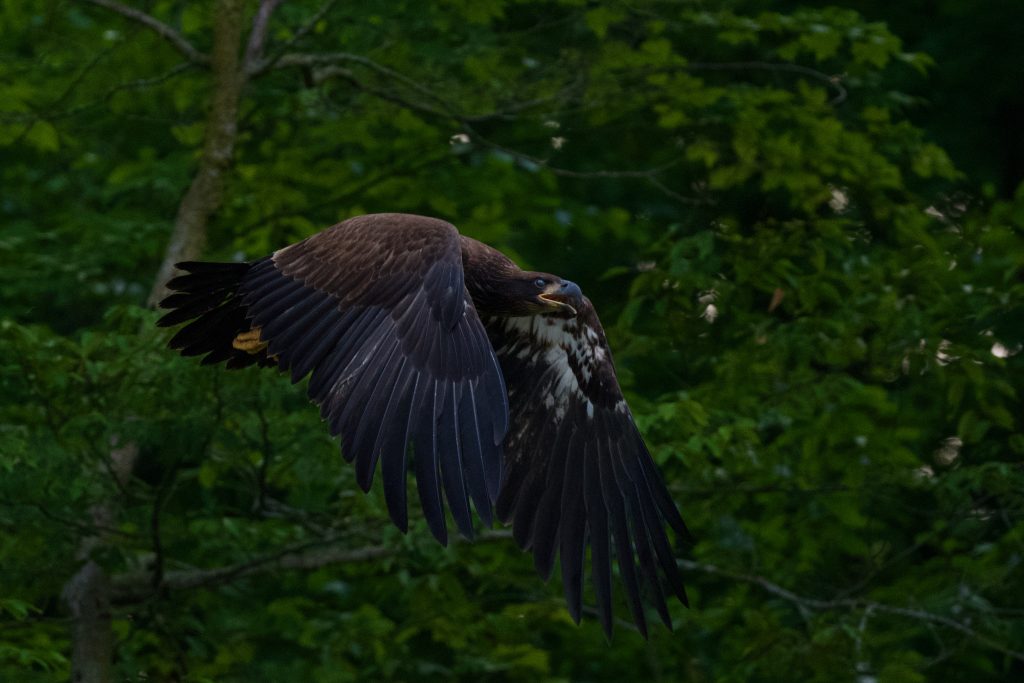 At this point I must admit that whenever I visit these amazing birds I am hoping to see this extraordinary one as she explores the river often kicking up a fuss when an adult delivers a fish to the nest while she is out and about. She is not yet strong enough to go from river level to the nest in one go. Instead, she must seek a higher tree, rest a bit, then go to an even higher one. Normally on the third time she will get high enough to enter the nest and join the other two.

Here she has joined her siblings in their wait for dinner. That’s her on the left. 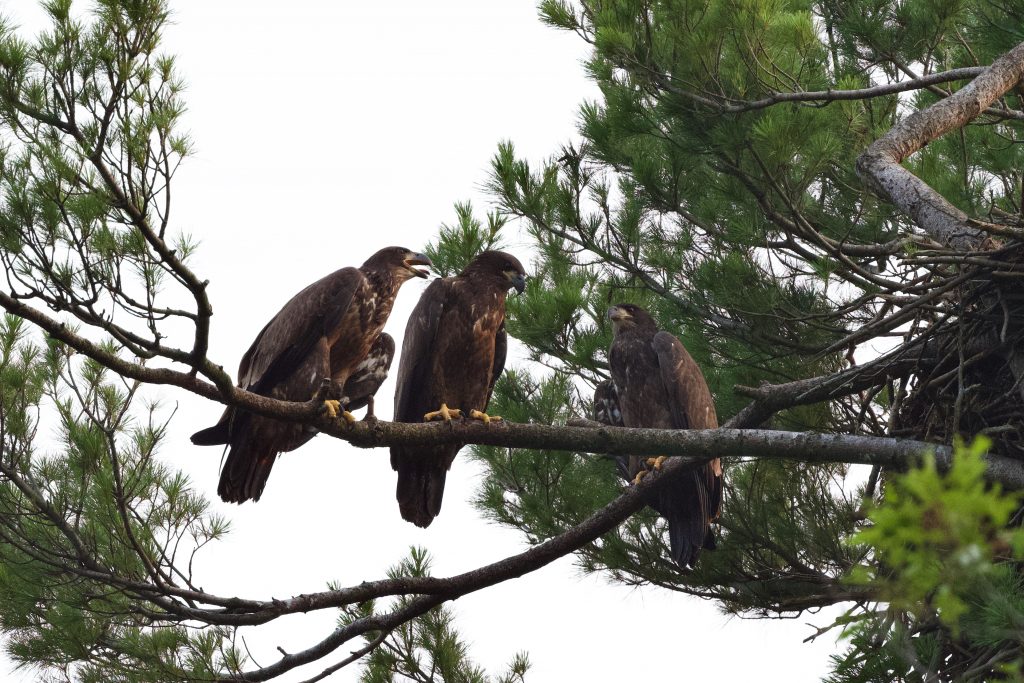 On the weekend, while the eaglets perched on a branch next to the nest calling out for food, I spotted a green heron fishing in the shallowest part of the river just around the bend. About the size of a large crow these birds stalk small fish using their long beaks to catch them. I have seen this one a couple of times previously. I found a spot at the river’s edge giving me a clear view but not so close that I might frighten it.

The green heron with a small fish. It would open its beak wide open and swallow the fish whole. 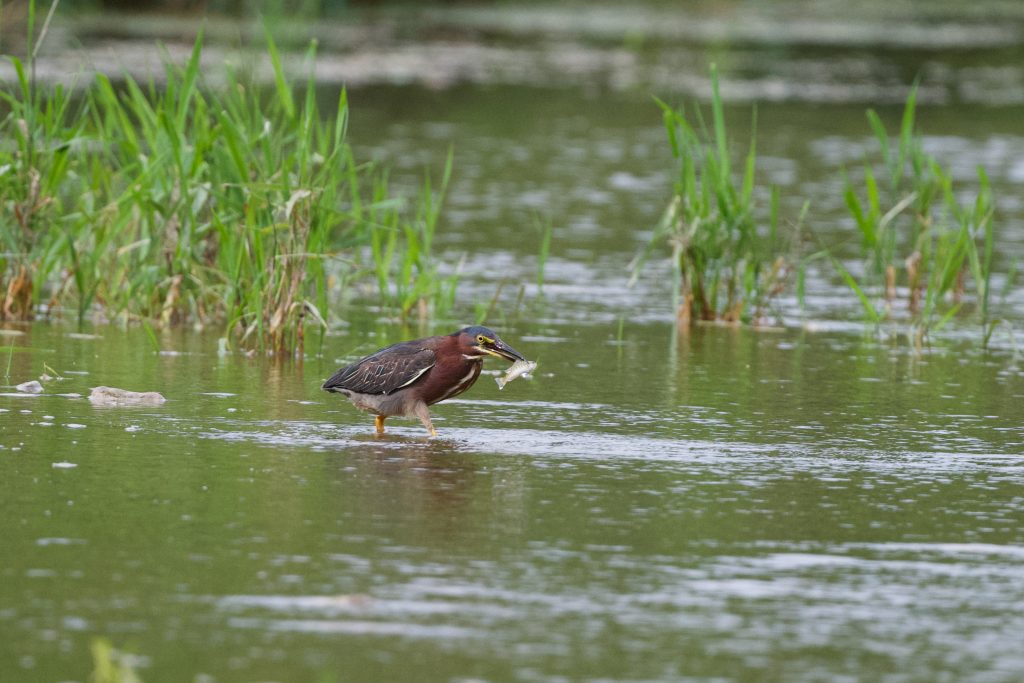 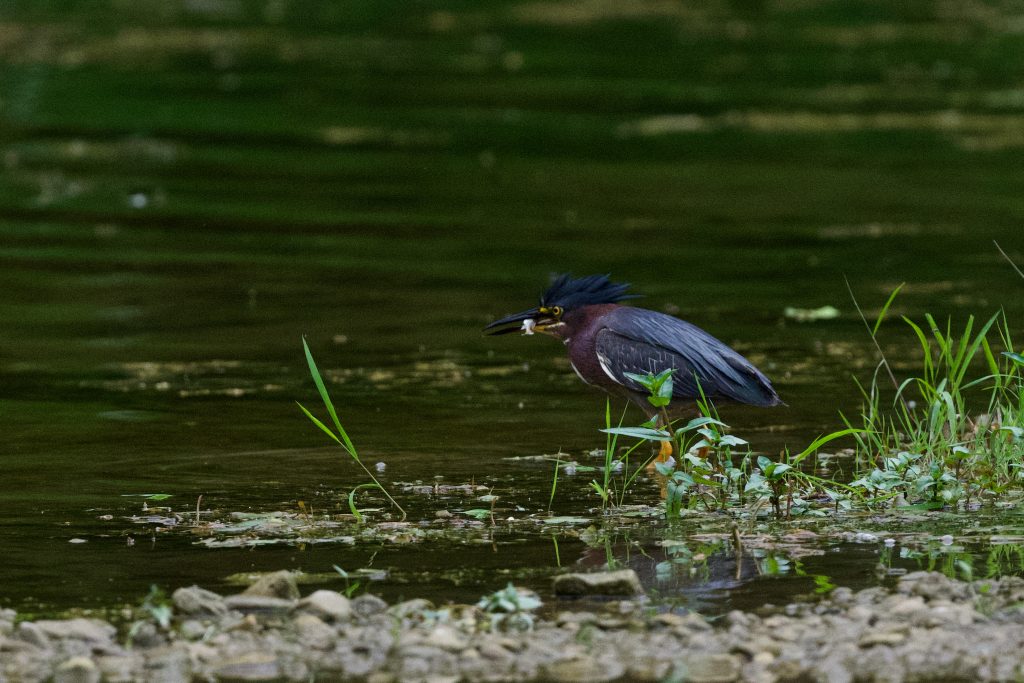 During the forty five minutes I observed the heron it consumed a heck of a lot of small fish. Eventually it flew away satiated no doubt. I missed the in flight shot. I am not experienced enough with this species to watch for any tell tale signs.

I wandered up river when the adult female bald eagle flew past lower than the tree height. I reasoned that she might go for a drink of water and a bath. Several times the past two years I have seen the adults in this location doing just that. Sticking to the trail which is now overgrown with weeds, I saw the eagle fly from the water’s edge to a nearby tree.

If I was lucky this eagle would fly past me en route to the nest. So I picked a vantage point about 70-80 metres away and waited.

It was another hot and steamy evening and I was feeling the effects. I always carry a Nalgene bottle filled with ice cold water for times like this and I took it out for a long drink.  My backpack also carries snack bars in case I get hungry. The last thing I want is to be distracted by my stomach when a choice image looms.

My hope was that this eagle would cruise around the bend in the river – which separated me from her – and then allow me a head-on shot with colourful foliage surrounding her. I could see her preening on the tree branch so I knew she could see me with her superior 20/5 vision. A few times I have been nearer but my presence then resulted in the adult eagle flying higher, thus offering nothing but sky as a background.  Or they would avoid me completely and go across the bend in the river.

Behind me I could hear the three eaglets calling out for food. A red tailed hawk circled the woods too. But I was determined to see if my experience with these eagles had taught me anything. So I waited for her to fly.

All of a sudden the eaglets calls became frantic with all three going mad. The adult male had delivered a fish to them. At times like this I have seen the adults drop the fish and then get the heck out of there as fast as possible leaving the eaglets to fight over the fish. Once the ‘extraordinary’ eaglet flew back to the nest, grabbed whatever food was there,  and flew away with it. Her siblings were understandably furious.

The female adult would know her mate had fed the young ones. Would she now make a move towards the nest? Another half hour passed and I was starting to think I might ‘settle’ for images of the green heron and the fledgling. The light changes a lot in the evening as the sun drops behind the trees and leaves most of the river in shade. So I kept adjusting my camera settings accordingly.

Then I looked up to see the eagle in the air. I could only make out the white head through the trees and couldn’t yet tell which direction she was flying. Finally, she rounded the bend and I snapped a couple of images of her head-on before she came past, following the river below her. My wait had been rewarded.

The adult female coming past me after a lengthy wait. I had picked the right spot to get the images I had envisioned. 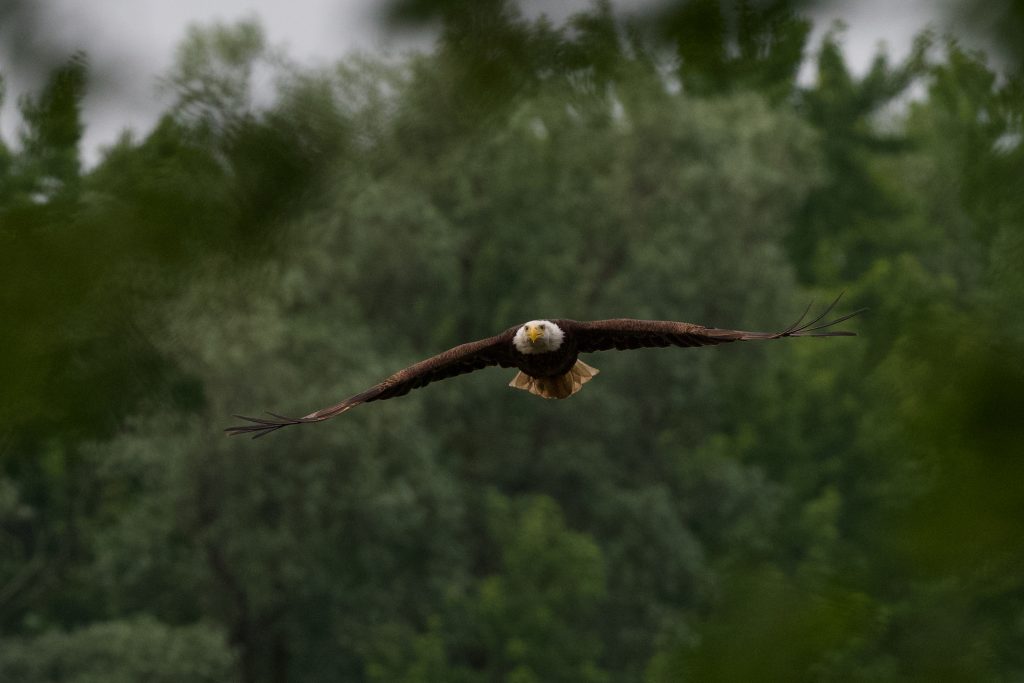 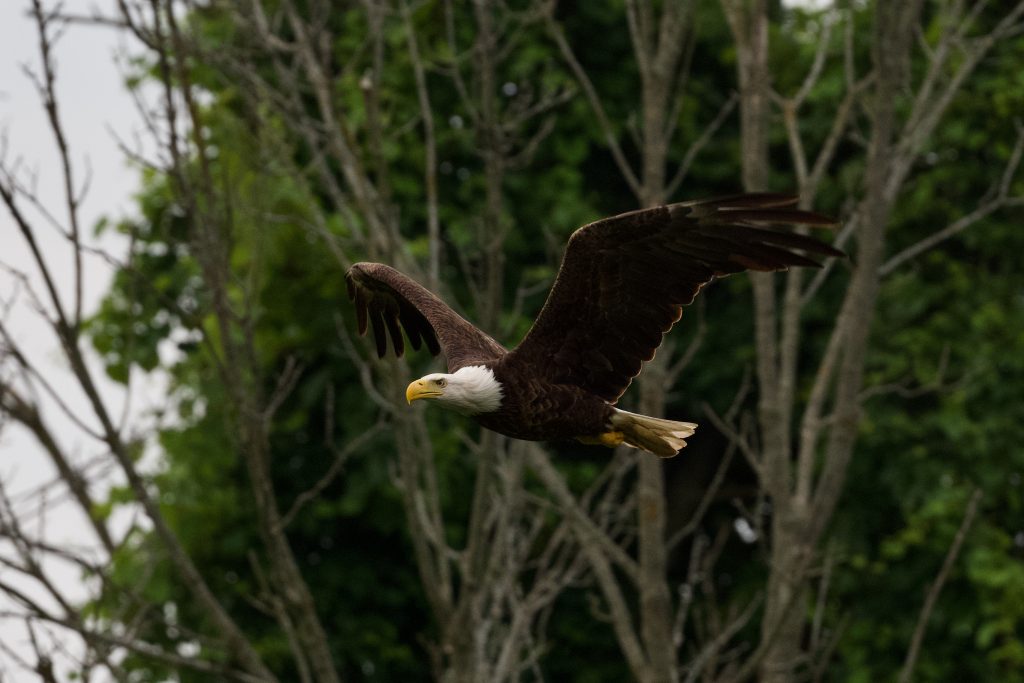