Cruising the country roads outside Paris, Ontario I have had some remarkable experiences with birds of prey.  There is a pair of Northern Harriers I see often and frequent readers will recall my encounter with a peregrine falcon not so long ago.

Most recently I have been seeing American Kestrels hunting in those same fields. Also known as ‘sparrow hawks’ they are the smallest of the Falcon family and are simply amazing to watch in action.

The males are colourful with blue, orange and brown markings while the females, slightly larger, are more brown with orange on their tail feathers.

After catching an insect she returns to a nearby utility pole. 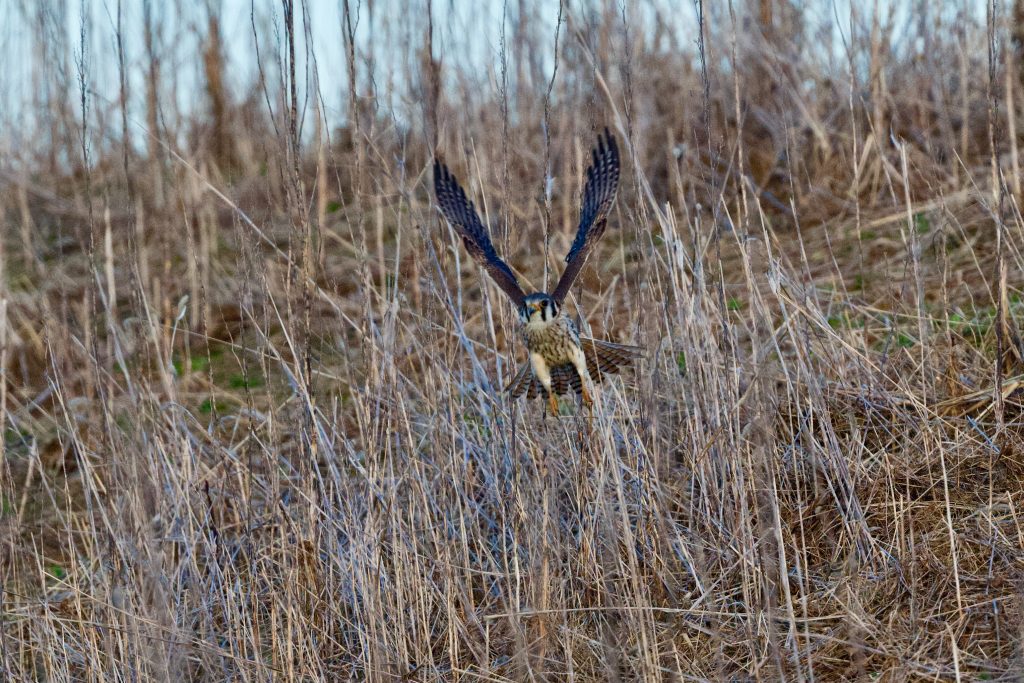 I have been watching this female hunting from the same utility poles for several weeks and have, until now, never been satisfied with my pictures.  So you can imagine my delight when she cooperated with me by hunting continuously on Thursday evening while I stood next to my car snapping away.

Kestrels spend as little time as possible on the ground 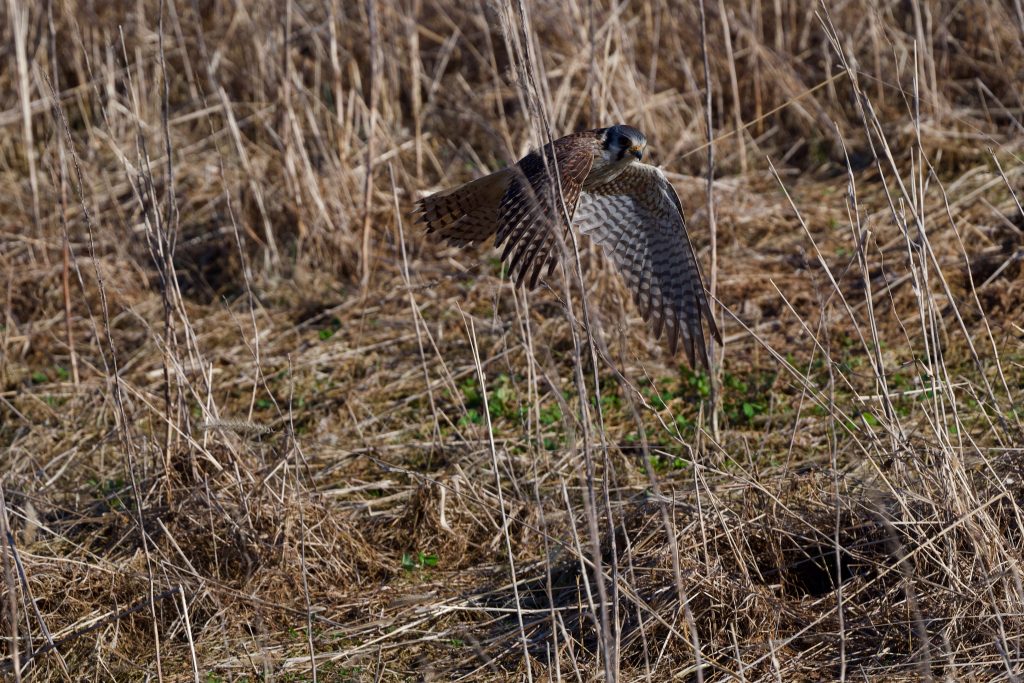 The female kestrel hovering above the grass. 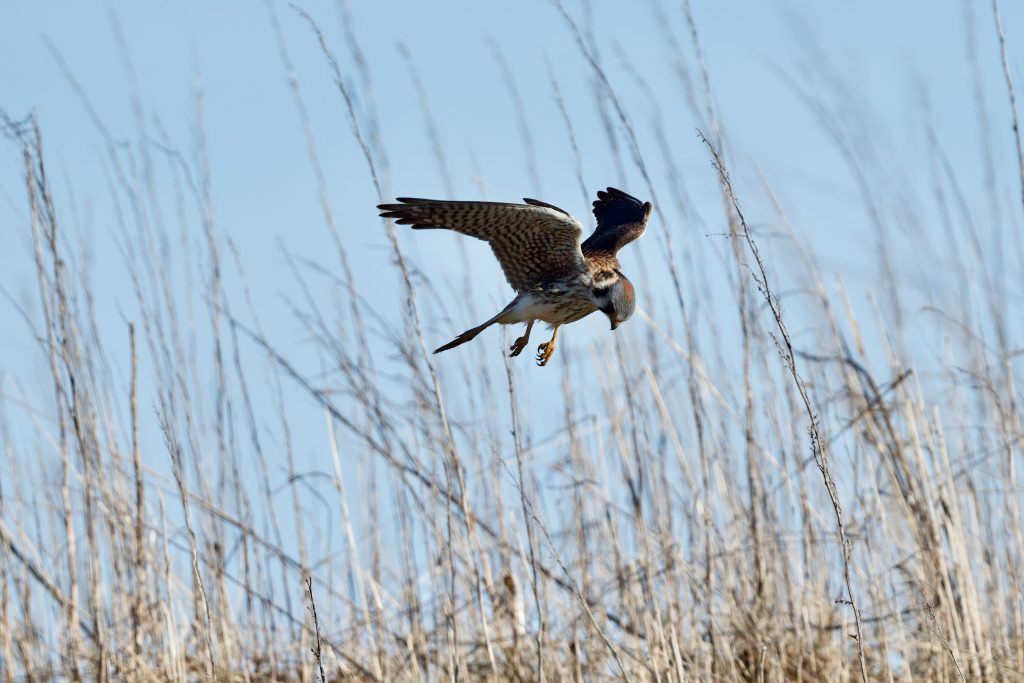 They are small, about the size of a mourning dove, so they fly very quickly and it is very dfficult to follow their flight path while focusing a camera.

This one kept hovering above a grassy hill, flapping its wings furiously in the heavy wind, before swooping down to catch insects. They will go after voles and mice also but this one seemed content with bugs and caterpillars.

The kestrel with prey after a successful swoop. 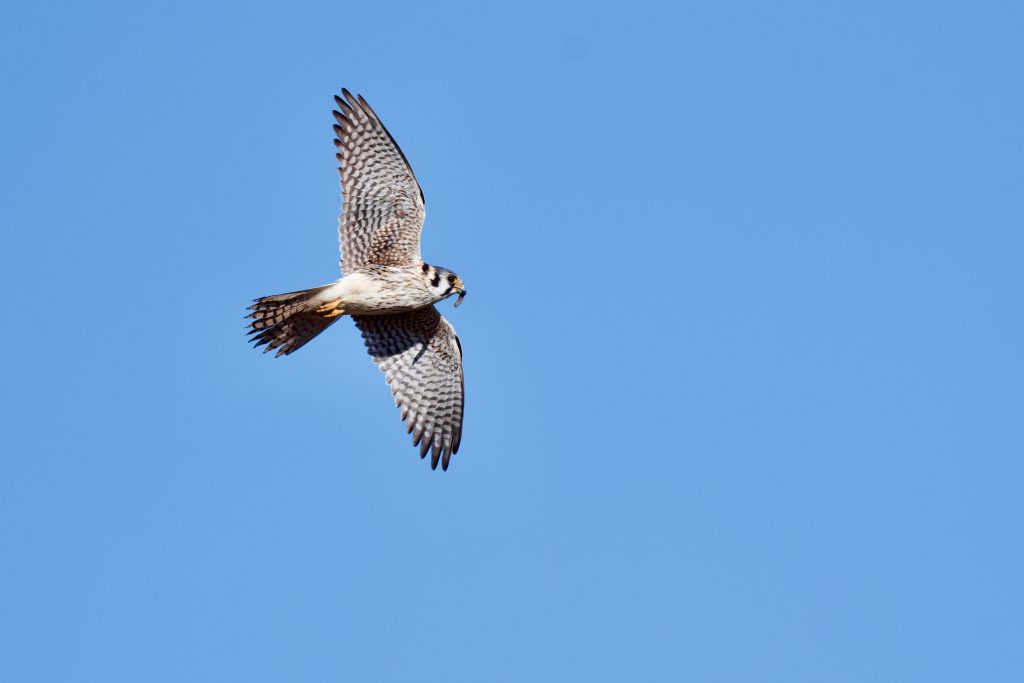 After a successful attack – always on the ground – she would fly off to a perch and eat her prey. Then  she would survey the same area ready to attack again. I saw her mate further along the road but as one National Geographic photographer once told me ‘when you find a jaguar you stick with that a jaguar’ meaning stay with the subject that is in front of you.

Her activity continued for more than an hour and each time I thought I would leave she returned to the air venturing nearer to me each time. How could I resist?

Eventually, as clouds covered the sun and I was nervously excited by what the images I saw on the back of my camera, I decided to head back to a sandhill crane nest I have been observing recently. I came across a bald eagle feeding on a dead raccoon and stopped to get some pictures.  But the kestrel was the star of the week!

A few places remain for my upcoming ‘Snowy Owls – Visitors From the Arctic’  Zoom presentation for the Woodstock Field Naturalists’ Club. It’s Monday May 2nd, 7:30 p.m. – 8:30 p.m. Eastern time. I will be sending the link to this zoom presentation in the coming days. If you would like to join us please send me an email today: pgains@golden.net