Writing projects have kept me occupied these past few weeks, not to mention looking after Chango, my eldest son’s dog. So my time with the snowy owls has been greatly reduced. Still, I have slipped out with my camera a few times with Chango for company.

On the weekend I drove to nearby Paris, Ontario to cruise the farm country looking for whatever wildlife might pop up. On days like these it is not unusual to spot a bald eagle travelling to or from the nearby Grand River or American kestrels hunting along some of the roadside ditches. One time I saw a herd of maybe thirty or more deer. During these excursions I look high and low, to trees, fenceposts and deep into fields in case I might see wildlife.

Imagine my surprise when I spotted a large bird tearing feathers off its prey not ten minutes into my journey. It was a peregrine falcon, a species I have never before photographed. Of course, I stopped the car, rolled down the window, and put on my hazard lights.

A peregrine falcon with its prey. 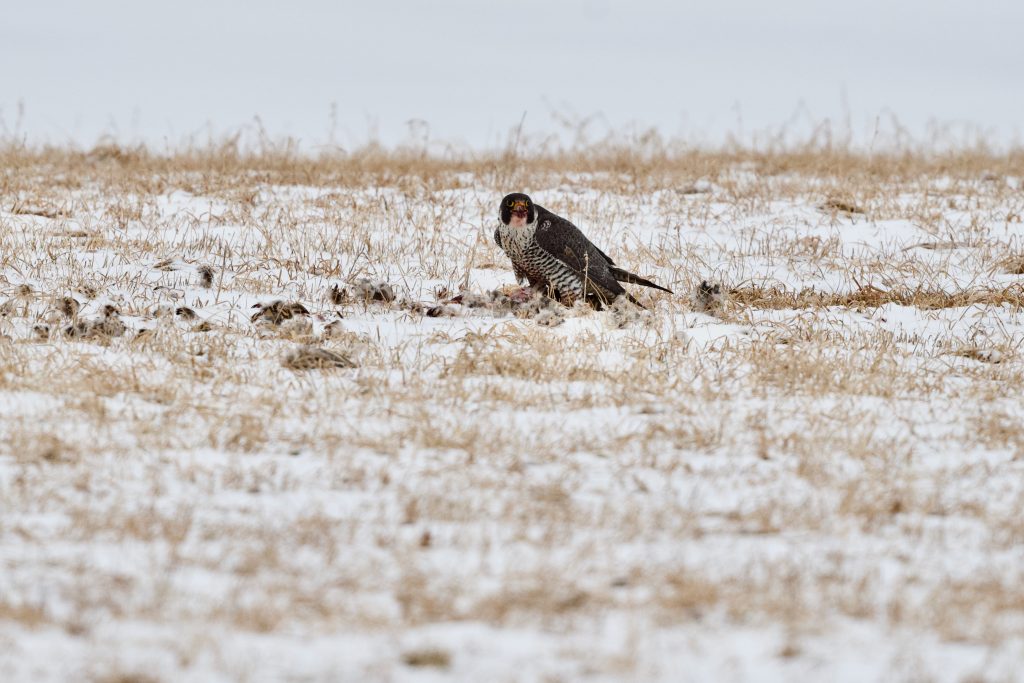 After snapping a few images I got out and walked across the road kneeling down with my camera in hand. I hadn’t expected this encounter and wasn’t wearing my waterproof trousers. My hiking pants and base layer were soon soaked through from the melting snow. The peregrine looked at me but continued plucking the feathers at a feverish pace. I couldn’t tell what this fierce raptor had caught but the wind was blowing feathers and fur all about the field.

I was 35 or 40 metres away and kept as still as possible. The peregrine soon ignored me and starting tearing flesh. It was happily making a meal of the prey when I heard the familiar sound of a nearby red tailed hawk. With this, the peregrine stopped eating and looked around. Suddenly it took off emitting a sound that reminded me of an ambulance siren as it chased the hawk. 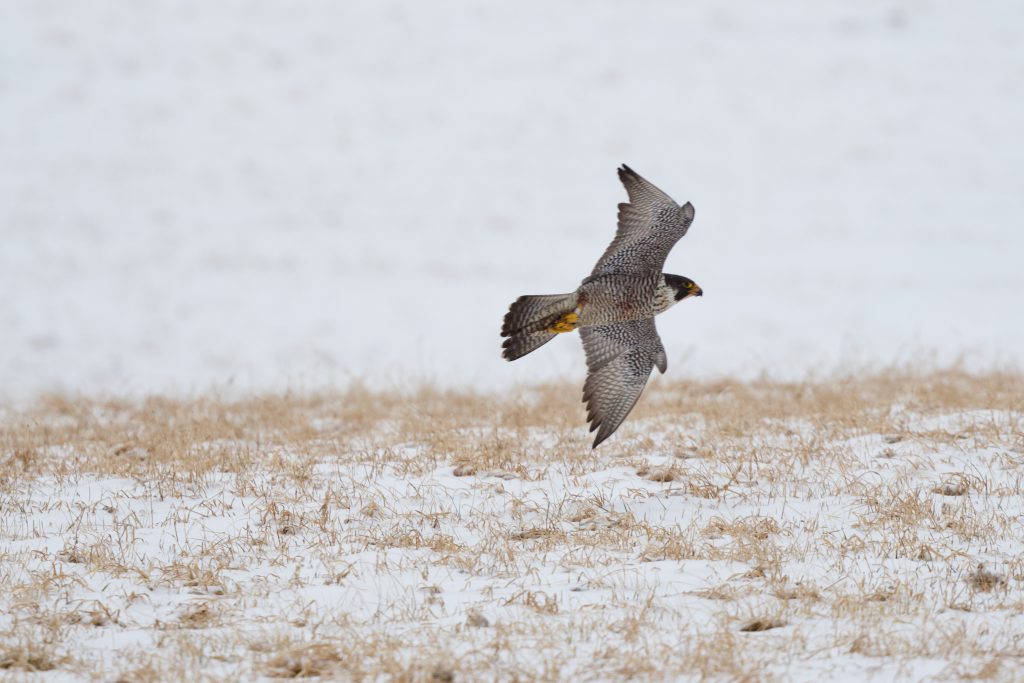 Peregrines are the fastest bird or animal on the planet, They can apparently reach speeds of more than 300 km/hr although they are more likely to be seen at a more conservative 110 km/hr when chasing prey. Watching these two raptors engaged in aerial combat was exciting to watch although most of the action was taking place too far away for decent images.

Finally, the hawk gave up and flew away, The peregrine returned to its meal still chirping away in a fit of excitement. 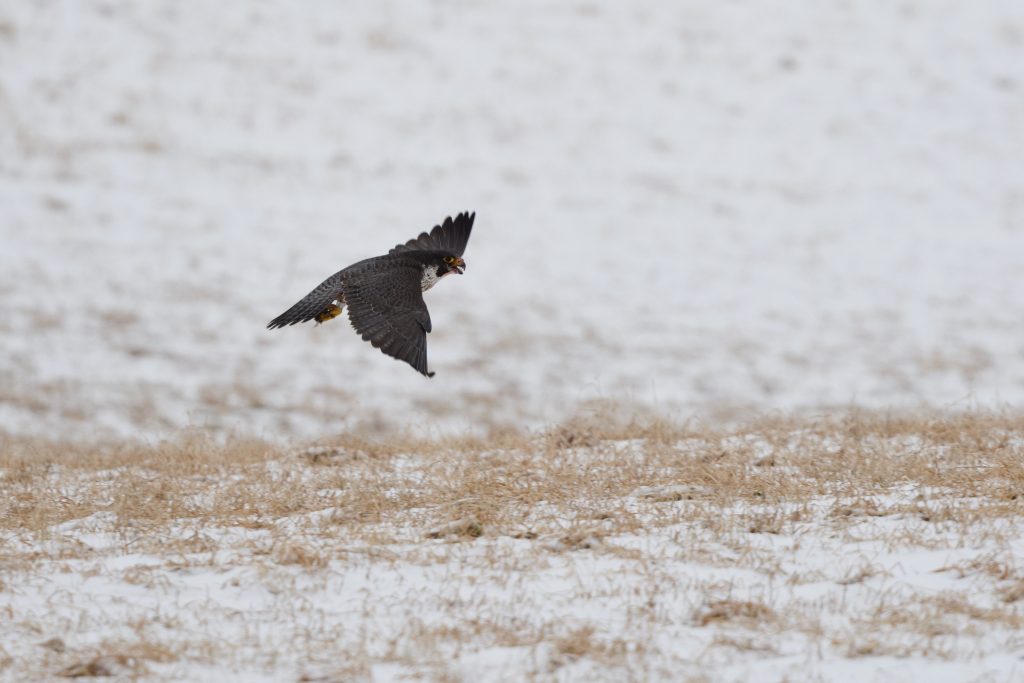 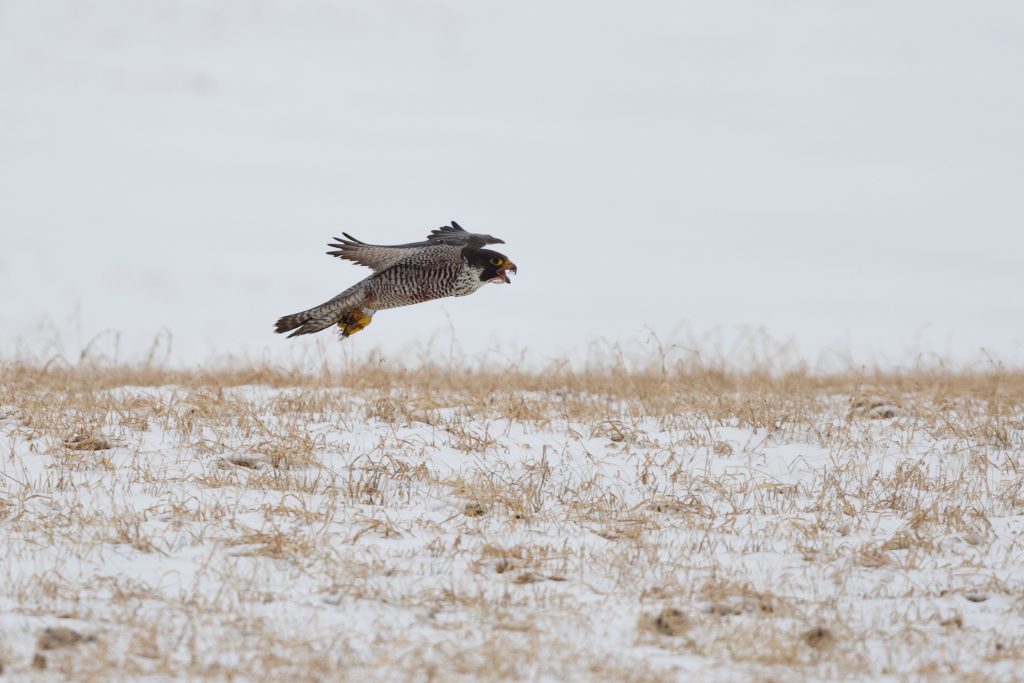 I went back to my car and reached for my fold-up fishing stool which is useful – and necessary to prevent a recurrence of the sciatica I had in the early months of the winter. I opened it up at the side of the road and sat down snapping away. The peregrine continued to tear flesh from the prey. 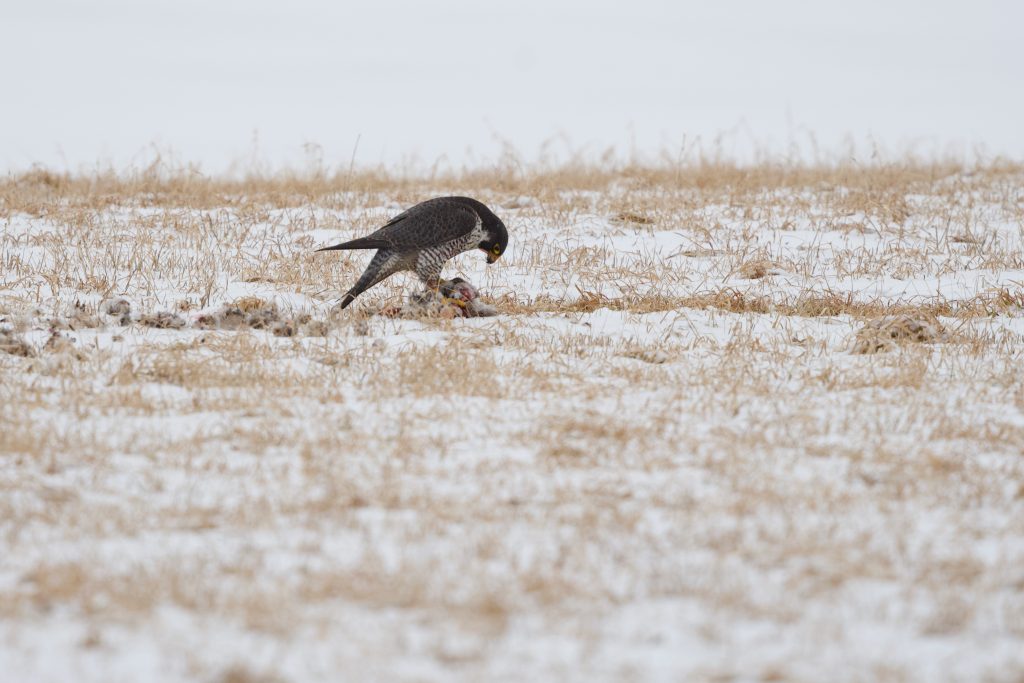 The wind was coming straight at me so I knew that when the falcon left the area it would probably fly away and I would see only its tail. If I circled around into the field I would have a more advantageous position. But I don’t know the farmer and didn’t want to trespass. After filling its belly the peregrine turned and stepped off the carcass. It flew away over the nearby trees.

Curious to know what the prey had been I drove to the farmhouse to speak with the farmer. He told me he had driven past me while I was taking pictures and had wondered what I was photographing. When I told him it was a peregrine falcon with its prey he was fascinated. He had also heard the commotion.

I asked if he minded me going into the field to see what it was that led to the battle. No problem, he said. Then he added, ‘one of our ducks went missing last night.’

I drove back to where I had been photographing the peregrine and stopped the car. As I walked towards the spot where it had been feeding I could see feathers, skin and down strewn about the place. And then I saw the remains of a duck. (warning: a graphic image of the duck is below!)

A couple of days ago while seated at my desk I watched a pileated woodpecker carving holes in a dead tree out back. A fox walked past one morning. And now the peregrine falcon just fifteen minutes away. There is so much to see and enjoy close to home – a welcome distraction from all the troubles in the world.

The aftermath of the peregrine’s activities. 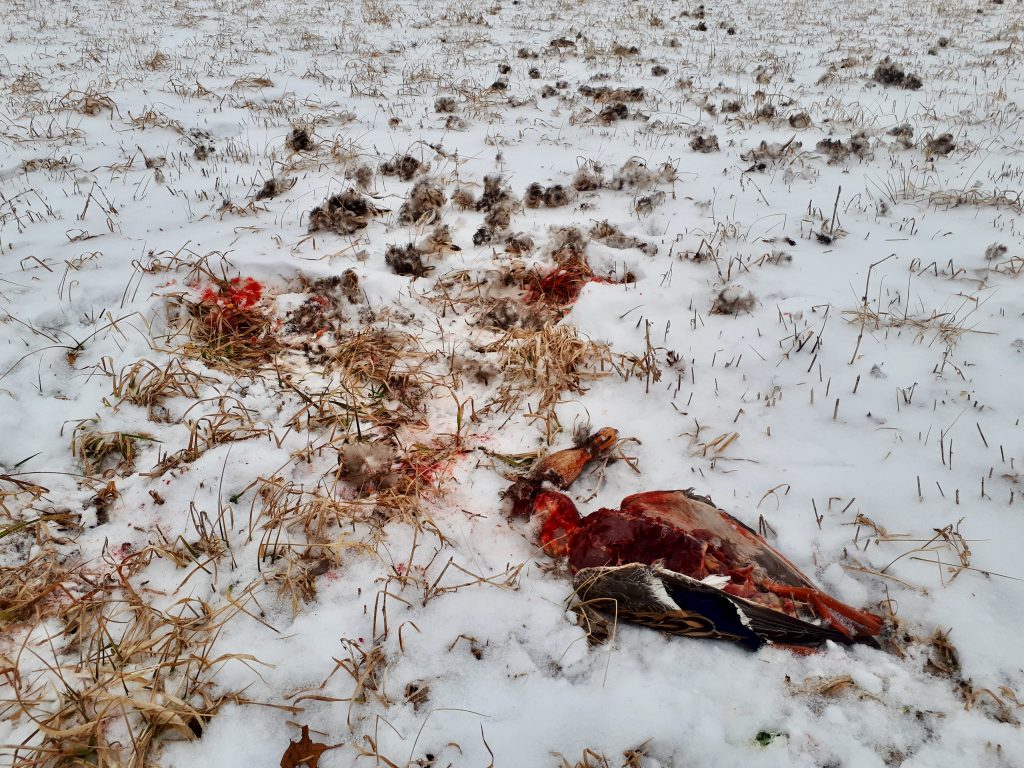