When bald eagles fledge (leave the nest) there can all sorts of drama as they learn how to fly and just as significantly, how and where to land. It’s not unusual to find eaglets crashing into trees or finding themselves on branches that cannot hold their weight.

The weeks of preparation during which they grow their flight feathers and practice flapping madly from the outside edge of the nest towards the inside is the best preparation they can have. But it’s another thing entirely to become dependent on those untested wings.

A year ago one fledgling I was observing spent seven days on a tree branch beneath the nest after she was unable to get enough height to return. It is also possible she had fallen. So it was with a great deal of concern that I drove over to Ron and Margaret’s place near the nest Saturday after receiving a call that they had a bald eagle fledgling on the ground behind their house.

The mortality rate amongst bald eagles fledglings is 50% in the first year. Was this eaglet injured? Did it lack the stamina to get back to the nest? Or was it simply sampling life on the ground for the first time?

When I arrived Ron took me to the back of their property and pointed into the woods where the eaglet had been perched on a tree stump. In the interim it had hopped further into the woods along the deer trail towards the nest. I spent thirty minutes looking around but couldn’t see this eaglet. I took that at as a good sign.

On Monday I visited the nest from my usual position where I often see photographers and local kids hanging out. For the past few weeks I was aware that three eaglets occupied the nest and I could see an eaglet flapping its wings like crazy on a tree branch that forms the foundation of the nest. Then I saw a second eaglet in the nest. I concluded that these two hadn’t yet fledged.

Nearby I spotted an adult in a tree. The adults can often be found close to the nest. Then an hour and a half later fortune shined. The third eaglet came flying up the river and then found its way onto a tree branch. 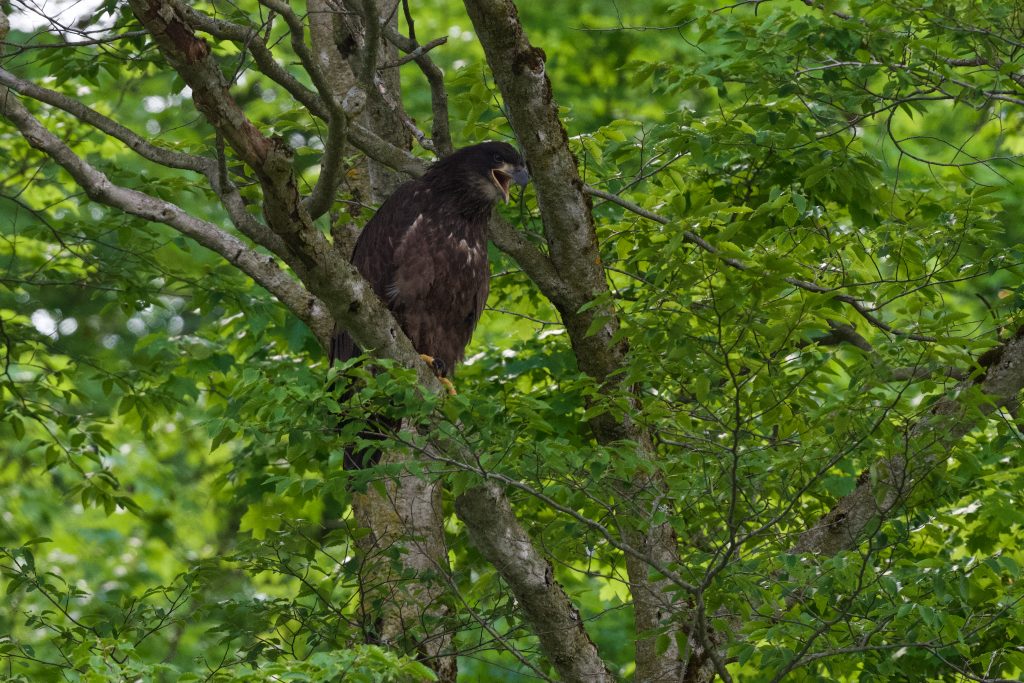 This had to be the same eaglet Ron had called me about. I was relieved and couldn’t wait to tell Ron and a fellow photographer who had emailed me that morning with her concerns for the eaglet on the ground. Word travels fast amongst photographers.

For the next few hours I watched this eaglet being harassed by a pair of Baltimore orioles that dive-bombed it. The confused eaglet called out as if to say ‘what do I do now?” 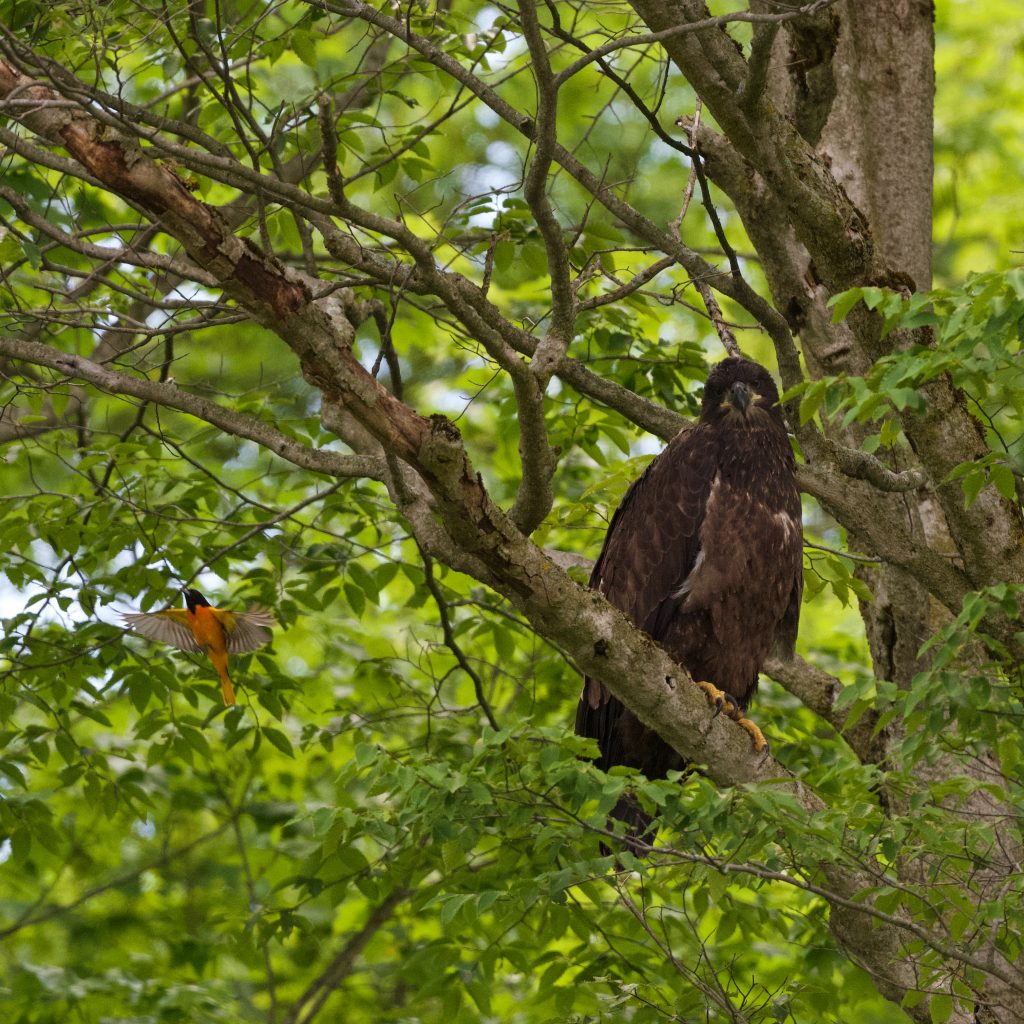 I kept my eye on the eaglets in the nest too. I could see one of them tearing at something – possibly stripping the meat off a squirrel, a duck or a chicken as I have seen them do. Fledglings must find their way back to the nest to get food.

An approaching thunderstorm darkened the skies which was perfect for me. Although I had to bump up the ISO on my camera I didn’t have to worry about the harsh midday sunlight that can make exposures difficult. The eaglet hopped onto a higher branch then in another awkward moment flapped its wings and got to a clear spot which I could see gave it a clear path from which to fly.

Another twenty minutes passed while the eaglet thought about its task and judged distances and possible fight paths things that it must learn quickly if it is to survive. Several times it spread its wings as if to take off but remained in place. 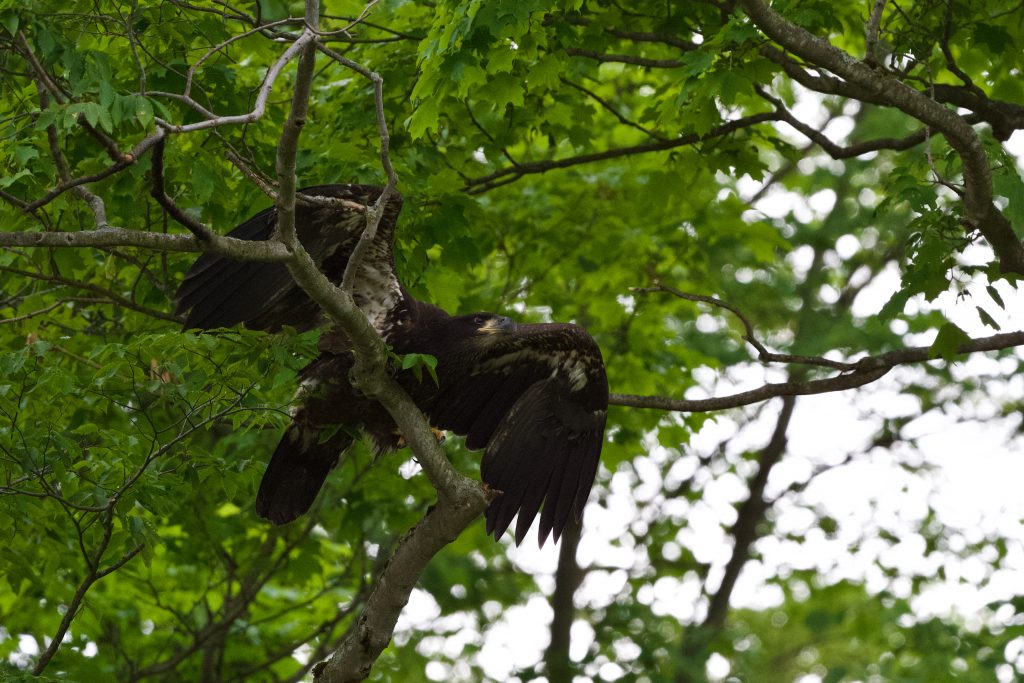 With an adult bald eagle you get very little in the way of clues as to when they will fly – they might poop, they might stretch their wings if they have been perched for a while but when they decide to fly, off they go. Not so with fledglings.

Having summoned up the courage and confidence this eaglet slowly spread its wings and took off through the trees and then smoothly flew away. 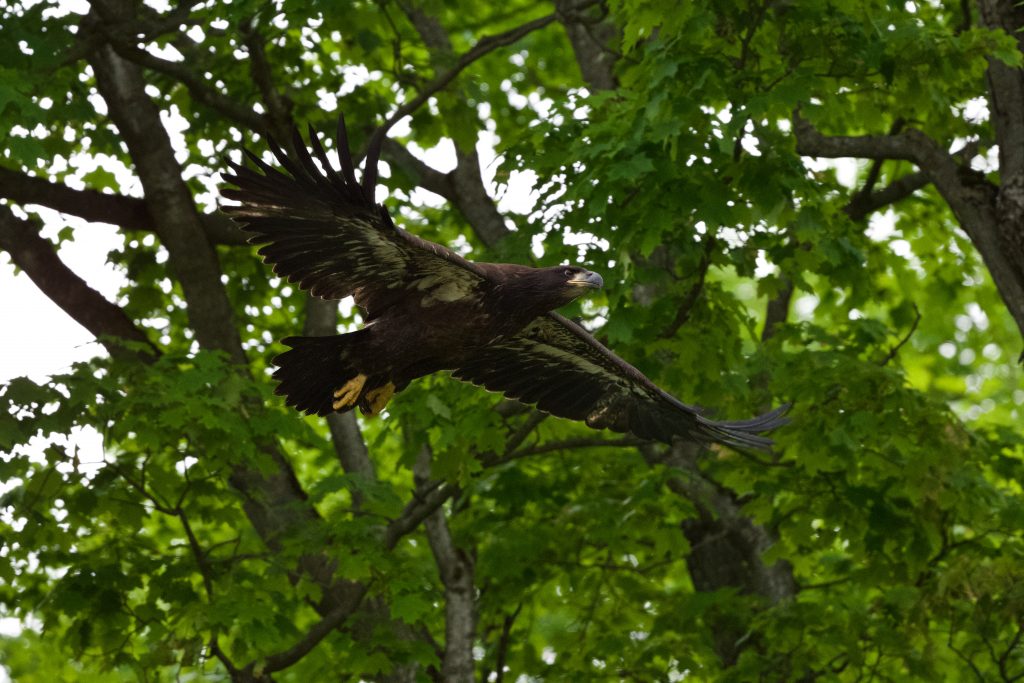 Clearly this eaglet is healthy and will have improved its chances of surviving in the wild where it eventually must compete for food, stay clear of human interference like buildings and utility poles  – and the not so dangerous Baltimore Orioles.