Between cycling, watching Euro 2020 and the occasional feature writing (my feature on Canadian 800m runner Melissa Bishop-Nriagu was on the cover of the Toronto Star sports section last Sunday) I have been regularly visiting the eagles on the Nith River.

You never know what you might find when you spend time in nature.  As I wandered along the river’s edge on Tuesday I was surprised to see the fledgling eaglet I wrote about in a previous blog perched on a dead tree trunk next to the Nith River. It hopped along the trunk flapping its wings while frequently looking up at the nest. 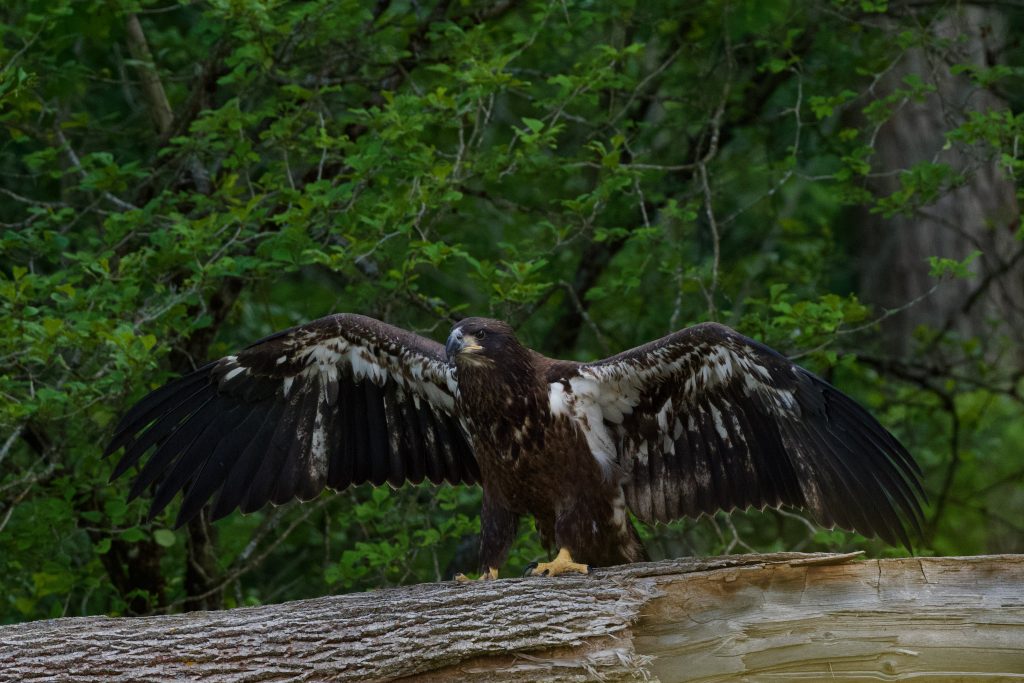 Eagles can be clumsy in the first few weeks after fledging. For the most part, they still have to get back home to await delivery of food from the adults.

This one eventually took off and flew upriver but not far above the water. 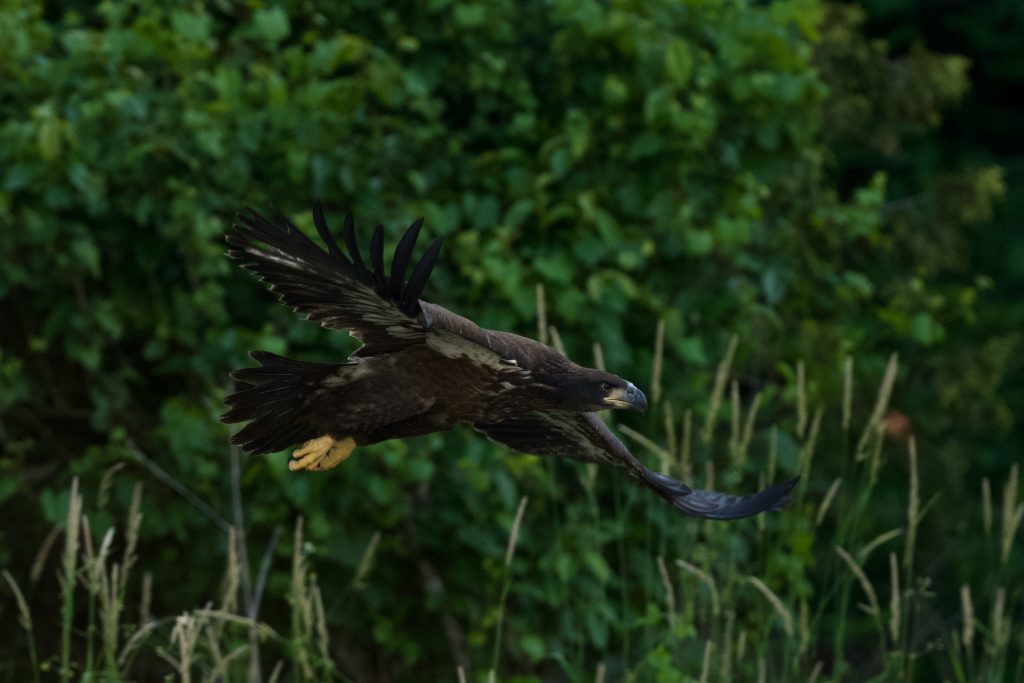 I was concerned it might end up on the ground (and you never know if an off leash dog might be in the area) so I wandered in that direction to look for it. When I came around the bend I could see it perched in a dead tree facing the opposite direction. I made my way through the brush to a spot with a clear view though keeping well back. The last thing I wanted to do was frighten it into making a mistake. Giving it distance and being patient meant it would be less threatened by my presence and would likely fly right past me.

It shifted position and turned towards me. After an hour or so of grooming and of being dive bombed by a tag team of Baltimore orioles it saw an adult eagle approach the nest with a fish. This eaglet started calling out as if to say ‘save some for me’.  I could tell by the way it shifted weight from one foot to another and then held out its wings – as if going down a mental checklist – it was going to attempt to reach the nest. 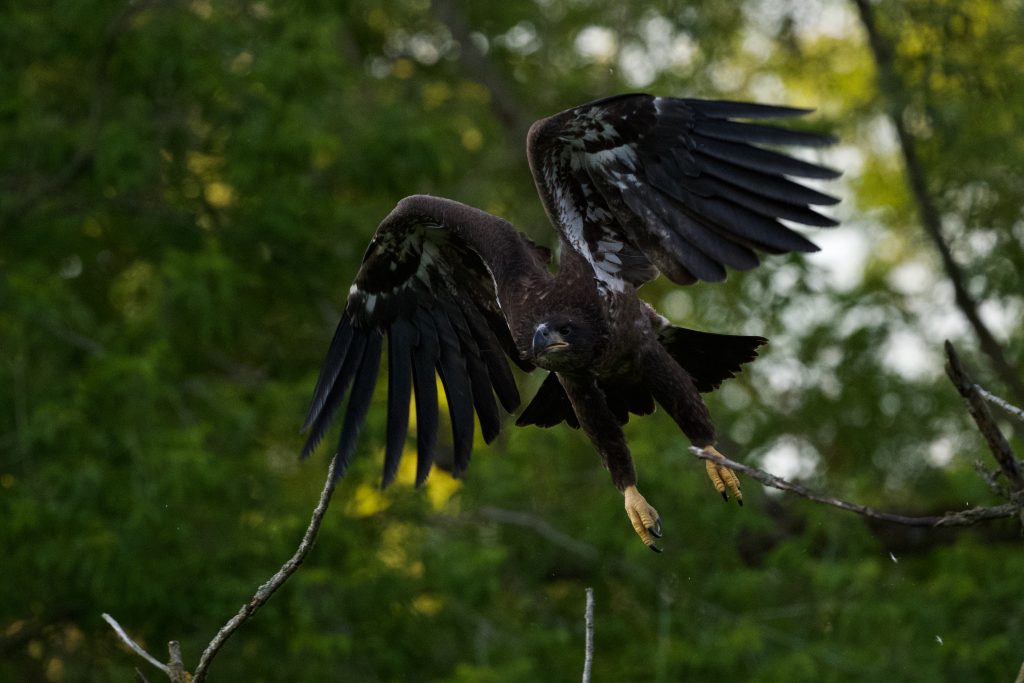 When it took off it flew very close to me then disappeared around the bend. I walked back to the main trail and I could see it in a tree just above the tree trunk where I had seen it originally. I watched for a few minutes then left the area. I was already pushing the ISO on my camera pretty high and the sun had gone down. Besides, I had enjoyed three hours or so watching this eagle on its path to independence and knew I was richer for the experience.

I returned on Thursday and watched as two eaglets sat next to each other on one of the branches which support the nest. Usually this spot is occupied by the adults. Were they bold enough to fly? One did and was almost immediately followed by the second. So, clearly, all three eaglets have now fledged. I watched this pair circle overhead as they practiced turns and then crash landed into foliage that would surely teach them a lesson in choosing a perch more carefully.

One flew into a branch well below the nest and then realized the nest was still too high.  It flew across the river and crashed into this tree and hung upside down for a couple of minutes. 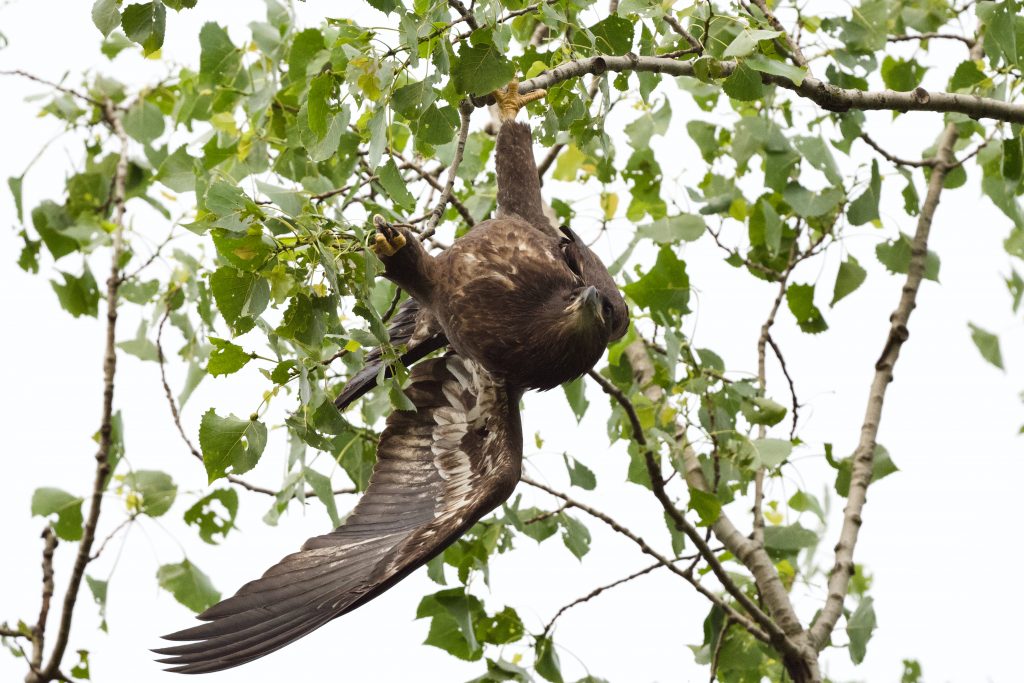 As I took a few pictures the eaglet released its grip and came down towards me flying right over my head. It crossed the river and landed somewhere under the nest. 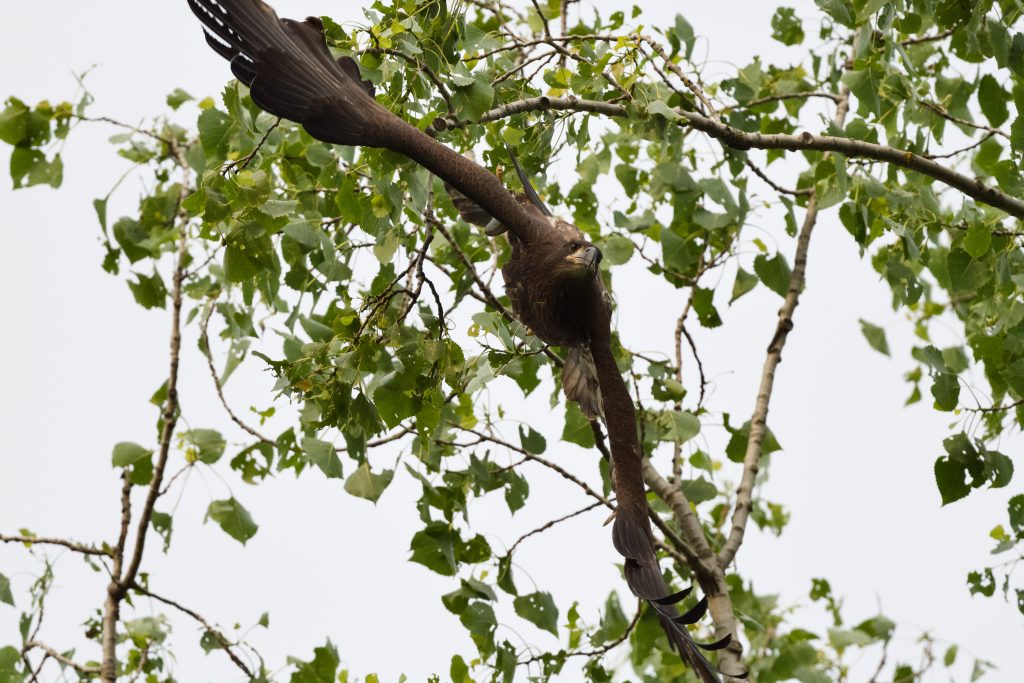 These eaglets are incredible to watch. In coming weeks they will venture further away from the nest and will start learning to fend for themselves. This element of nature is a constant. Along rivers and lakes all over Canada fledglings are setting out. So spend some time outdoors and as my kids say ‘chill’ for a while. You won’t regret it!