Bald eagles normally mate for life. They become mature enough to find a companion and are capable of reproducing when they are around five years of age which is when the white head and tail feathers are prominent.

In addition to a 2017 trip to Haines, Alaska – the bald eagle capital which is literally home to hundreds of eagles – I have spent an abundance of time at bald eagle nests in Brantford, Cambridge and in Ayr.

The pair that built a nest in Cambridge eventually abandoned it without laying eggs apparently. Housing construction was underway in an adjacent field and that, together with the activity at  a longstanding osprey nest, caused them to move. I had watched the ospreys dive bombing the eagles whenever they left the nest, harassing them endlessly.

For six years I focused on the nest inside Brant Park because there was a reasonable chance of seeing the eagles fish in the Grand River. It might have required a lengthy wait – sometimes four or five hours – but I have loads of images of that pair in action.

An adult bald eagle with her catch along the Grand River in Brantford, Ontario ( June 2016). 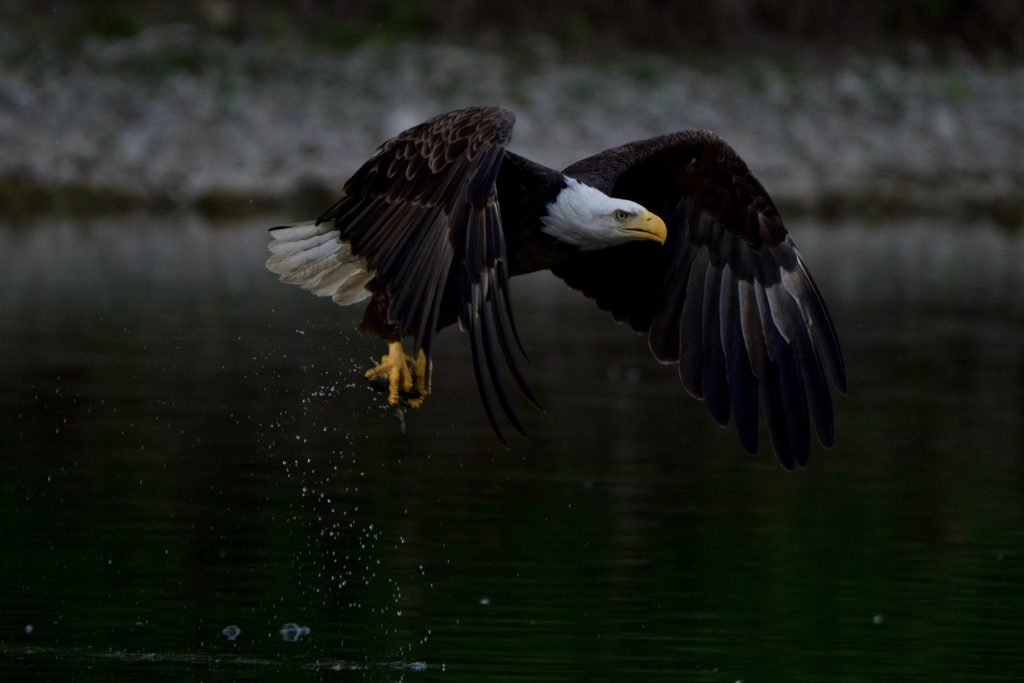 Three years ago things changed down there. Flooding saw the Grand River overflow its edges and made it less attractive for fishing. Despite their ‘5/20’ vision eagles enjoy shallow water to snatch their prey with their talons. The pair started fishing elsewhere and I would rarely see them from my usual viewing point.

A fellow photographer told me she believed something happened to one of the adult eagles and that the survivor took another mate. This couple continued to fish elsewhere. That’s when I switched to the Nith River eagles!

The Nith River adults perching above the water on Thursday. That’s the female on the right – females are larger. 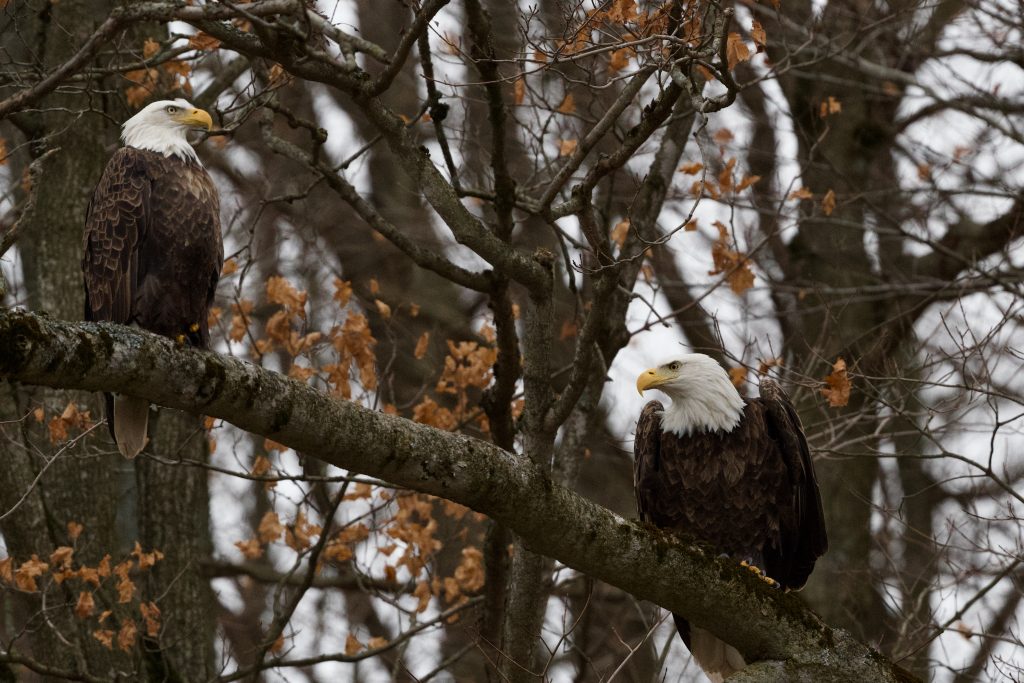 This pair have nested in the same tall pine tree for nine years Ayr residents tell me. In the summer of 2021 three eaglets fledged from the nest apparently bringing to 21 the number of eaglets they have parented. Simple math would indicate that these eagles are at least 14 years old. Eagles can live for twenty years or more. The Cornell Lab reports that one eagle lived to the old age of 38 before being struck by a car in 2015. It had been banded in 1977.

The adult female in flight on Thursday. Her partner followed her momentarily. 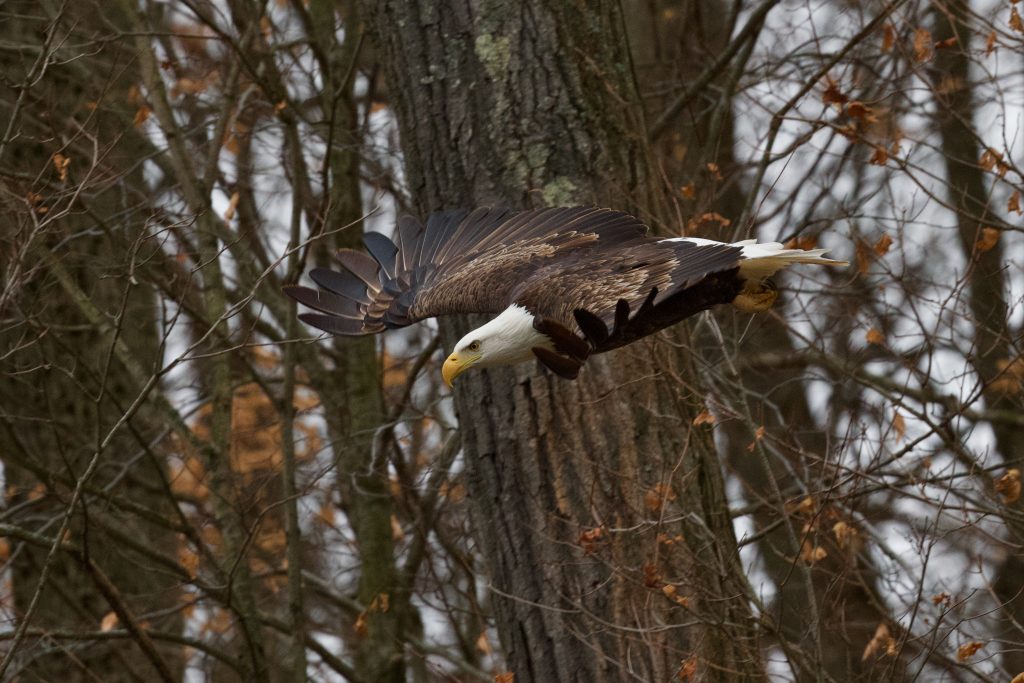 Twice in the past week I have wandered through the muddy trails to observe this pair of eagles and have been successful in capturing a few images. On Thursday I found them perched in a tree together.

A juvenile eagle was with them earlier in the week and also flew past them Thursday. Seeing three eagles just fifteen minutes from my home is always an inspiring event given that this species was endangered back in the 1980’s.

In the coming weeks these adults will soar high above their nest and occasionally snatch branches from nearby treetops to reinforce their enormous nest. They will eventually mate and the life cycle will continue. 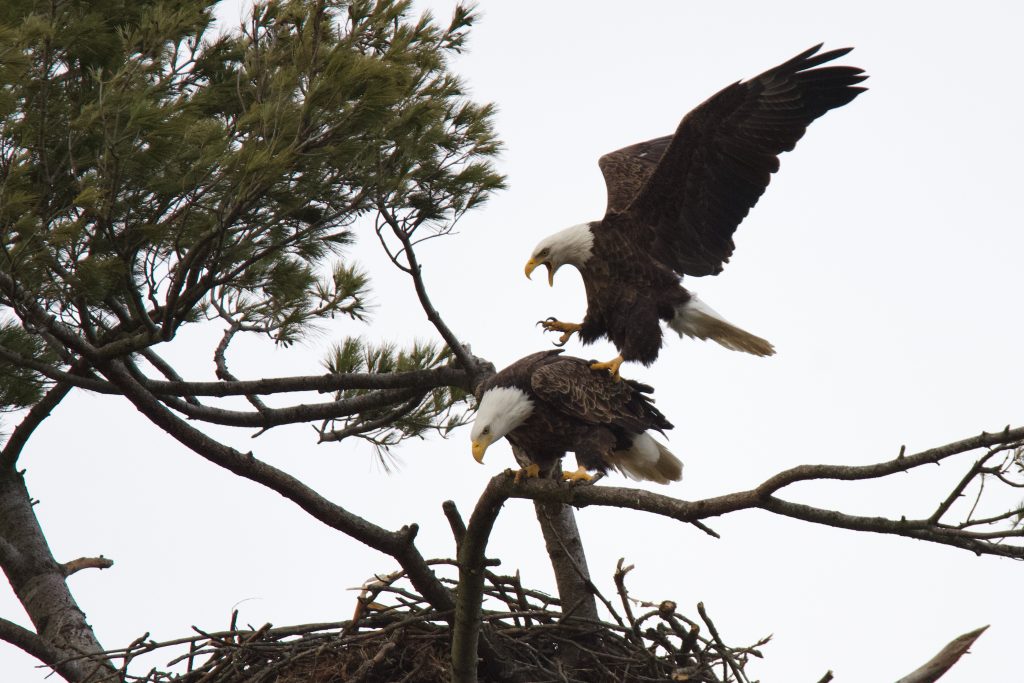 Hopefully, this pair will successfully lay eggs and have more offspring. Despite their history it bears remembering that the mortality rate among eagles in the first year of life is 50%.  Life is tough as their habitat is encroached upon and as climate change plays havoc with nature. But I have faith in this pair – a most beautiful couple!

Adult male eagle taking off a few days ago. 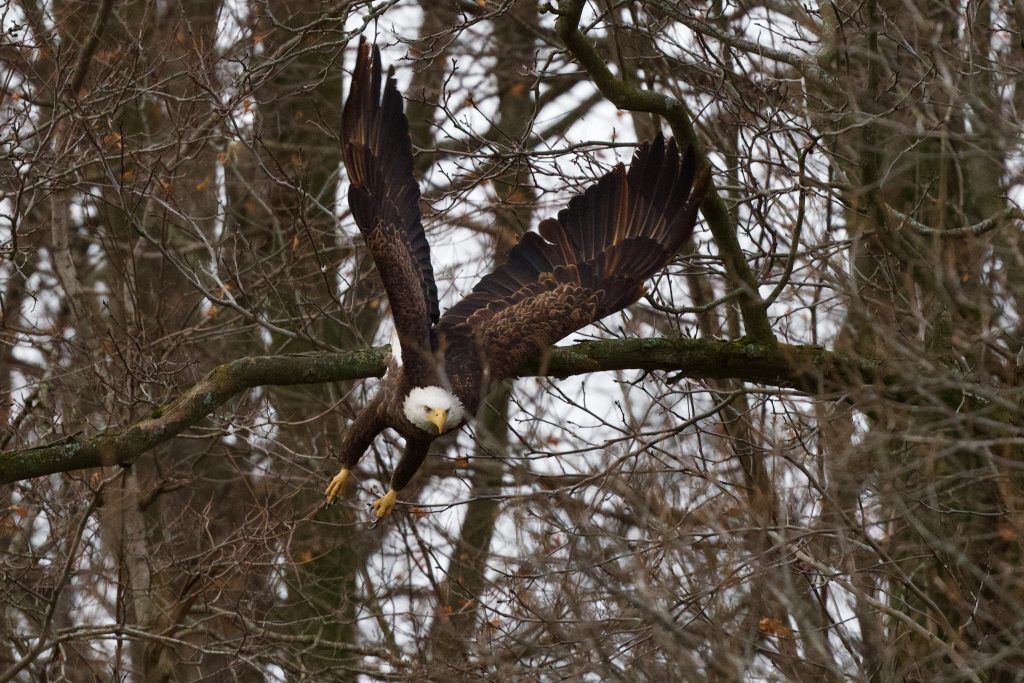