A couple of times in recent weeks I have visited the bald eagles’ nest on the Nith River to see how the pair are managing. This is the time of year where they are reinforcing their nest and mating. I am told that over the past nine years they have produced 21 eaglets. That’s a remarkable feat which underscores their ability in the parenting department.

But they are not the only species planning a family.

There are a couple of beavers practicing their carpentry skills in the area around that eagles’ nest.

While the eagles were keeping to their nest and occasionally flying overhead – in other words not providing extraordinary photo opportunities – I sat down on the bank of the Nith watching the beavers across from me.

At this point the river is only 10 metres wide. They are quite used to people and I have often seen them swimming back and forth. I watched the couple taking turns climbing the snow covered bank and wandering along a path they have created. 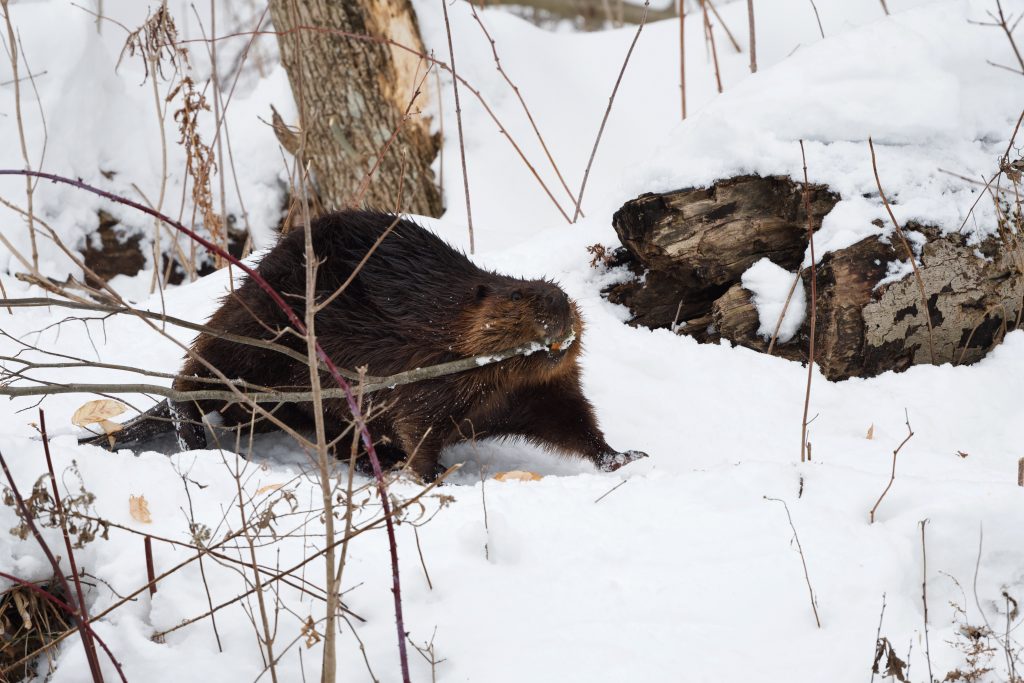 All around there is evidence of which trees they have munched on. Listening carefully – especially when the wind isn’t blowing – I could hear them chewing on wood and then using their weight to pull down branches. Then they would drag them down along the same path they had traversed minutes earlier.

The male is larger and a few times he literally stood up with a branch in his mouth to force the tree branch down the narrow path.

The last section was the sharp decline to the river and I was amused as they put all four feet out and used them as skis to descend through the snow. 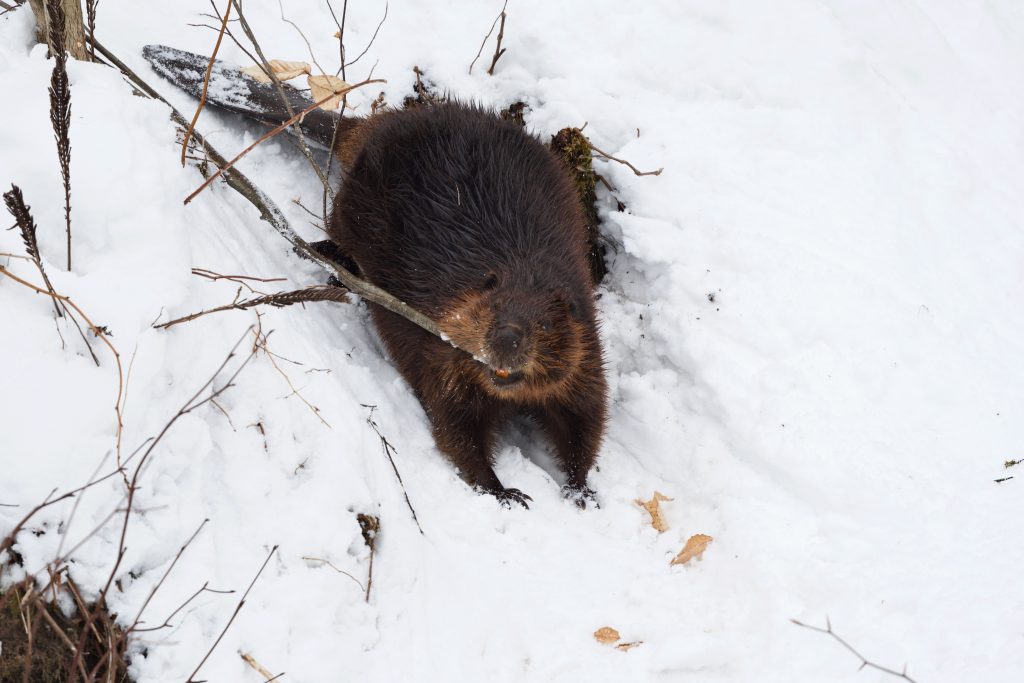 All the time they kept an eye on me, just to be sure. They are powerful swimmers with their webbed feet and that enormous tail propelling them underwater. They can stay below the surface for several minutes. 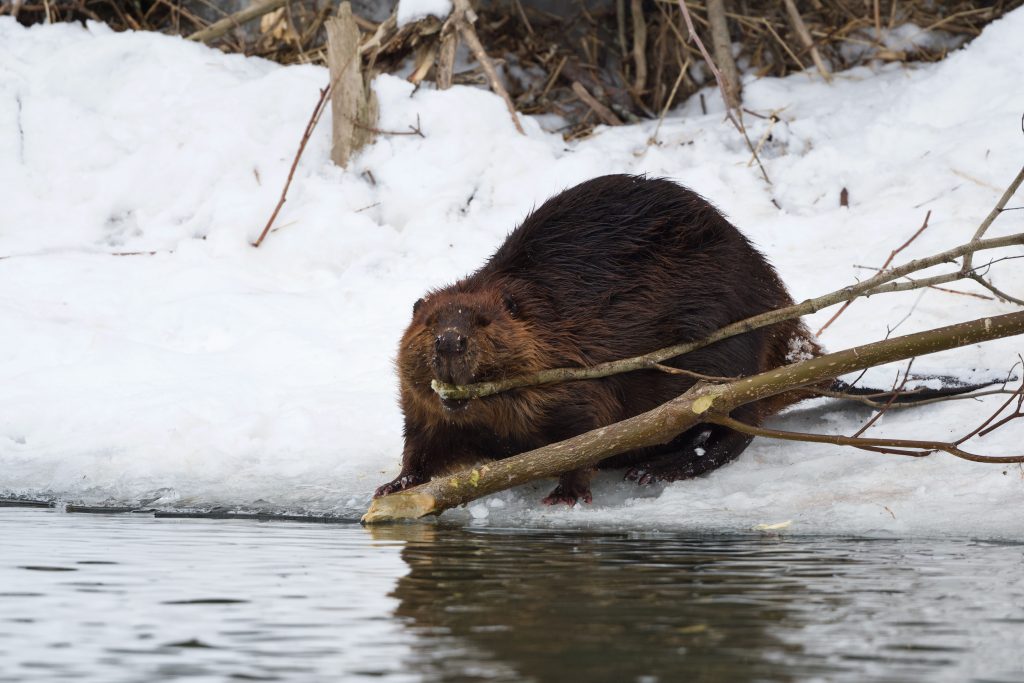 During the hour or so that I observed them I heard the laughing sound of a Pileated woodpecker and the call of a blue heron. This heron seems to enjoy foraging in a stream just off the trail. In fact I am always careful to avoid disturbing it when I make my way to the river.

A muskrat swam past the beavers a couple of times too. They coexist with beavers quite well and will sometimes share food and lodging apparently.

In the snow near where I was sitting I noticed blood in the snow. Coyotes and foxes are no strangers to this area especially at night. I have been lucky enough to capture a few images over the years at this spot. Sometimes I have come across their scat on the trail or have seen evidence of their successful hunt such as feathers scattered across the ground. I wondered what had happened here by the river. Was it a rabbit or a mouse that had provided them with a meal?

The eagles I noticed were sometimes watching the beavers and the muskrat with interest. Would they attack a beaver? More likely they are concerned with the beavers’ propensity to strip the bark of the nearby trees and chew them down. Some of their handiwork is awfully close to the tree in which these eagles have nested the past ten years.

It is an interesting area and a lovely place to enjoy some peace and quiet. As usual I have focused my efforts this winter on the snowy owl visitors that will be around for perhaps another month or more. But popping over to see the eagles I never know what other species or experiences I might have.

And, of course I will begin spending more time there when the eagles have laid their eggs. The past two years they have had three eaglets fledge. Will they be as successful this year?

I hope you are all staying healthy and sane in these trying times. Getting out in nature is a sure fired way to help! 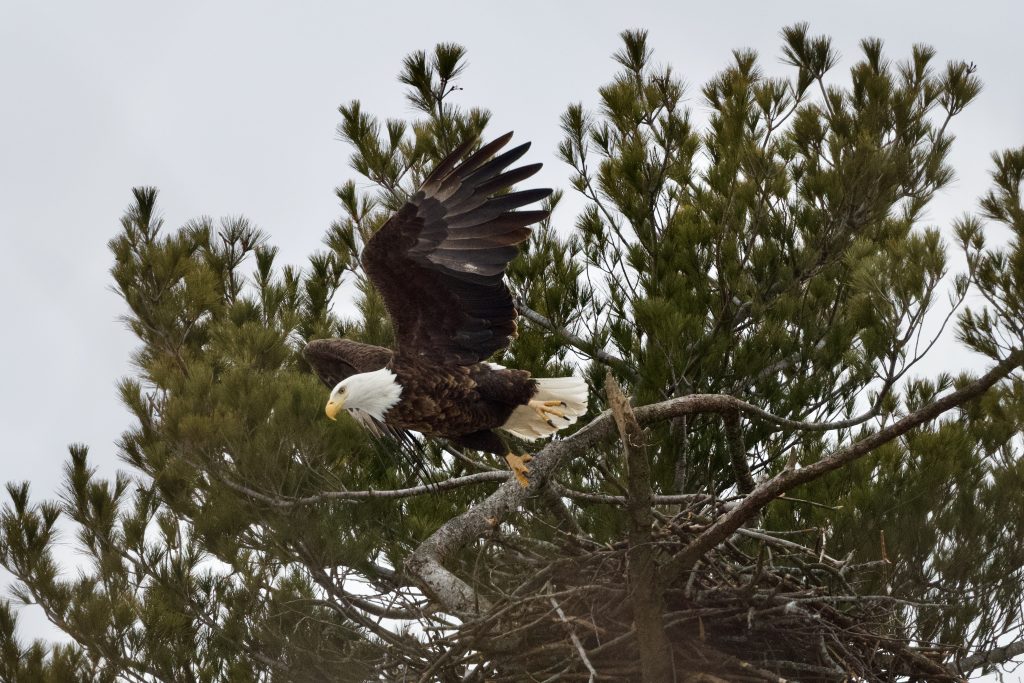