As I pointed out in my previous blog I have realized there are two adult male owls in ‘my’ hunting area.

It is always exciting to come across an adult male. They are almost always pure white with little evidence of the barring their feathers carry when they are immature. But they can be challenging to photograph.

Smaller than the females they don’t hang around to be picked on or to have their prey stolen by the larger birds so they sometimes disappear for a few days. But, I am happy to report, I found the one featured in my January 4th blog perched on top of a utility pole a few days later. So I left my car on the road and walked an arc around the bird keeping back maybe 40 metres so as not to spook him.

Snowy owls, like most raptors, normally roost or perch facing the wind. There is evidence too that Snowy Owls also orient themselves towards the sun. Knowing this I chose a position in the farmer’s field that I hoped would offer me a chance to photograph him if and when he chose to move to the field behind me. I had seen him hunting there a couple of times this winter.

After preening for half an hour or so he stretched out his wings, one at a time, hinting that he was thinking it was time to move on. He looked to one side and I guessed he was keeping his eye on a female I had seen about a kilometre away. Then he looked to the other side. Another photographer had told me a female was perched on a grain silo about 2.5km away. He was not likely to fly towards either of them and face a confrontation.

I trained my lens on him and waited. Ninety-nine times out of a hundred an owl will choose a flight path that puts space between it and a photographer. Incredibly, he came down off that utility pole and headed straight at me. Not in my general direction, but straight at me! 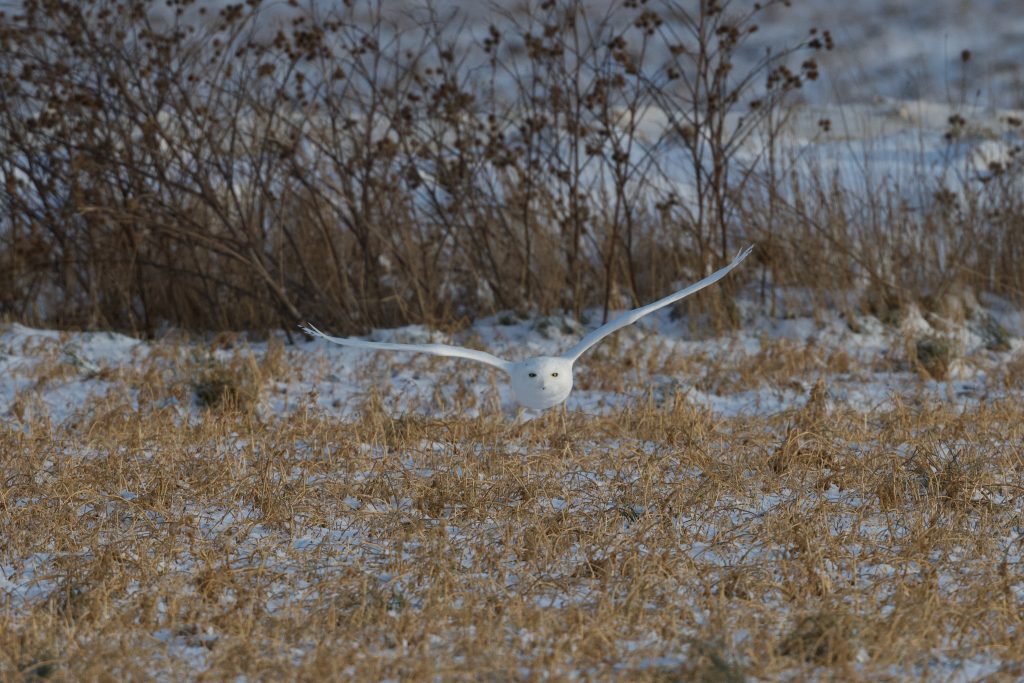 There was still a bit of sunlight left as he silently approached perhaps three feet off the ground. Through my camera I could see his big beautiful yellow eyes fixed on me and I remember thinking ‘Oh, this is going to hurt?’ 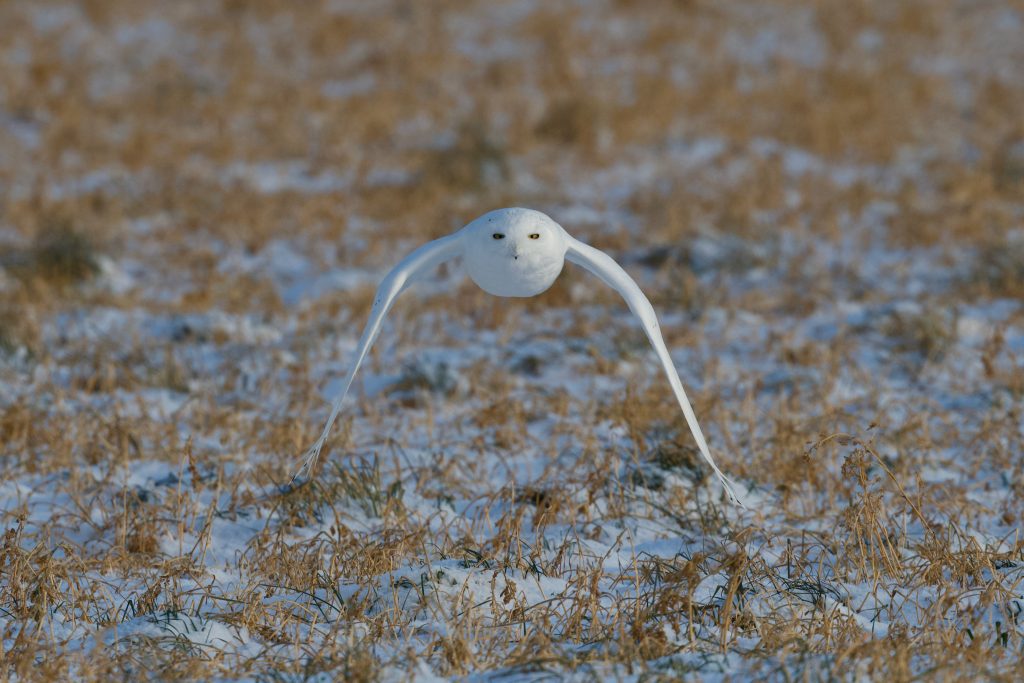 I have seen videos of snowy owls attacking humans but this has been in the arctic breeding grounds when someone gets too close to a nest. Still, those talons can do a lot of damage. 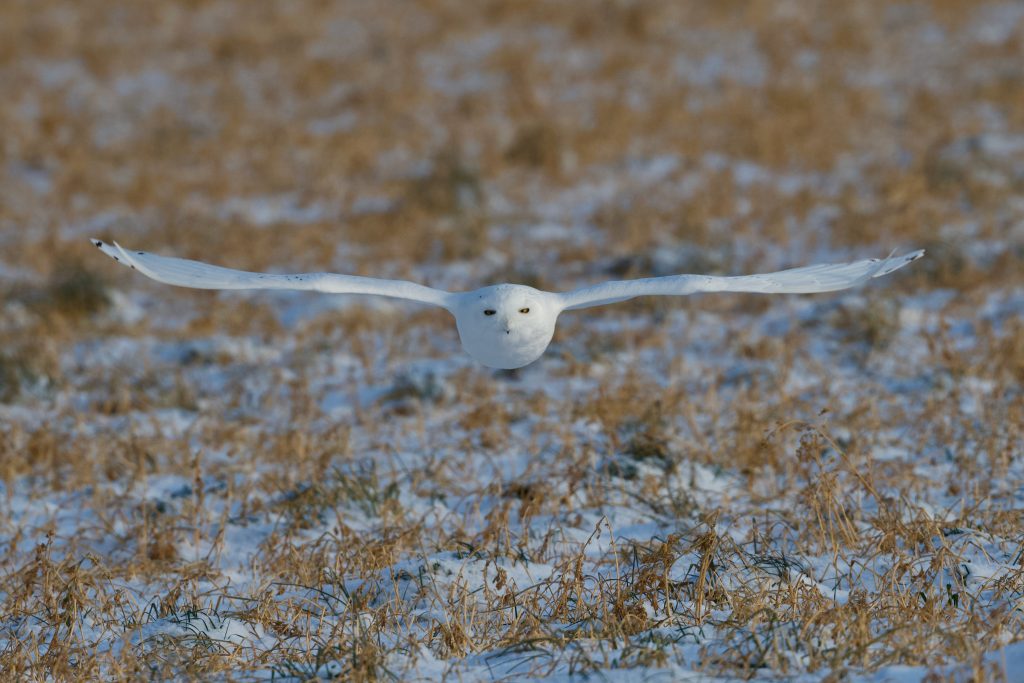 But at the last moment, perhaps because I didn’t move an inch, he veered slightly to my left and then climbed a bit higher. He was maybe two metres (6 or 7 feet) away. I stopped snapping images because it would have been pointless with a 500mm lens – he was just too close! 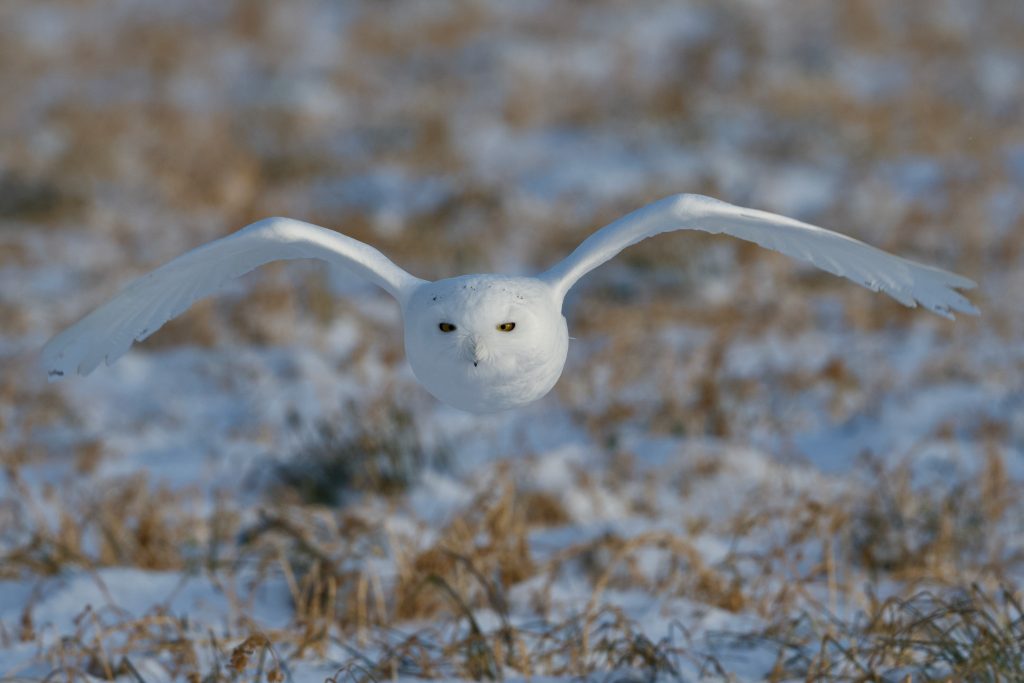 I turned to see where he would land. He found a spot on the ground about 200 metres away. Overjoyed by this extremely rare encounter I looked at the images on the back of my camera hoping that they were, indeed, as sharp as I believed they would be. They were. So I walked back to my car with a grin on my face.

The excitement hasn’t diminished since that afternoon. Encounters like this are extremely rare and I am incredibly fortunate to have been there in that magical moment. Moreover, I know that despite the many, many hours I spend with snowy owls,  I may never have such an encounter again.

The lesson I am taking away here is to be patient, be aware of your subject’s habits and above all keep the subject’s best interests at heart and sometimes you will get ‘the’ shot!