Faithful readers will know that my last blog was a little over a week ago at which time I reported on the three bald eagle fledglings along the Nith River in southern Ontario. The female bald eaglet that had been trapped on a branch beneath its nest for seven days had finally fledged – for real.

Several folks have emailed me asking about her progress………………

Her two siblings have been flying along the river having mastered the winds although one is still working on his landing. A few times I have seen him crash into branches too small to hold his weight and wind up falling end over end. Somehow he bravely finds his way back to the nest when the adults serve fish for dinner. This is normal behaviour.

Screeching the whole way, this eaglet is en route to the nest for a feast: 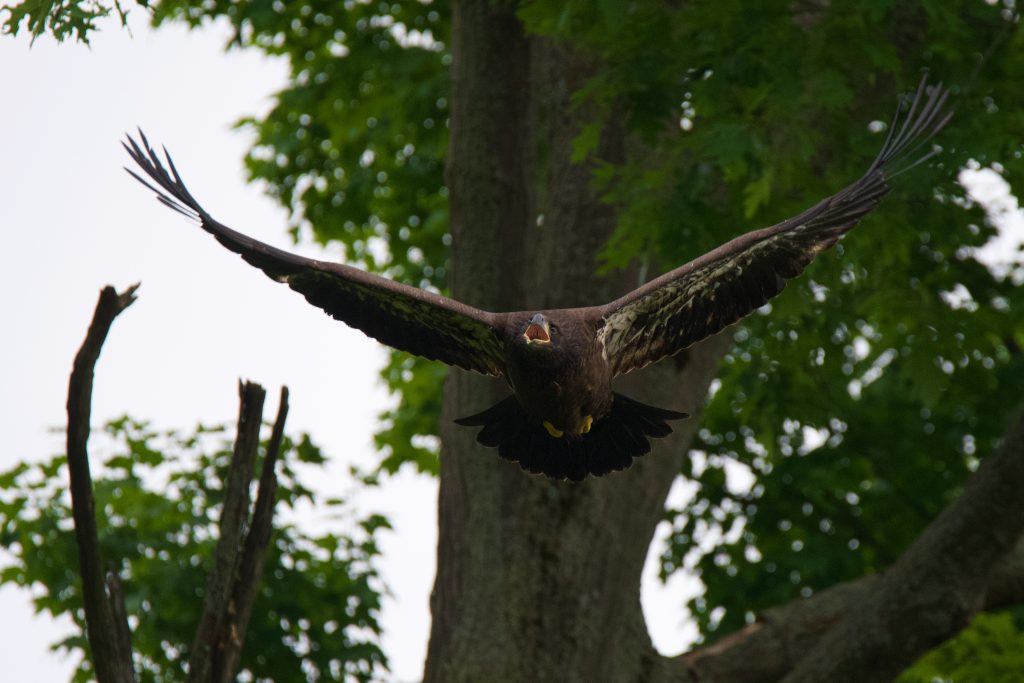 But the bald eaglet ‘formerly known as the ‘trapped’ eaglet is the one I have been most concerned with. A few photographers feel the same way about her as I do – she is beautiful with thick layers of flight feathers – and we hope that she survives her infancy. The mortality rate amongst first year eaglets is 50% hence the concern!

Throughout the week she has flown between trees and has made it back to the nest, which I should add, is incredibly high above the river.  The adults know they have their work cut out for them in getting the necessary height, especially during high winds, in order to reach the nest. That has given me hope.

Here she is, a few days ago, en route to the nest having clawed her way to the top of a tree: 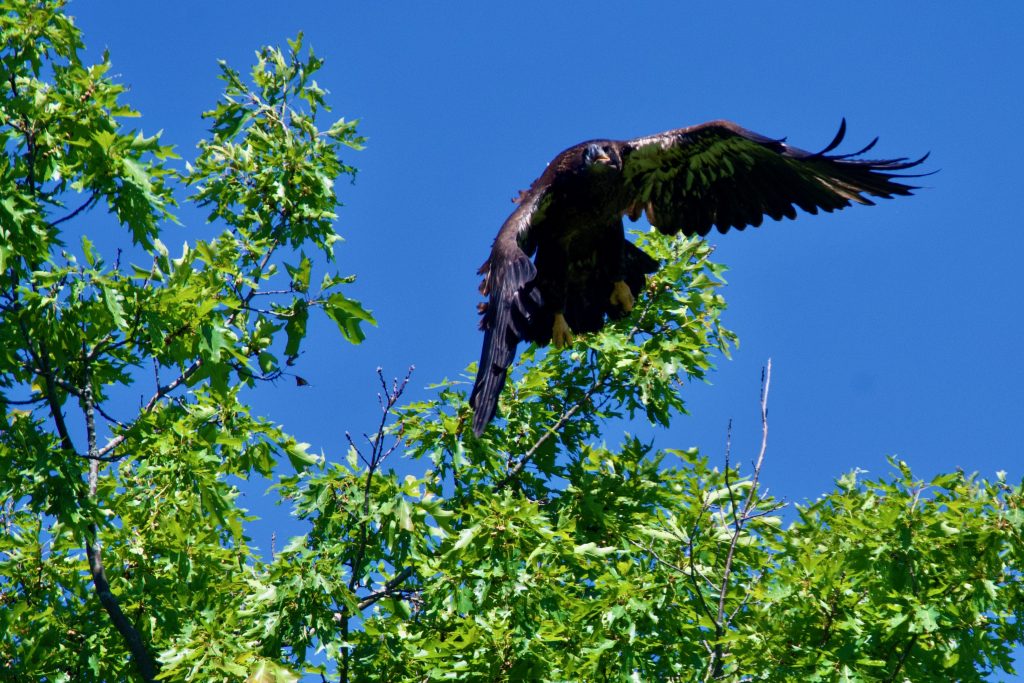 Earlier today I went by to see how all three eaglets were doing following the recent torrential rain and thunderstorms. I was shocked to see her on the ground next to the river and my heart sank.

While I have seen adults in other locations come down to river edge to bathe this is no place for a young eaglet. The beach where she was perched is a common party ground for local teens many of whom have little regard for the wildlife as they noisily break off tree branches to feed their bonfires and play their music loud.

My sudden appearance frightened her and she flew across the narrow river landing on a sandbank. I am not sure she knew what to make of the texture of the sand but she tried to climb the sandbank – with little success. I snapped many photos of her on the bank as she tried to figure out what to do. I will bet her siblings have not experienced this problem.

Figuring out what do do next: 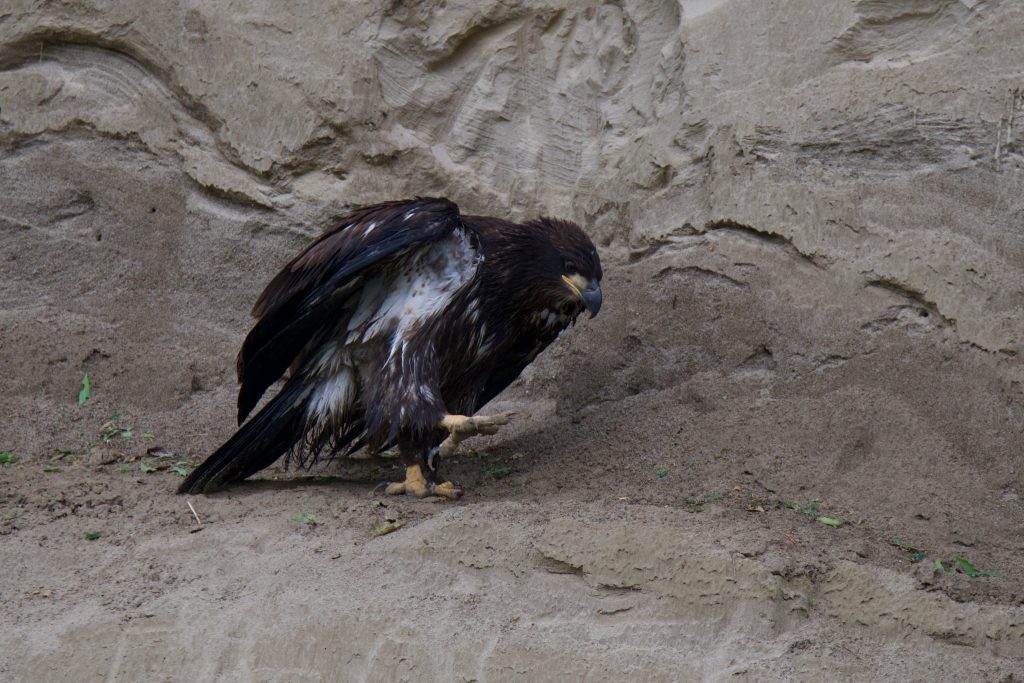 She seemed to be weighing all her options and I backed up to give her some space, hoping that she would be able to get some height and land in a tree somewhere. Occasionally she looked at me. Then she looked up, to the side, turned around, tried to climb again. Then I could see she was going to fly.

Heading to the safety of a tree: 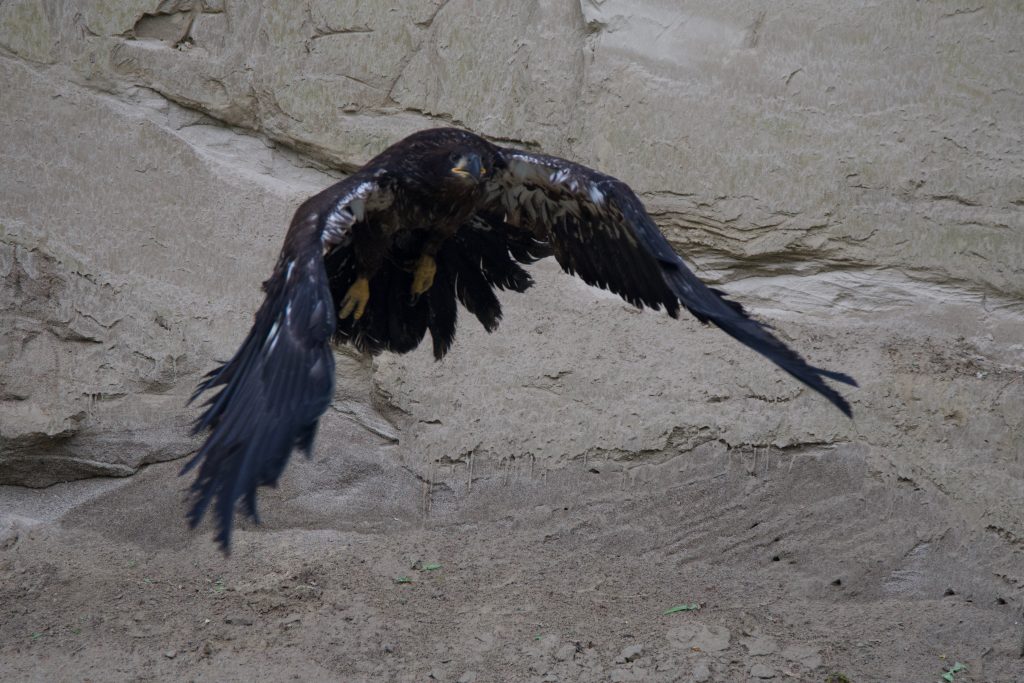 Like her siblings she had trouble getting much height. Indeed, they all seem to break up the flight back to the nest with stops at trees of varying altitudes. But I was delighted to see she turned and headed for a nearby tree – and crashed through the foliage. Her screeching became more frantic when the adult female returned to the nest with a fish. The other two eaglets jumped into the nest and dined while the adult flew down to a nearby tree to watch my favourite.

I watched both of them for an hour but when the adult flew I decided to call it a day. I hope that the adult female brings her a fish as she has reportedly done a few times this past week and that she can make it back to the nest today or tomorrow.