For the past week I have been watching an immature Cooper’s Hawk hunting in the woods out behind my apartment building. On first glance I had thought it was a Red Tailed Hawk as it is of similar size but the tail feather colouring give it away. I have a perfect view from my balcony of hawks,  a variety of woodpeckers and other interesting species. 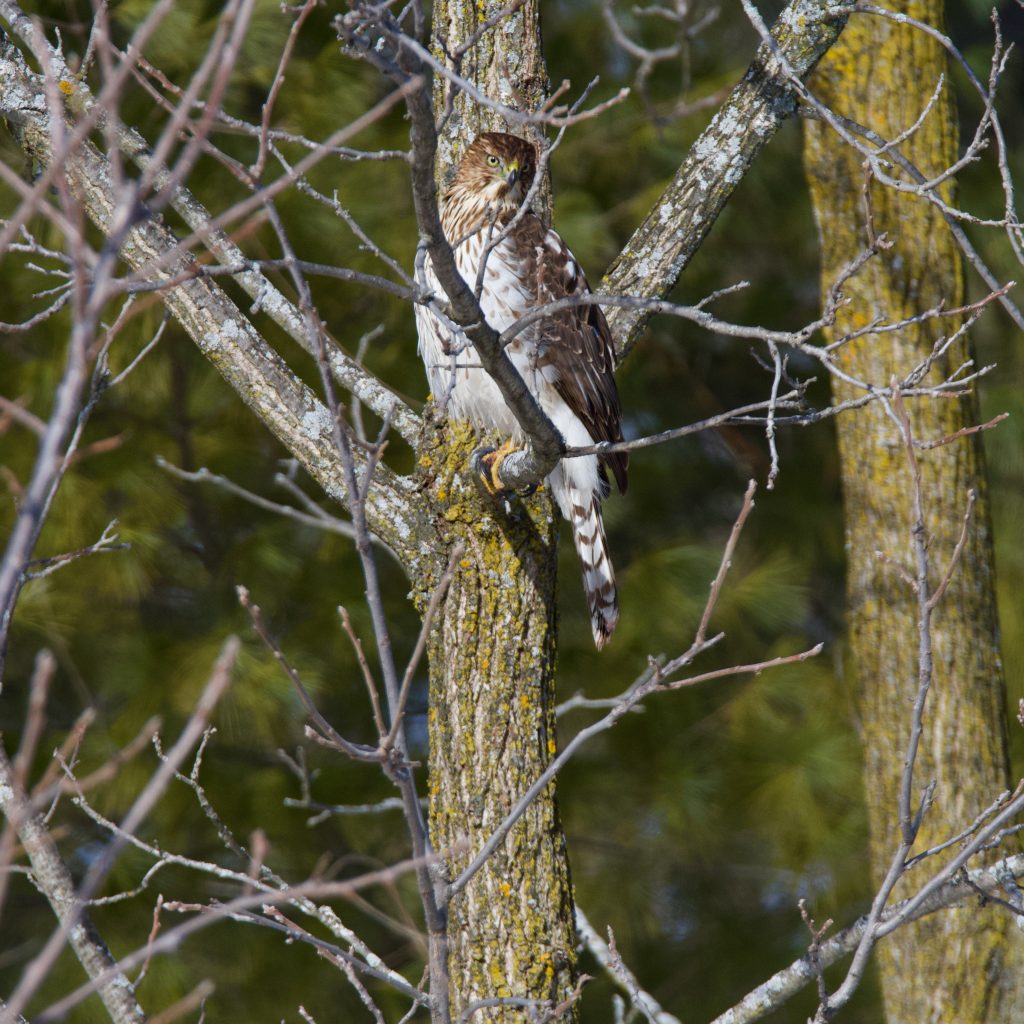 As I hope I successfully conveyed in my Zoom webinar last night for Idea Exchange we have lots of interesting wildlife here in Southern Ontario that compare favourably to what one might see in foreign countries.

This morning the hawk moved around the trees before settling on a spot overlooking a clearing. Adult Cooper’s hawks are capable of hunting smaller birds such as mourning doves and other species which gather at the bird feeders my neighbours have erected.  These hawks will also go after mammals, mice, voles and even squirrels. At one point, though,  I watched this one get spooked by a squirrel which dared climb up to the same branch as the hawk. It made me wonder if the squirrel would be so comfortable with a more confident adult hawk.

The hawk spotted movement on the ground about 30 metres from the building and launched itself like a bullet through the tree branches. This time it was silent but I have heard it crashing into branches on other strikes. 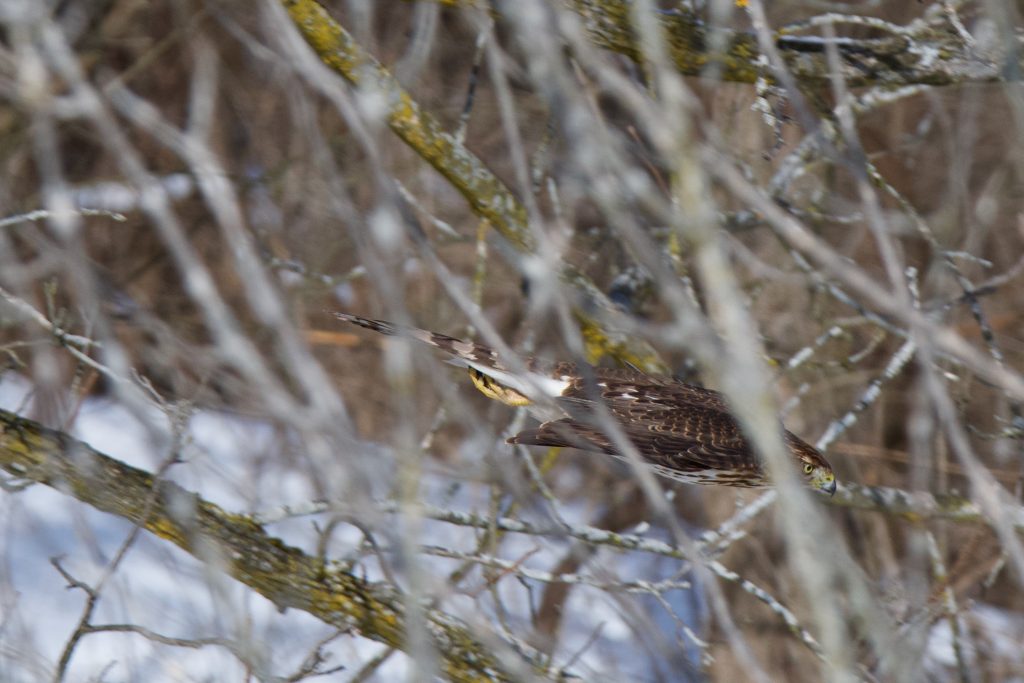 Landing on the ground it began tugging beneath some grass as if there was a vole or mouse hiding. It spent a couple of minutes foraging then started looking around. It poked its beak into the grass a couple of times and seemed to be chewing something very tiny. It wasn’t a whole mouse that’s for sure. 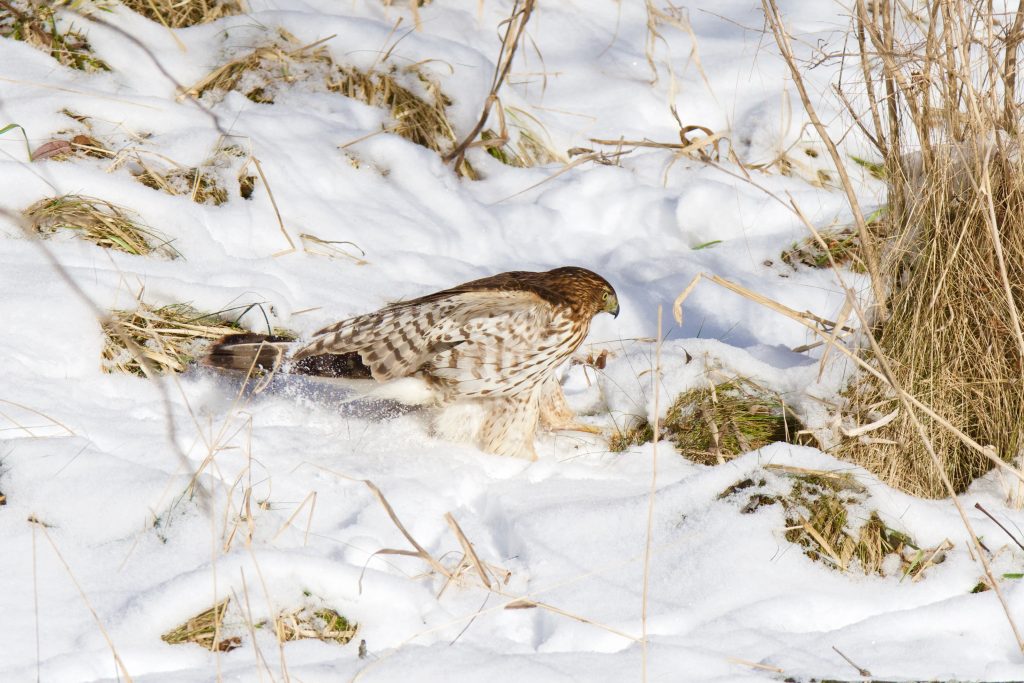 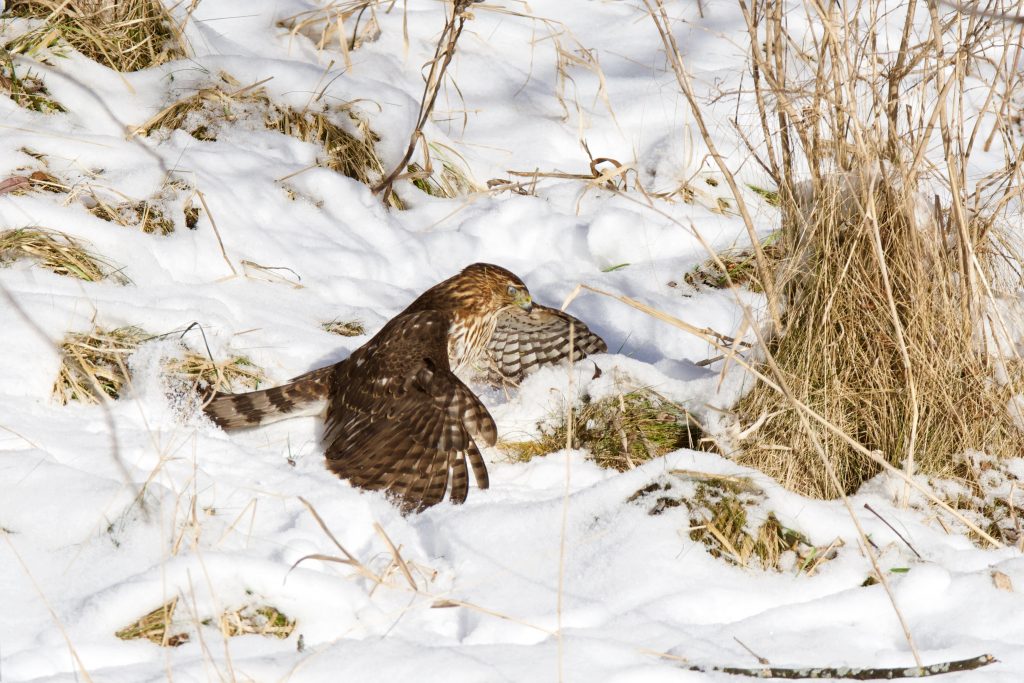 A barking dog seemed to distract the hawk from its purpose and it flew back into a tree. Yesterday I had seen it perched and ready for action even though a woman walking her dog up the hill approached nearby. The hawk just sat there.

After a few more minutes the hawk flew around the building and vanished. No doubt it will be back tomorrow or even later today. It’s a tough way to live. I wish it luck. Here’s to enjoying wildlife in our neighbourhoods!