I wasn’t planning to write a blog on my favourite eaglet so soon but I want to share a wonderful experience I had with this bald eagle yesterday morning. But first a little background is in order.

The female eaglet the day she finally emerged from her ‘trap’ in a tree branch beneath the nest (June 14, 2020) 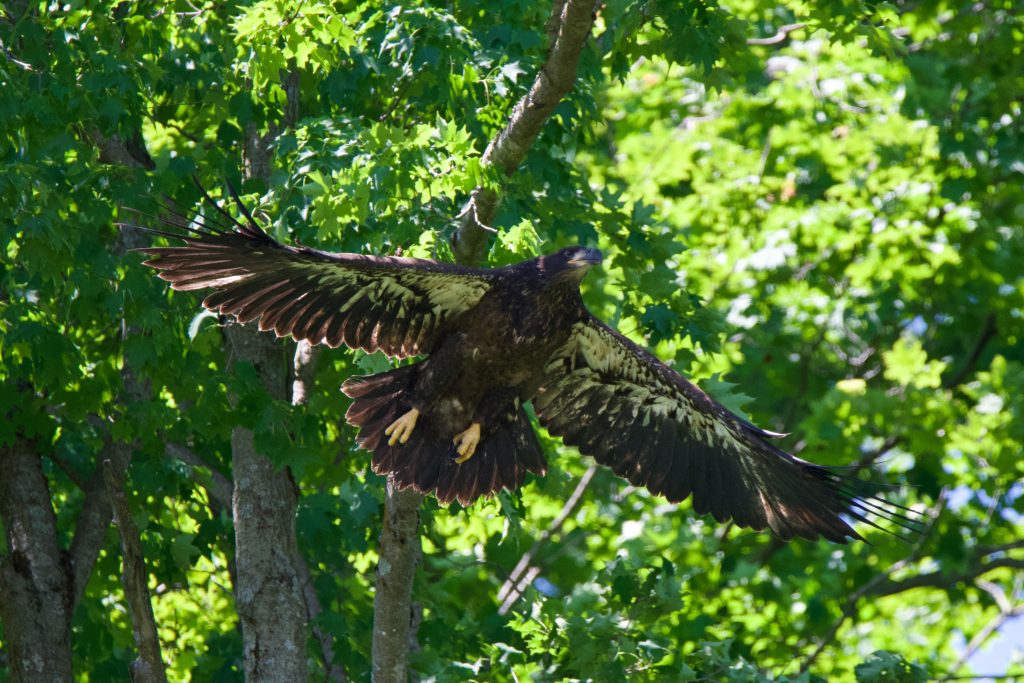 Less than twenty four hours earlier (Saturday morning) I had left the site exasperated,  to say the least.  Two other photographers and my son Owen, I am sure, felt the same.

We had been watching the eaglet perched on a tree branch hanging low over the river and were waiting to see if she would fly a hundred metres down the river to join her siblings or fly to the nest. As usual she was calling out. The other photographers had been watching her for two to three hours by the time Owen and I arrived.

After an hour or so a boisterous crowd of about six adults, four young children and five off leash dogs made their way through the woods on the other side of the river and, unwittingly, walked straight towards the eaglet. When the river is shallow a pebble beach is revealed. This is where they congregated. Owen who doesn’t often come out with me was stunned and said “Can they not see the eagle above them?”

Eventually it occurred to them that all three long lenses were trained on the eagle but, instead of backing off or quieting down, they surrounded the poor bird taking pictures with their cell phones. One fellow was standing almost below her looking up.

I shouted out “You’re too close.” The response was “She doesn’t seem to be bothered by us.” That was followed by  “These photographers think they own the river.’ I will add that a week ago this same lady, upon arriving with her group, had walked over to me and announced: “Your quiet time by the river is over.” I had no idea if she was trying to be funny or it was an apology for disrupting my solitude. I just shrugged my shoulders.

Now, I happen to believe that we should all get out and enjoy nature. I meet many people down by the river, kayakers, people walking their dogs, teenagers hanging out, most of whom are thoroughly excited to see these eagles.  But, unless you are in bear country, you should be mindful of one’s surroundings and keep noise to a minimum.

Anyway, I was watching the eaglet through my lens at 600mm and it was clear she was looking for an escape, nervously turning this way and that. This is the eaglet, remember, that spent her first seven or eight days outside the nest trapped on a tree branch. She is still not showing the confidence her two siblings have.

Well, there was nowhere for her to go but deeper into the woods and away from the river. That’s what she did. There was a collective sigh of disappointment from the ‘snappers’. It’s one of the things you deal with as a wildlife photographer. You can have good light, a good view of the subject and a good angle and then the wildlife doesn’t cooperate. You accept that. In this case the crowd spooked her.

Owen and I said goodbye to the other photographers and left. Now to my delightful experience…..

As I approached the river Sunday I could hear the eaglet calling out from the same tree branch we had seen her on previously. This time I was completely alone. As I rounded the bend and she came into view I was astonished to see one of the adult eagles perched right next to her. When I tell people I believe this eaglet is a female – which are generally 30% bigger than males – I base that on a hunch. To see her next to the adult it was clear she is gargantuan!

The adult flew down river about thirty metres and landed in the river. After taking a drink and looking back to its offspring it took off vanishing around the next bend. A half hour later it returned with a fish in its talons and went to the nest. After another ten minutes and, having given the eaglet the chance to come and get the food, it flew down, landing next to the eaglet. 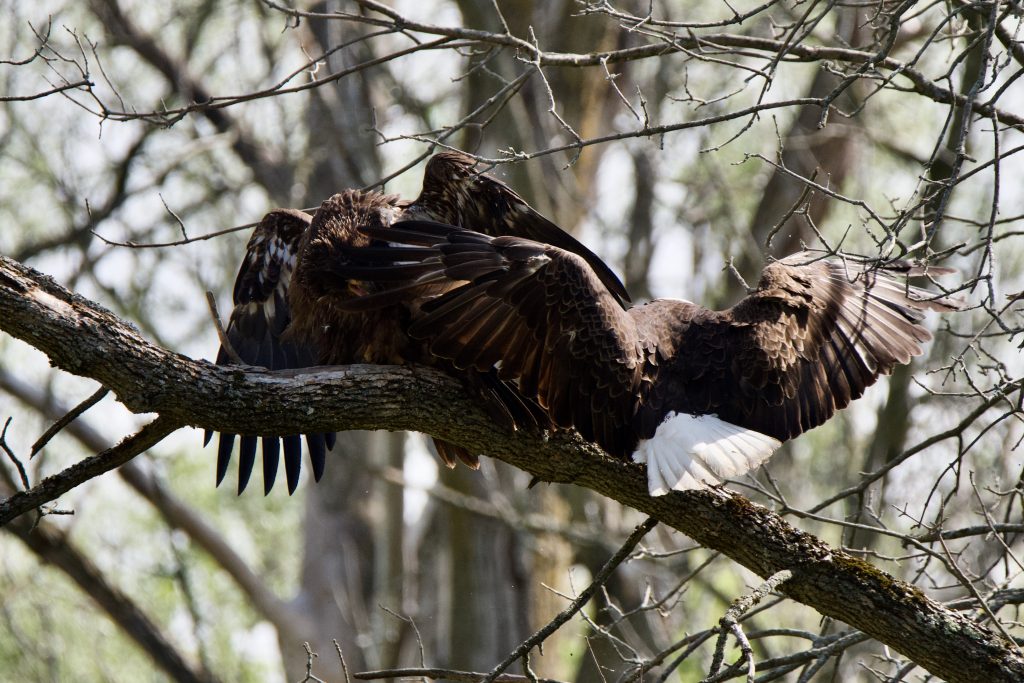 Of course the youngster was delighted and she snatched the fish away from her parent. This time the transfer had been successful. While the adult flew down river for a bath she gobbled up the catch.

The eaglet with the fish in her beak as the adult prepares to leave her to dine. 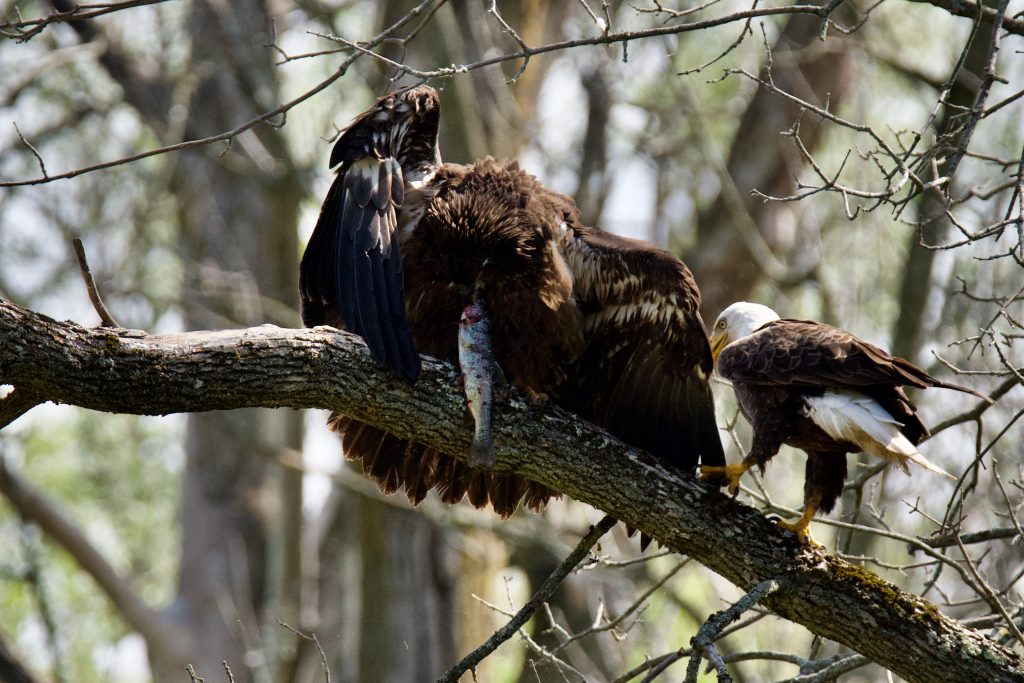 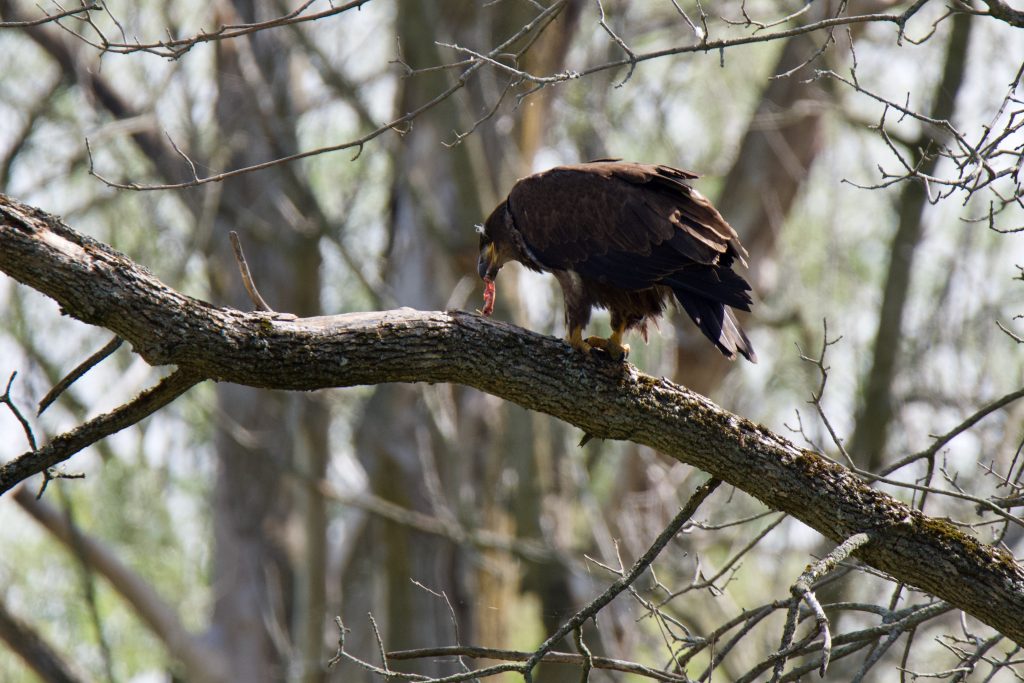 A short while later couple of kayakers, who are local residents, came up the river past me. They stopped to chat about the eagles obviously pleased that these magnificent creatures are so near to their homes.  When they reached the eaglet they each moved past, dragging their kayaks across the pebbles below her perch. They didn’t stop underneath her.  The eaglet tolerated this. After the pair had vanished up river she remained in place digesting her meal.

Eventually she decided to look for some shade as the temperature was about 30C and she was in direct sunlight. I could see she was mapping out her route to a tree beneath the nest and I was in the right place at the right time. Again, one on one, many animals and birds are comfortable. Flying past me as if I was invisible I managed a few nice images before she was too close, perhaps five metres from me.  She headed into the protection of thick foliage beneath the nest.

The female eaglet flying past me. She came within five metres. 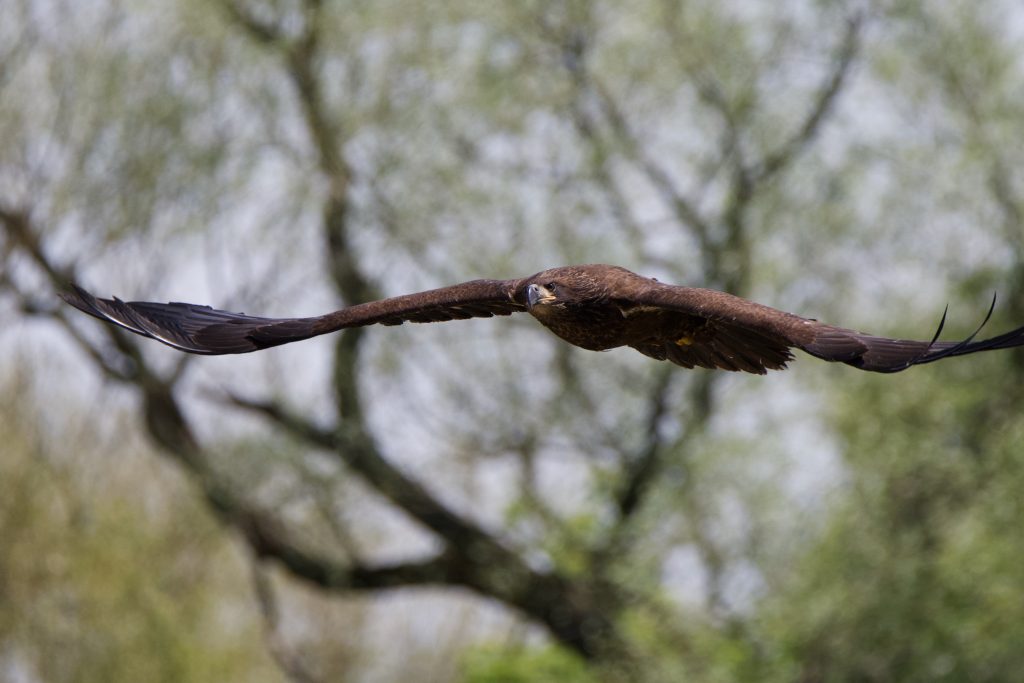 I have high hopes for this beautiful eaglet. And, to see the dedication of the adult bald eagles in nurturing her and protecting her is truly remarkable. Nature is full of beautiful moments!