It’s frightening to turn on news outlets these days and be inundated with details of the Covid – 19 pandemic. Everyone is impacted in some way. As most of us learn to practice social distancing – something unnatural to our culture – we can take some comfort in getting outdoors for daily walks or nature encounters. I see people walking their dogs and it must be extra special to get out with man’s best friend these days.

While I miss seeing my three grown up kids – and my five month old grandson – I find mental stimulation from spending time in the farmlands with the snowy owls, that have been calling southwestern Ontario home since November. They will soon be heading back to their arctic breeding grounds.

Apart from filling up with gasoline, and my occasional trips to the grocery store, my only live encounters with human beings seem to be the friendly waves of the farmers and Mennonite families I see from my car, or, from the middle of a field. I have been frequenting their region for the past seven winters now and met many of them. I’m embarrassed to say that some have even helped pull my car out of snow banks on those occasions when I have been unable to see where the road or driveway ends because of deep snow.

One lady told me her kids call me ‘the owl guy’.  A month ago I stopped to speak with a teacher at one of the small Mennonite schools as she supervised children skating on the school’s outdoor rink. Curious, they gathered around to look at the images I had just captured on my trusty Nikon D500. I pointed out an adult male owl on a fence post a few hundred metres away.

I have gotten to know some of the people up there by first name. Leonard, whose fields seem to always have owls in them, was amused when I responded “yes, I am.” when he asked if I was the journalist who wrote a piece on snowy owls for The Record newspaper a couple of months ago.

I miss the encounters with these folks during this crisis. But seeing the most beautiful species of raptors – in my view at least – several times a week is consolation.

Today I spent two hours trying to spot an owl. Normally, there are four or five in the area I go and this two year old male, which I have encountered a few times this winter, was the only one I saw. I don’t know if the others were roosting out of sight or have begun their migration back to the arctic breeding grounds or not. This little guy was perched on a utility pole along a dirt road which is not maintained in the winter. So I parked my car and walked a few hundred metres down the road to see if I could get some action shots. For another two hours he preened, pooped, watched movement in the neighbouring fields but didn’t fly. I have seen him catch mice in the ditch but have not been quick enough to get a clear shot. I remain hopeful.

Anyway, the sun had gone down and I pushed my D500 to ISO 4000 to experiment. I must admit, after two hours in poor light and with the temperature dropping fast, I was also thinking of what I was going to cook for dinner when I got home instead of concentrating on the tell tale signs of flight. Suddenly, he took off and flew away from me. As I watched him through my viewfinder I saw him turn and circle back. I couldn’t believe my luck. He flew straight past me and crossed the field and vanished. Patience was rewarded again.

Stay well, people. Let’s hope that this pandemic IS indeed seasonal and that the scientists working on a vaccine are blessed with both luck and patience.

Here is the two year old male snowy owl coming past me tonight: 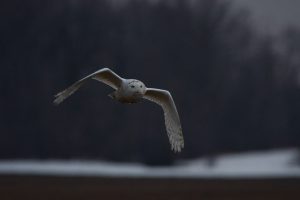 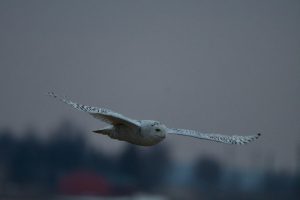 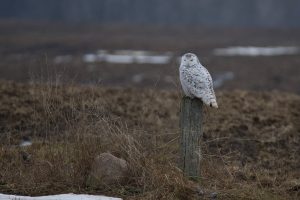 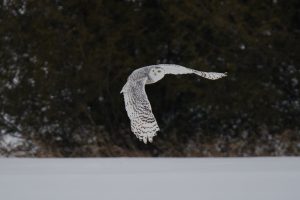 Adult male snowy owl at sundown. He perched on this fencepost for two hours. Here he is preening: 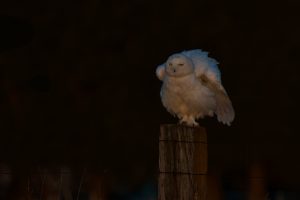 This snowy owl has patiently waited to attack birds feeding on the ground behind me.The sun had just gone down leaving a wonderful colour in the cold sky: 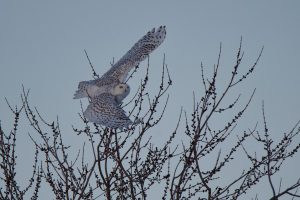