While printing some images last night I got thinking about the many ‘chance encounters’ with wildlife I have had during which I have been thankful I had my camera at the ready.

Indeed, I often keep my Nikon D500 – with a Tamron 150-600mm lens attached – on the passenger seat of my car – just in case I see something of interest. Here are five wicked wildlife encounters I have enjoyed!

Last week I captured this image of a red tailed hawk when my objective was to photograph whatever snowy owls have not begun their migration back to the arctic.

I don’t know about you but I have found red tailed hawks to be awfully reluctant photographic subjects that take flight the moment you lift your camera to eye level. This one was in a field where I normally find snowy owls. I pulled a quick u-turn and lowered the window on the passenger side and began shooting.

I could see the hawk was stabbing at something on the ground, too small for me to see. I got out of my car and snapped three images of it taking off. This is my favourite. 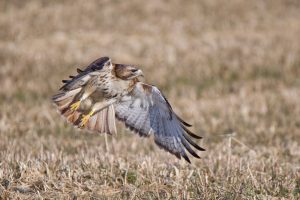 I really enjoy camping in Killarney Provincial Park in Northern Ontario during late autumn. There are fewer people around due to the cool temperatures – it can dip below freezing. It’s even better when you avoid weekends! One day in October 2018 I had just returned to my campsite following an exhilarating hike up to “The Crack”.  I was changing lenses on my D500 when this Algonquin wolf trotted past me, looking at me as if I was the intruder in his territory.  Humans are in fact intruders!

He wandered into the brush behind my campsite but by talking calmly I was able to coax him to stop. He poked his head out into the sun light long enough for me to capture two images then vanished. Ironically, Karen, who works at the Point Grondine Trading Post along the Killarney Road, had told me about a wolf with pups she had seen in the area. It was those wolves I had hoped to see along the road. How lucky that a wolf came to me? 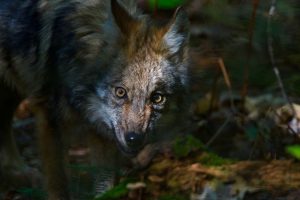 On a camping trip to Killbear Provincial Park, near Parry Sound, Ontario, (October 2017) I saw this Great Blue Heron involved in a tug of war with something. I approached it. Now, this species is more often found along riverbanks fishing so his presence in the forest was a surprise to me. It was trying to catch a garter snake that was desperately trying to coil around a tree root for protection. The heron won as you can see from this image. Who knew heron preyed on snakes? 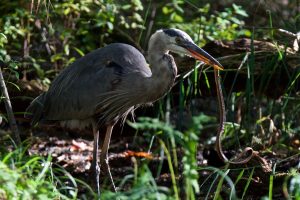 I feel fortunate to live close to the Grand River which has an abundance of wildlife. Often I hike along the Rail Trail south of the village of Glen Morris with my camera. I have come across all sorts of wildlife: blue heron, bald eagles, hawks, foxes, coyotes, wild turkeys and deer. On one November 2019 hike this huge eight point buck emerged from the bush about forty metres from me. He was just as surprised as I was. After graciously posing for a couple of photos he took off across the trail. I have never seen him again. Man, I was pleased to have my camera with me. 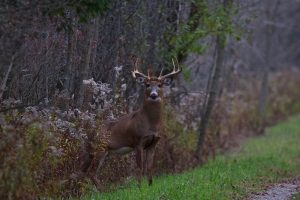 I sometimes drive out to the farmlands outside Cambridge, Ontario just to see what might be in the fields. One day in February 2017 I took such a trip.  I had just been thinking that it had been a few years since I had seen a coyote when, lo and behold, there was one feasting on a dead calf. I stopped my car and stood on the door frame to shoot over the car roof. I have seen coyotes in that field a few times but never eating something. I have yet to find out if the coyotes took down this calf or whether it had been sick. I watched him feed. He occasionally looked up at me but he ate until he was full. Then he trotted off. 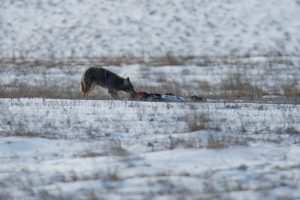 The point of this article is to remind everyone that wildlife is everywhere. If you want to photograph or just observe wildlife  then it’s best to be outside looking. During this challenging period I think it is even more beneficial for the heart and soul to see species that we share our world with. I hope you partake and get as much as I do out of wildlife encounters.