When I head out with a camera it’s normally with a particular subject in mind whether it’s a snowy owl, a bald eagle, a sandhill crane or another species.

Often I come home with very few ‘keepers’ ….. images which please me. Sometimes, though, luck is with me.

Yesterday I took a short hike along the Nith River, about twenty minutes from my home in Cambridge, Ontario. My purpose was two fold, first to have an easy bout of exercise to recover from a couple of hard bike rides and, second, to check in on the bald eagles nesting there.

Two kingfishers have been setting up a nest in a sandbank directly below the bald eagle nest and so I also kept an eye out for them. They seem to be confident of being safe if they are this close to the eagles. Maybe they know the eagles’ presence will keep predators at bay. I could hear their frantic chatter in the nearby trees.

One of the kingfishers perched near a sandbank …..below a bald eagles nest. 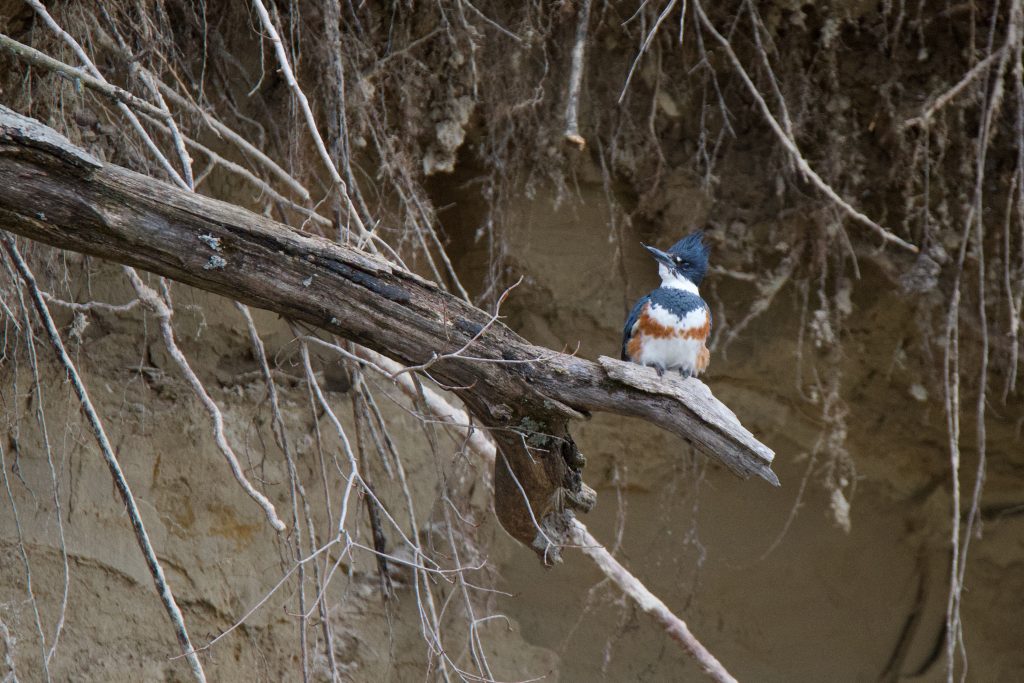 This kingfisher unexpectedly flew past me as I watched for movement near the sandbank I had seen them a couple of days before. 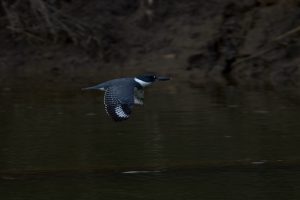 I took a quick look through my lens at the eagle nest and could make out the female’s white head. She has been ‘housebound’ apparently taking care of eggs each time I have visited lately, though I have seen her tearing strips of what appears to be a fish and reaching into the nest as if feeding young. I can’t be sure. Seems a bit early for hatchlings.

The male eagle delivers fish regularly and once in a while will swap positions with his mate. She seems eager to stretch her wings after hours spent performing nesting functions. This time she flew to a nearby tree where she perched, surveying the river in both directions. I quickly walked along the bank in anticipation of her flight. I took a few shots of her perched on the branch just to check my exposure. Everything seemed perfect and it was with confidence that I awaited her departure.

Despite my apparent preparedness I messed up.

The images were less than sharp and so I was angry with myself. A great opportunity missed due to an elementary mistake. At this point I had only a few images of the kingfisher to show for hours spent on the riverbank. I walked along the shore in the direction the eagle had flown and stopped at a point where the river bends. I thought I would wait for her to return and, perhaps, catch her flying through the nearby trees.

For ten minutes or so I was on the lookout for her return when suddenly I spotted her perched on a tree branch right at the bend. She had been there all this time blended in with the tree branches. When I looked at her through my lens there were some twigs obscuring part of her face. So, I moved into a better position which meant standing in the river itself – a good test for my relatively new waterproof Scarpa Kailash hiking boots.

This was a second chance to capture her flying and second chances, in wildlife photography, are relatively rare.

When she decided to fly I was ready and captured a series of images these two being my favourites. Once again, a pleasant afternoon/evening with nature resulted in a wonderful experience which I can look back on with pride. 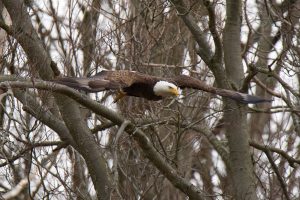 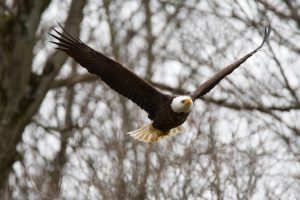 At this time where social distancing is a must these solo hikes and sessions with these eagles are a Godsend. Why not explore your neighbourhood…..you never know what you will see.  Stay well!