Since June I have been spotting a red fox in the woods behind my apartment building. Imagine my delight when this species, which I had been unable to photograph successfully in the past, became a regular visitor. 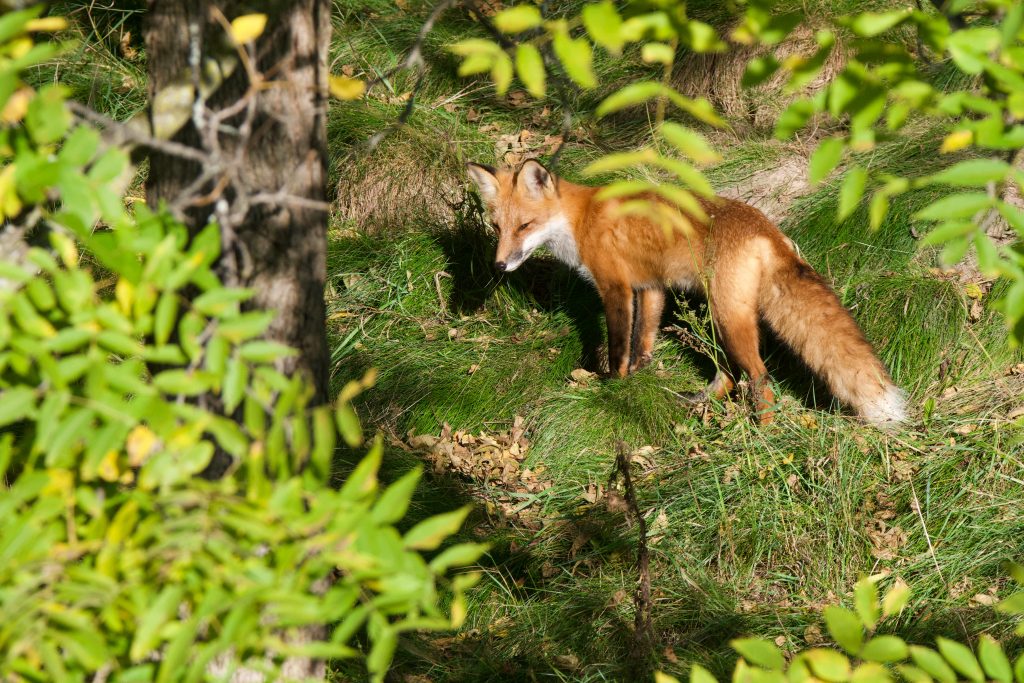 Prior to these encounters I had only see foxes while riding my bike along the Grand River Rail Trail when, of course, I am always ‘sans camera’ and not inclined to stop in any case. I value my workouts. On one of those cycling encounters a red fox crossed the trail less than ten metres from me with a rabbit in its mouth.

Our fox visitor has been most active early in the morning just as the sun is rising. I have watched her darting around the hillside marking her territory by urinating, sniffing out prey and once catching a squirrel that was climbing down a tree unaware of the approaching danger.

Occasionally when the weather was hot this fox would come out of the woods and lay down in the sun for a late afternoon nap. 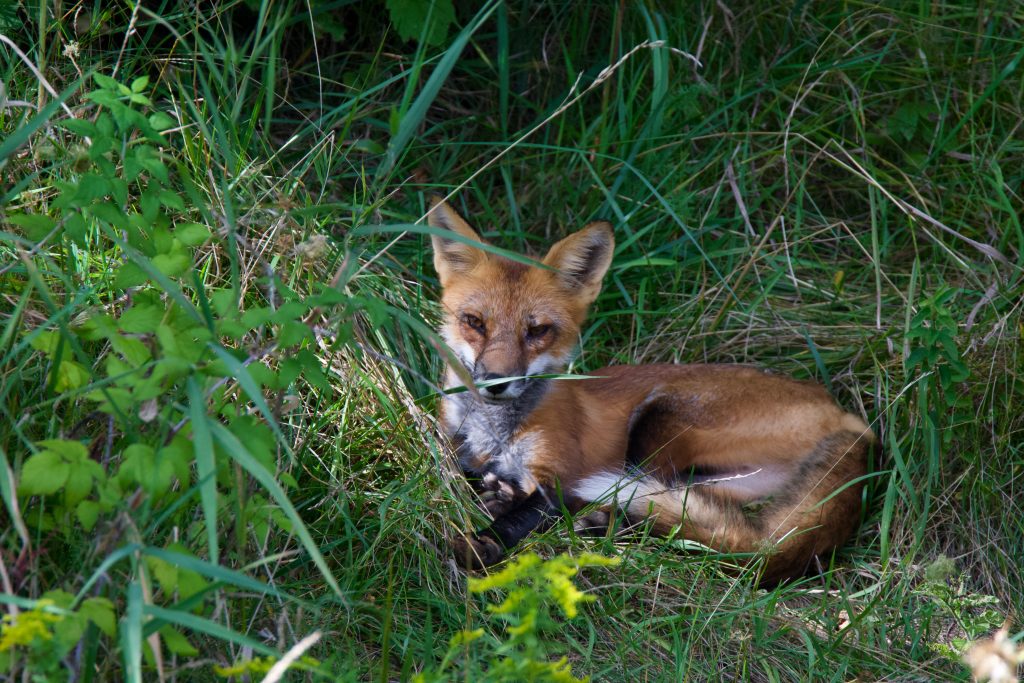 A couple of times I have watched her take shelter when rain made napping uncomfortable. 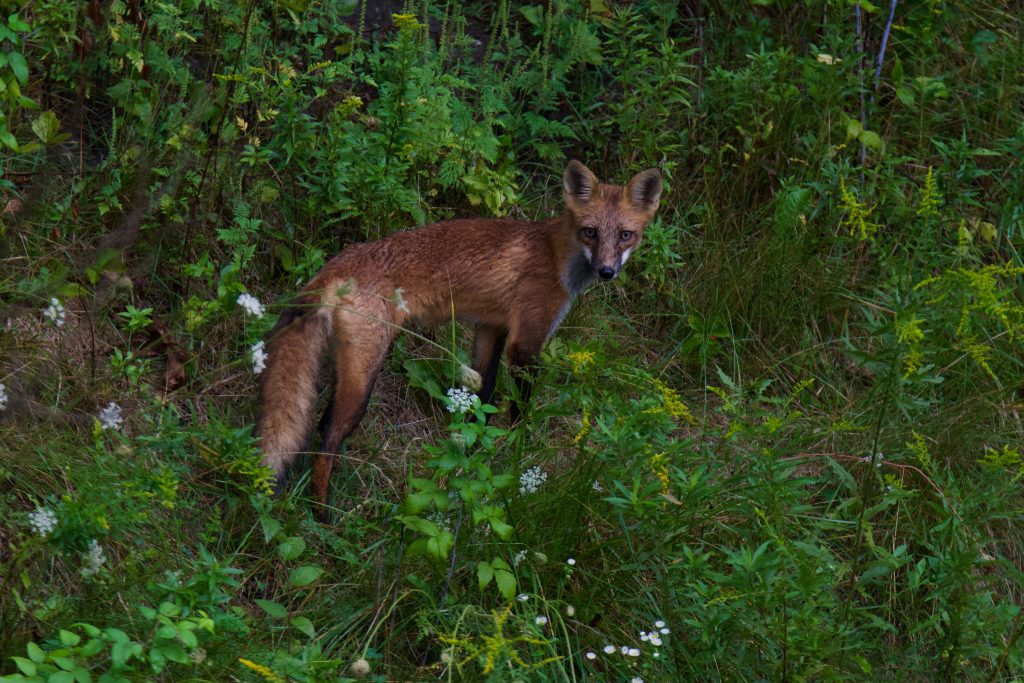 With Covid 19 restrictions I have been spending more time on my balcony and observing her. I had been wondering if she had been breeding and would I see any kits. Then, in mid August, I finally saw her kits playing on the hillside under the watchful eye of the two adults. It was difficult to capture a nice image due to the foliage.

Watching out for the foxes has become my morning ritual. I set my alarm in order to be up and about and take my morning coffee onto the balcony for a couple of hours. Two days ago I skipped the early coffee as I had an appointment across town at 8:30am. After returning to my apartment at 9:30am I brewed a pot of coffee and took my laptop on the balcony. I was not expecting to see the fox this late in the morning. My camera remained on my desk inside.

I had barely sat down when I saw movement from the woods and the adult female came running through the tall grass. I quickly jumped up and grabbed my camera. For almost ten minutes she raced about, retracing her steps as if on the trail of prey or possibly, her kits. She came out into the open several times before finally disappearing on the top of the hill. But the entertainment didn’t end there. 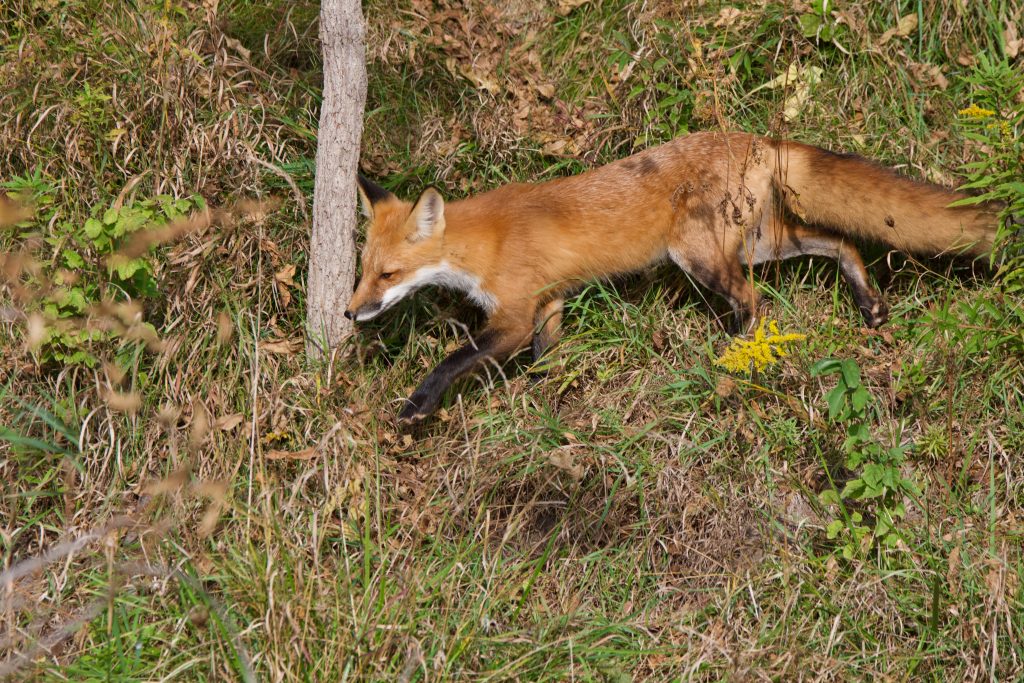 Two fox kits appeared on the hill with the adult female and they raced around in the trees. Then a row broke out and the two kits engaged in a nasty fight baring teeth and biting one another. Earlier in the summer I would have called this ‘play’ but they are probably choosing the hierarchy now and becoming more aggressive. This continued for another ten minutes as they moved further away. 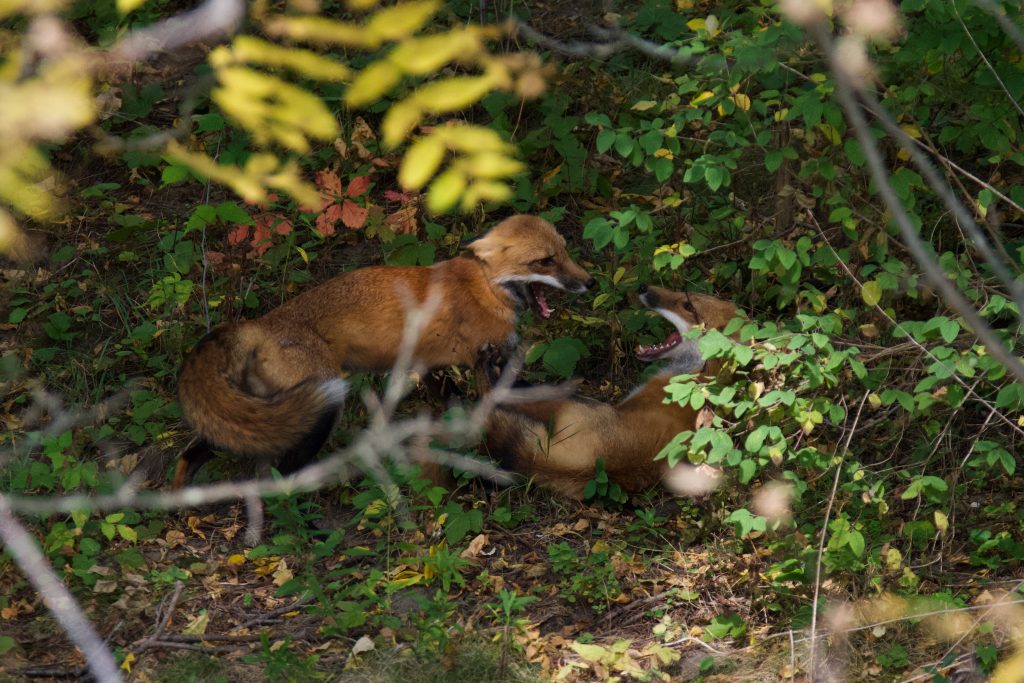 As I write this on Saturday morning leaves are falling from the trees with every wind burst. I have seen foxes a couple of times but only for an instant. The kits will soon be setting out on their own and establishing their respective territories. I wonder if I will continue to see the adults.  I wonder if the absence of cover will be an advantage to my photographic quest or a hindrance. Regardless, these beauties have provided endless hours of enjoyment – right from the comfort of my apartment balcony!