I love hearing from friends who tell me about their various wildlife encounters. It might be while walking around their respective neighbourhoods or driving along roads or simply observing wildlife in their backyards. I hope that my words and pictures might inspire everyone to pay attention to their surroundings.

While I cannot call myself a ‘birder’ I do love the distinctive calls many songbirds make in the woods behind my apartment. Lately I have been trying to identify those sounds as I sit on the balcony.  But it’s being out along the Nith River that provides me the most enjoyment.

Last week I was able to personally verify, for the first time, that the bald eagles nesting there have  three young ones in the nest. Previously I had only seen two. All three sat up high in the nest together the other evening and I snapped a few images of them before they ‘went below’ to rest. 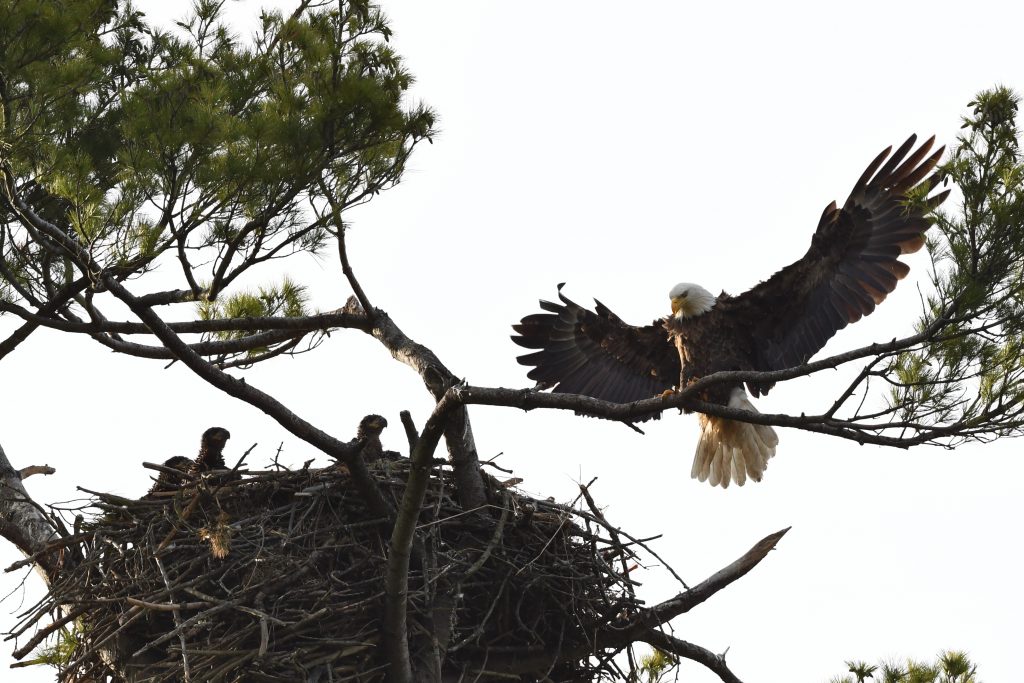 The two adults are kept busy bringing them food – usually fish but sometimes ducks or mink. Speaking of mink (how about that for a segue!) while waiting for ‘eagle action’ there has been much to see along that stretch of the river. A mink has been popping out of its hiding places occasionally. 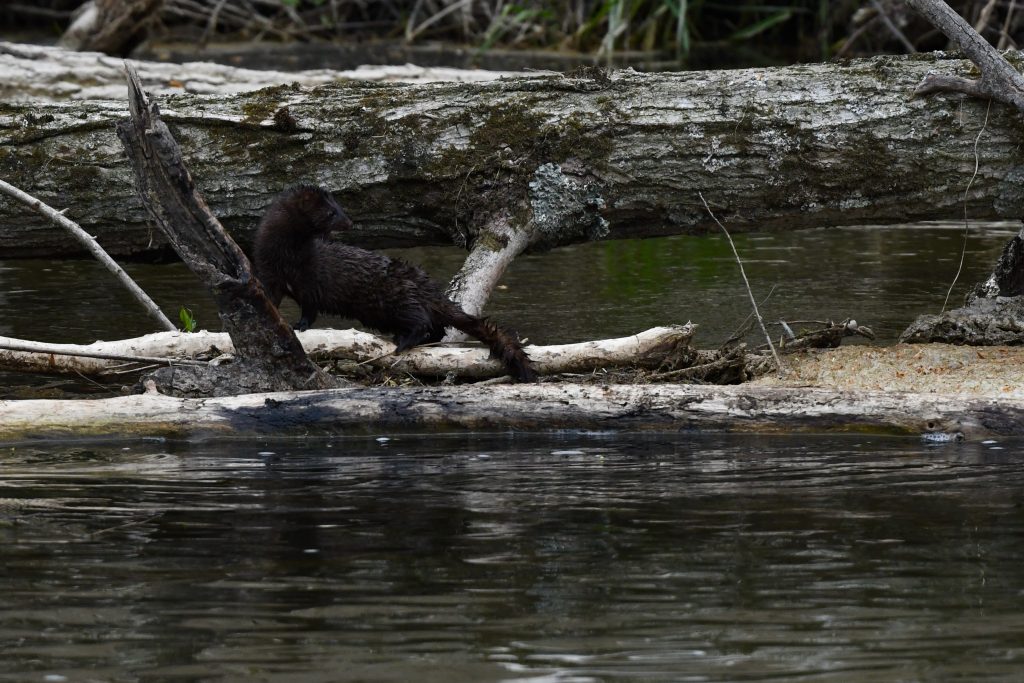 In the early evenings I have been keeping watch for a beaver that likes to swim past my position and then exit the river opposite me. It often sits on its rear end grooming its expansive belly and face all the while watching me. Sometimes it grabs a tree branch or some leaves then returns to the water. 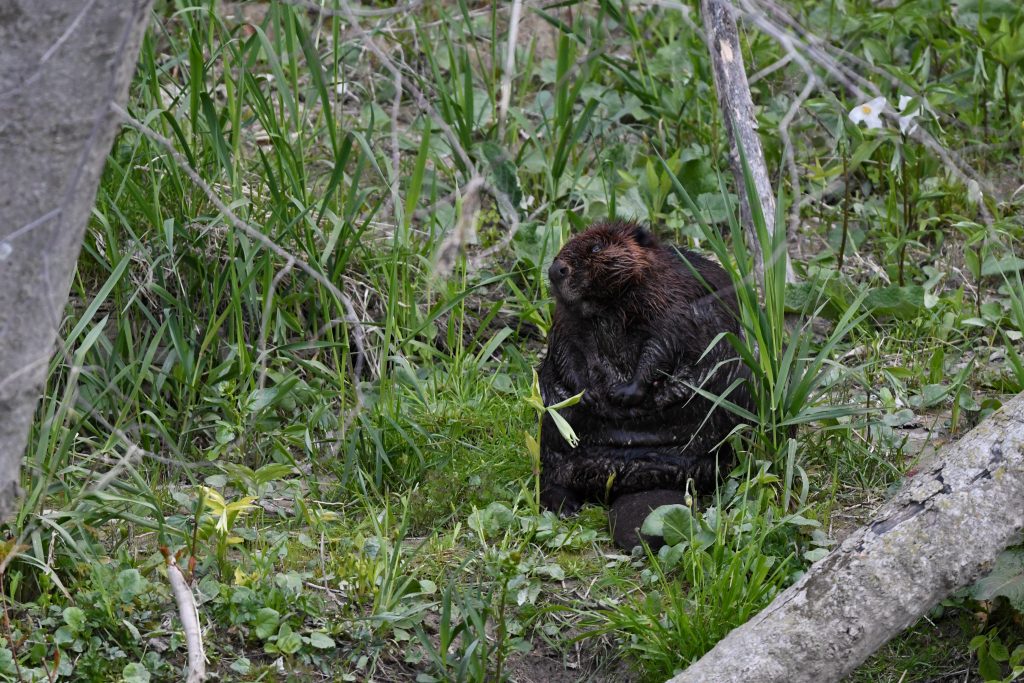 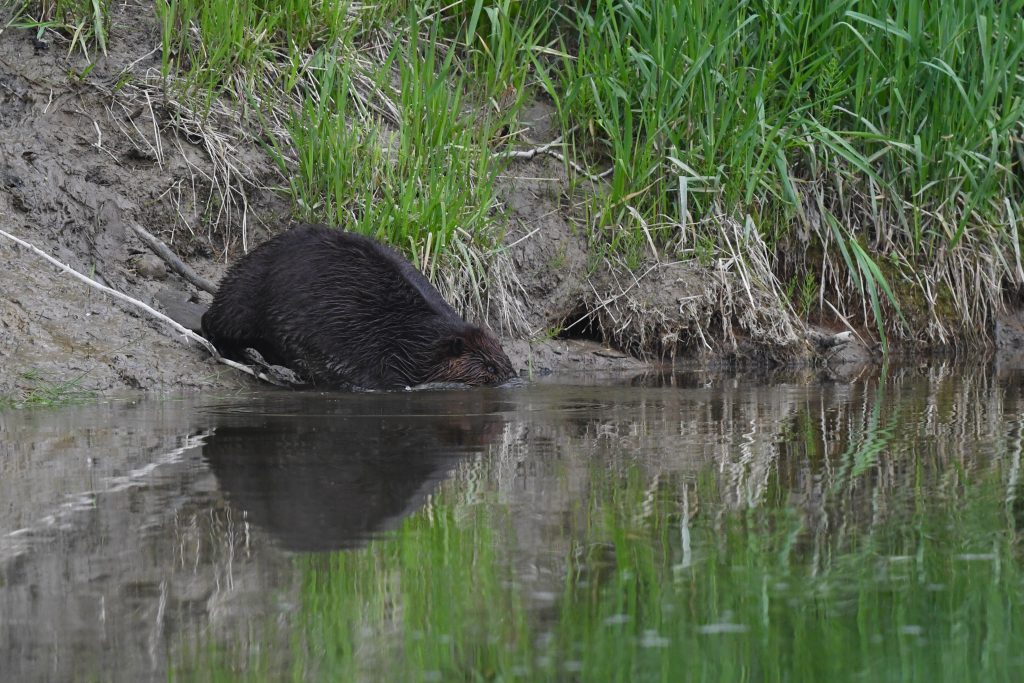 A couple of days ago I watched a kingfisher approach with a fish in its beak. They move quickly but fortunately for photographers they announce their arrival with their screeching sound. I snapped some images which please me. Here is one: 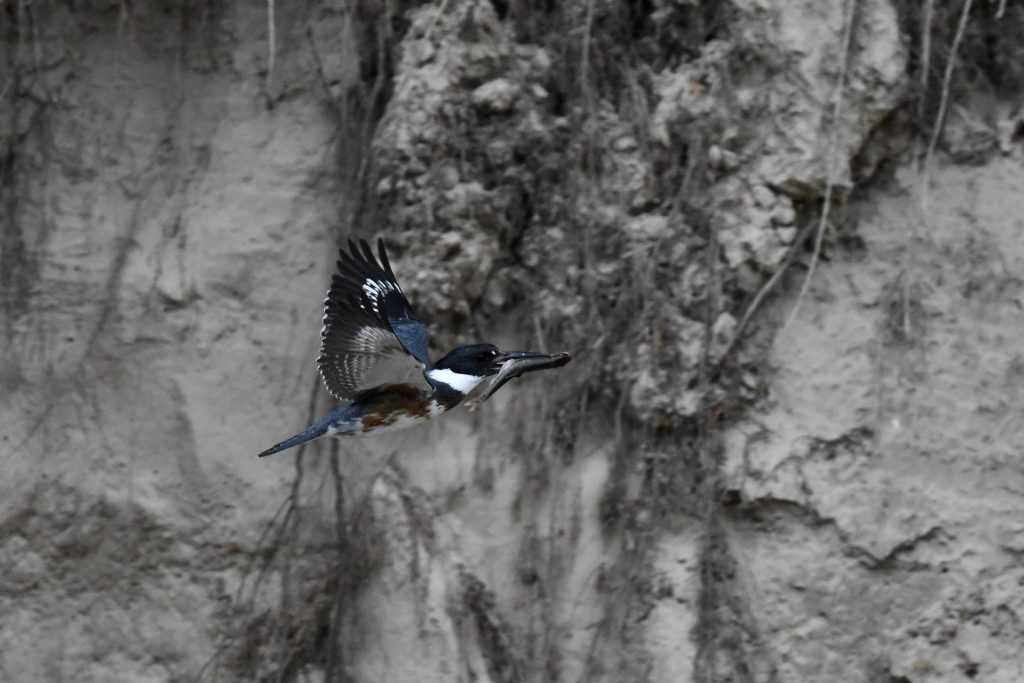 It is not uncommon to see deer run up the wooded hills on the other side of the river. One night last week I was surprised to see about a dozen of them sprint, single file, through the brush.  They followed a trail  beneath the eagles’ nest. About two minutes later another large group appeared and also seemed in a rush. 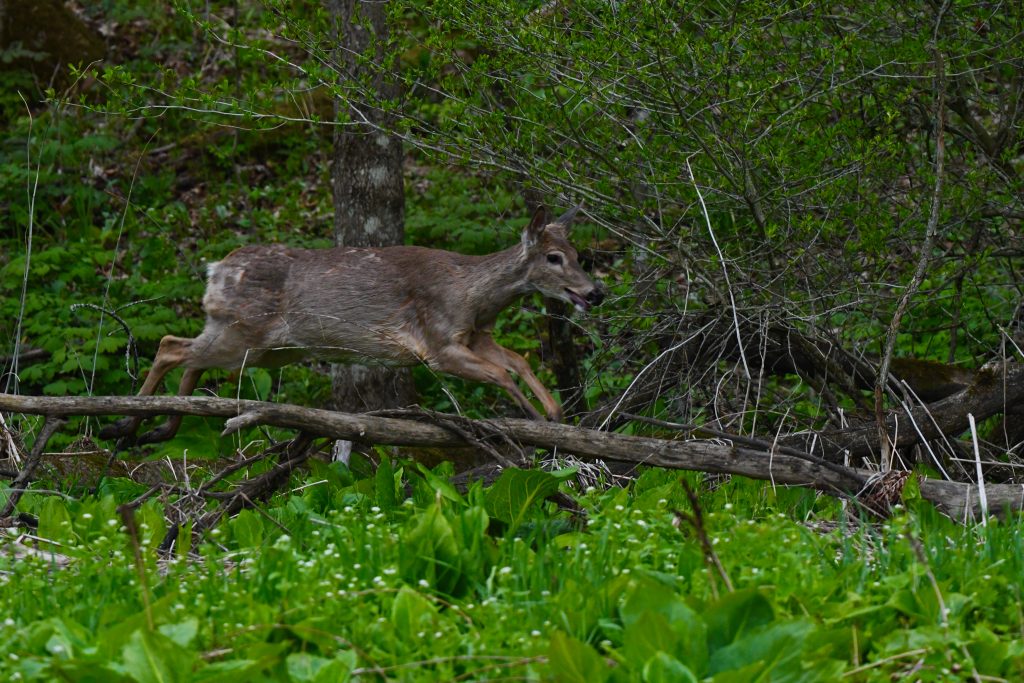 I have also seen and heard Baltimore Orioles in the woods near the river. As I mentioned earlier, I am by no means a birder, so when I snapped this image of an olive coloured bird the size of a small robin, I had to ask Bill Wilson – who IS a local ‘birder’ and conservationist – for help. I have always assumed orioles are orange. He confirmed this is actually a female oriole. I would never have known. 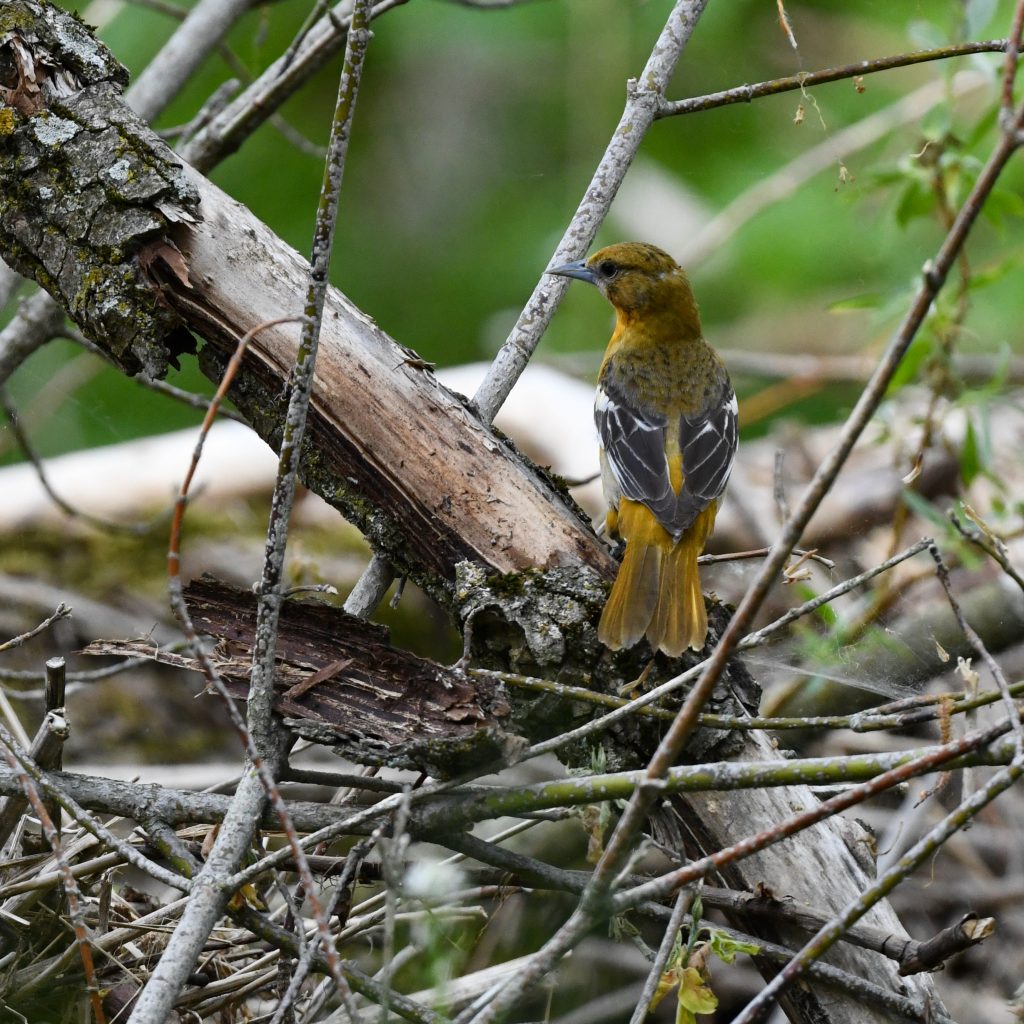 While I enjoy the eagles most there are so many species which are fascinating to watch. With the spring weather there really is no excuse not to be outdoors and experience what nature has to offer. You never know what you might discover.  Stay well and do spend some time outdoors. 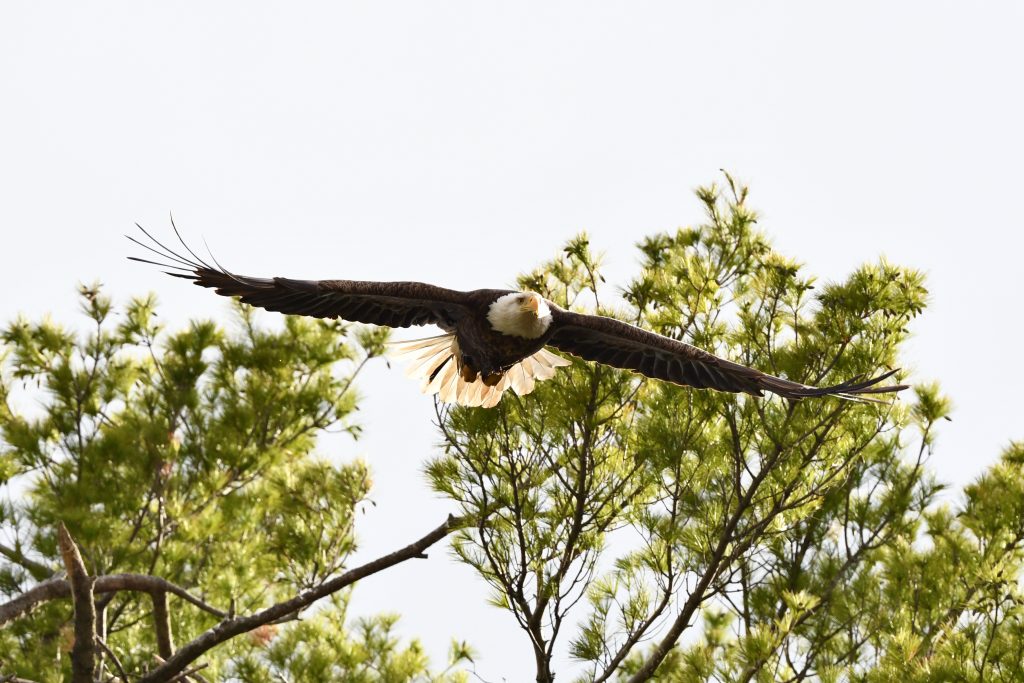