Thanks to all those who attended my Waterloo Region Wildlife Photography Zoom presentation this past Tuesday. It was my pleasure to share with you all.

Emotions overcame me when I spoke about the fate of ‘Harry’ the sandhill crane for obvious reasons. To those who were unable to join us I will explain………..

A couple of weeks ago I was out cycling along the Grand River rail trail a 35k- 40km ride I do on alternate days. This magnificent trail passes through woodlands where I often encounter deer, pileated woodpeckers and the odd coyote or fox. Until that day I had never seen a sandhill crane along that trail. They prefer wide open spaces and marshlands. 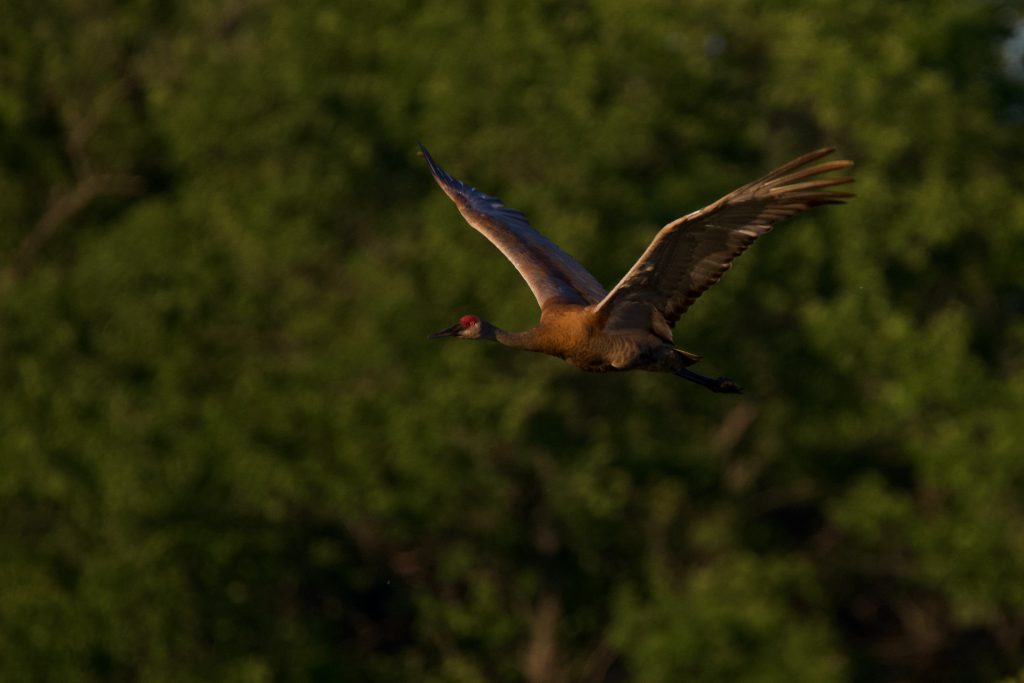 Yet there was this adult crane calling out from the brush. I immediately braked. A couple of dog walkers approached and we assessed the situation. The crane was attempting to fly but its right leg appeared broken.

The injured sandhill crane dubbed ‘Harry’ in the brush along the Grand River. paulgainsphoto.com 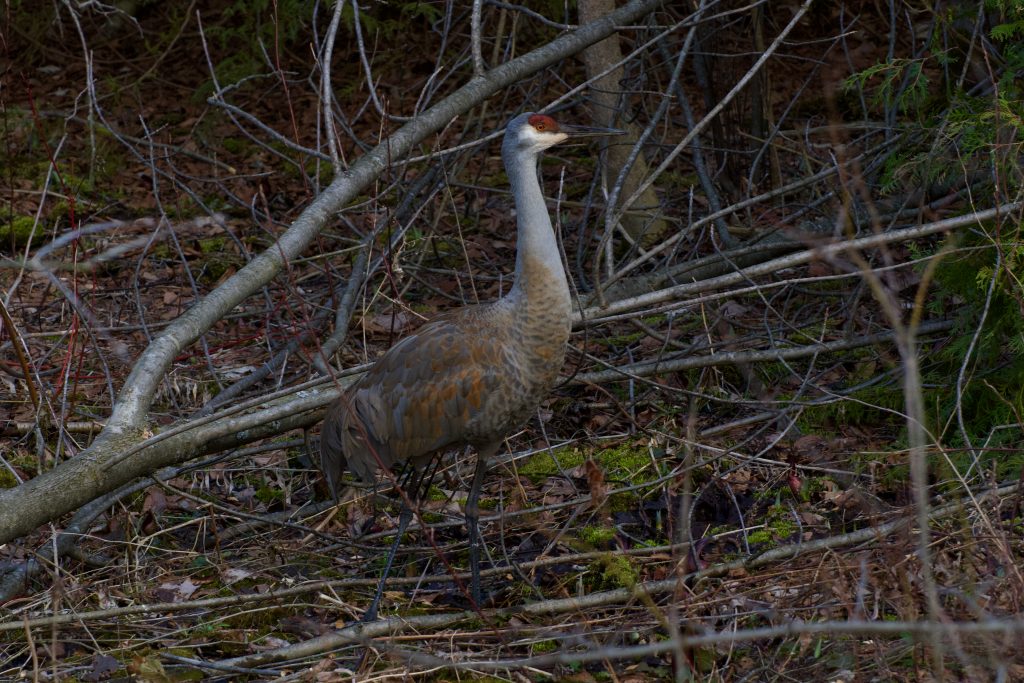 They were quick on the mark whipping out a cell phone and called a couple of wildlife sanctuaries and the local animal control. It was clear from their conversations that the authorities were not reacting as swiftly as we three panicked onlookers would like.

I continued cycling to my turnaround point, which offers a view of the Grand River, where I stop for a minute or two to look for blue heron and juvenile bald eagles that occasionally fish here. Then I decided to make some calls of my own.

I called the SPCA for that area and was told “Oh I know exactly where you are, that’s not our jurisdiction. Call this number.” In frustration I  asked the lady “Why am I doing the running around?”

Then I googled wildlife rescue again and spotted Wildlife Haven in Waterloo, Ontario. I called there and spoke with Joy Huggins, the owner – a  licensed wildlife rehabilitator. She said she would try to find volunteers to come down and transport the crane back to her place.

I rode home stopping only to speak with the couple I had met. They were now leaving the area. They had been told by one animal control person that the appropriate rescuers would be notified – although they weren’t clear who that was. They had been waiting for help for almost an hour already!

After I got home and showered, I grabbed my camera and quickly returned to where I had first seen the crane. Somebody had placed a ribbon on a stick marking the crane’s location. Another concerned citizen trying to help. The crane was now standing in the same place. I sat down on the trail taking a few pictures thinking that because I hadn’t heard from anybody that this poor bird was going to suffer the indignity of being victimized by the local coyote population. Then Joy texted me.

“I have a volunteer, Rob, who is game to try (rescue). It’s really a two person job.”

The realization that I was now going to be part of the rescue of a 4 foot tall bird with a very sharp 6 inch beak increased my pulse rate. But if I am really serious about wildlife conservation – as I profess – then here was my chance to prove it to myself.

I raced home to get some gloves. I have seen adult cranes attack one another with those beaks. They can be pretty dangerous. When I got back 20 minutes later Rob was just arriving at our designated meeting place – a parking area on the shoulder of the road. A neighbour had given us permission. Rob took a large crate out of his SUV with a smile. He looked confident.

“Have you done this before, Rob?” I asked.

“Never. I usually clean the crates at Wildlife Haven when I volunteer,” he replied.

We started walking down the path carrying a couple of blankets and the crate and I made a quick call to Joy.

“Hey Joy, neither of us has done this before. Any tips?”

“Watch out for the beak!” Was her initial advice. She pointed out that there are no courses for rescues; it’s instinct.

” If we live to tell the tale this will be a good story,” I said, only half joking.

When the crane saw us approaching it tried to run away but the brush was too thick and it was in distress. Rob dropped the crate and we approached from the sides. He held up a blanket as the crane tried to stab him. I grabbed the beak. We tossed the blankets over it and, as Rob went for the crate, I held the crane’s body still with my free hand. Within another minute we had put the crane into the crate and locked it in.

‘Harry’ after being caught and en route to Wildlife Haven in Waterloo. paulgainsphoto.com 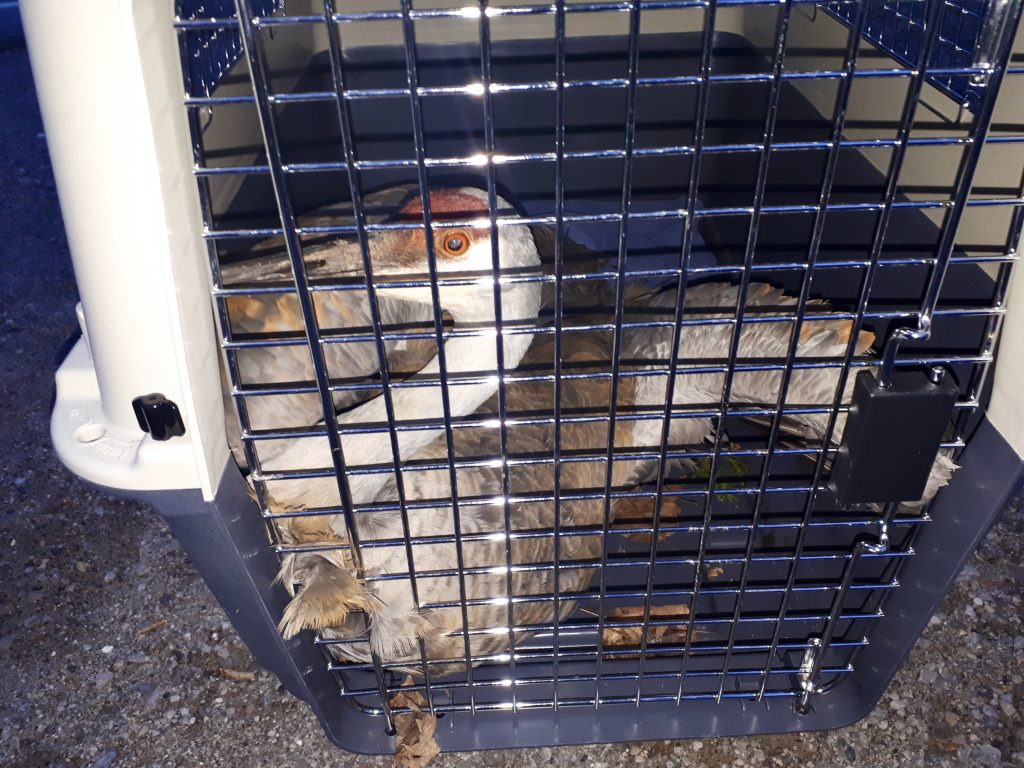 Then, as it continued to try and stab us, we carried the crate back up the hill to Rob’s car. He drove it back to Wildlife Haven immediately. I drove home feeling very proud of myself. Heck, I was elated to have been part of a rescue.

I paid the crane a visit the next day and Joy asked me what I wanted to call the bird. I said ‘Harry. If it’s a female that can be short for Harriet and if it’s male …Harold.” She had confirmed an appointment with a veterinarian for Saturday two days later. Not all veterinarians will deal with wildlife, she told me.

Harry at the Wildlife Haven the day after being rescued. paulgainsphoto.com 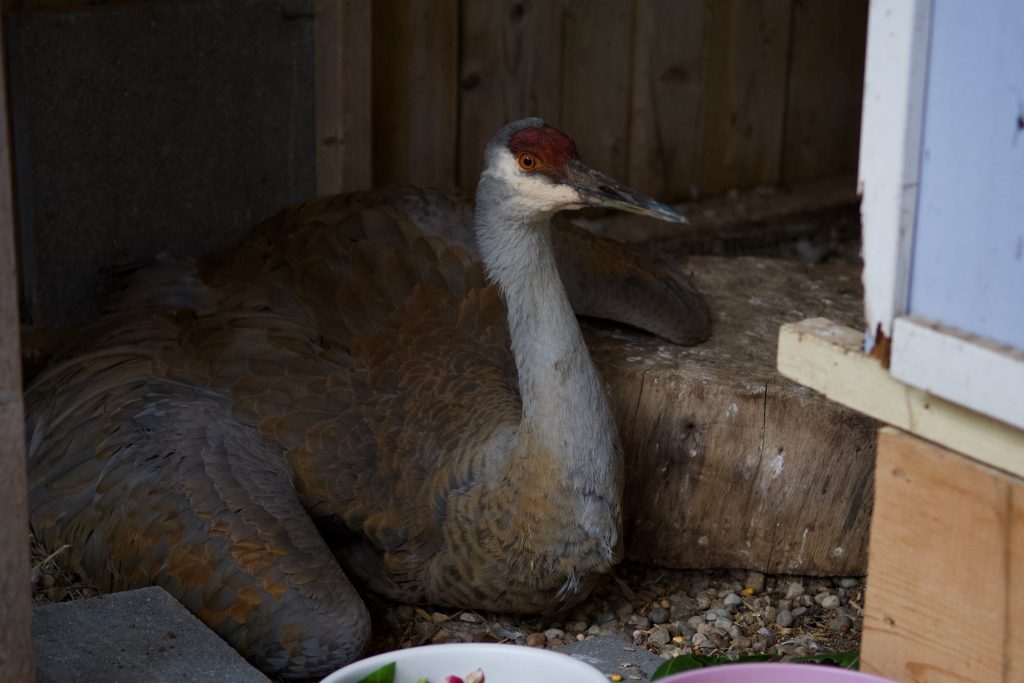 I checked back on Saturday and Joy texted to say she had made the decision to have Harry transported to another wildlife rehabilitation centre ‘Shades of Hope Wildlife Refuge’ in Pefferlaw, Ontario about two hours away. Harry had not eaten or drunk any water while at Wildlife Haven and Joy was concerned. Shades of Hope is a much bigger facility. They have staff and two veterinarians on call.

On Sunday night I sent an email to Gail, the owner of Shades of Hope asking about Harry’s condition. She responded monday morning with the devastating news that, after administration of pain medication, the X-rays of Harry’s leg revealed a shattered femur.

“There was no opportunity to surgically pin the bones as there were too many pieces,” Gail wrote. “ I’m sorry we could not save the bird. We had to let him go and he is now no longer suffering.’

My eyes are filled with tears again as I write this blog. I know that when I give wildlife presentations and talk about being face to face with a pumas, jaguars, wolves and bears I might appear blasé about the experience. As a wildlife photographer/journalist I love my subjects. To come this close to a helpless creature and have such an outcome just breaks my heart.

Joy has told me that compassion fatigue is a real thing with her after all the years she has been rehabilitating wildlife.

I have cycled past that spot where we first saw Harry many times since that day and can only guess that the high winds that day had somehow impeded his flight and sent him/her into the trees. There is a clear area with a marsh about 25 metres further along. Maybe Harry was aiming for that spot and was sent off course.

I am still upset by the outcome. But as other photographers and wildlife enthusiasts have told me – we have to try!

Wildlife Haven exists on donations and Joy would love to compile a list of volunteers willing to participate in rescues. If I can do this anybody can! Please visit Wildlife Haven and make a donation or contact Joy to volunteer.