It has been a couple of months since my last blog mainly because my physical activity has been restricted by some ailments not least of which is a painful case of sciatica. Thankfully I have a brilliant physiotherapist and her exercise prescription is helping immensely.

The Toronto Star ran my feature on snowy owls November 13th along with two of my images of owls in-flight. In the article I made a pitch for the snowy owl to be named Canada’s national bird. It’s no secret that snowy owls are my favourite species.

A week ago I took my first snowy owl ‘recon’ drive this winter and, through my binoculars, spotted three owls in the fields I have been visiting the past nine years.

A beautiful all white adult male was sitting on top of a grain silo while two young female owls were perched on the same fence about a hundred metres apart. My intention setting out was merely to see if there were owls in the area and, if I got a photograph or two, then that would be a bonus. The winter is long and there will be lots of opportunities for picture taking.

One of the causes of sciatica, apparently, is standing around in the same position for hours on end – which is often necessary for wildlife photography – so I was hesitant to get out of my car. I continued  driving around looking for other owls. No luck with that.

I returned to the field with the two owls and parked my car at the side of the road. ‘What the heck!’ I thought. Grabbing my gloves and camera I got out and walked through the muddy field towards the nearest owl.

I was soon cognizant of the fact I was standing in a field that had recently been fertilized. Oh the joys of wildlife photography!

My first encounter with a snowy owl this winter. This 2 or 3 year old female is preening her feathers as the sun goes down. 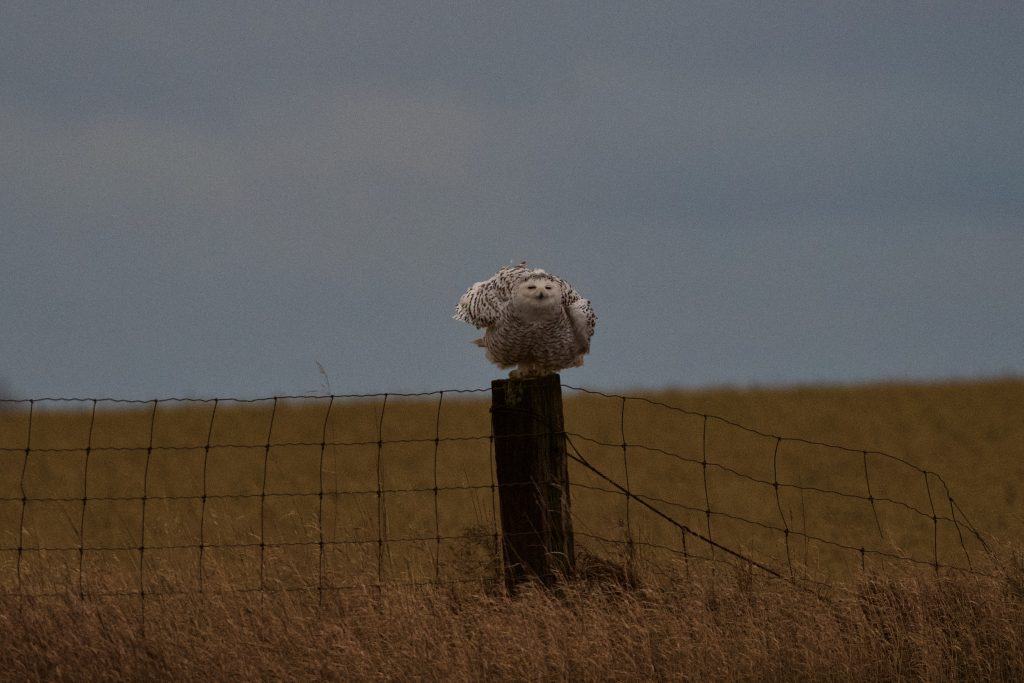 The sun was down when she finally flew across the field past me and into a tree along the main road. The images are not among my best but I know that this owl will have studied me and, if I am careful, she will recognize me and be more comfortable with me as I make further visits. Judging by the moulting on her flight feathers she is likely two or three years old.

Having chosen a place from which to hunt she takes off and flies to a nearby road. 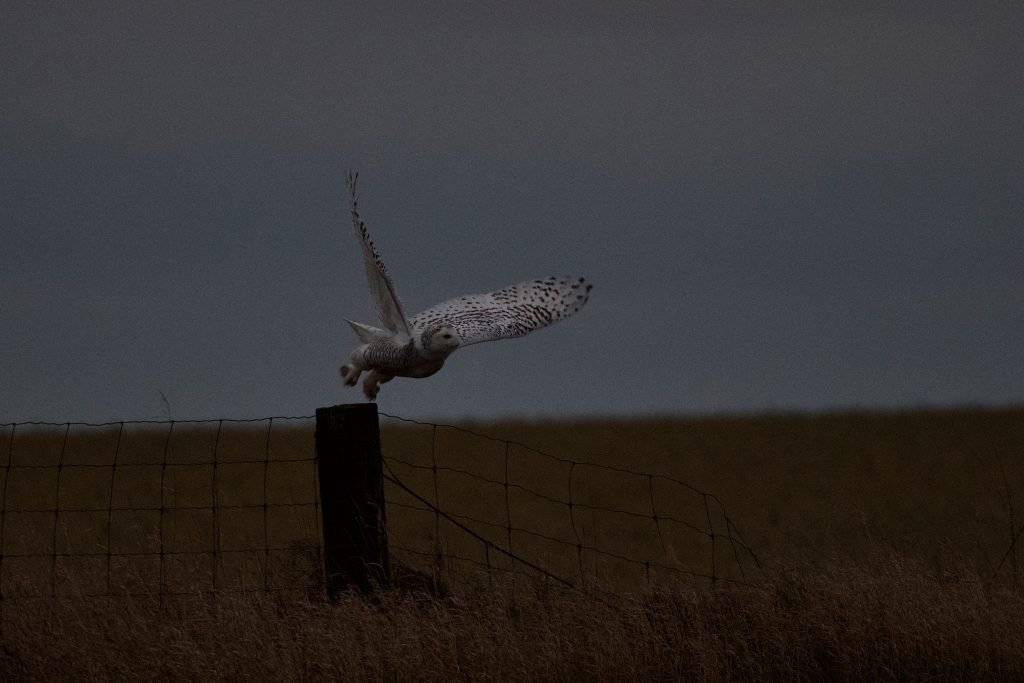 On a subsequent visit two days later I couldn’t find a single owl. This concerned me. The International Union for the Conservation of Nature (IUCN) has given the snowy owl a ‘vulnerable’ assessment and warns their numbers are decreasing.  More recently, The Owl Research Institute in Montana reported fewer successful breeding nests in Utquiagvik, Alaska this past summer. They have monitored this area (formerly Barrow) for 30 years.

This downward trend in snowy owls numbers may well be continuing. So, I left the area a little disappointed. On my next visit a few days later I could find just one owl.

The weather has been topsy turvy and with the snow melting again I wasn’t surprised to see that dozens of gulls were enjoying these same fields on my excursion yesterday.

The sun was lower in the sky but still very bright when I re-visited her which can present challenges in getting the correct exposure. I got out of my car and sat down on the side of the road to get more of an eye level view. For the next twenty minutes she kept looking around at the two other owls and also to a point over my shoulder. Perhaps she could see another owl or maybe she was eyeing the fields which seem to be favoured by the more mature owls each winter.

This female snowy owl was roosting on the ground most of the late afternoon. 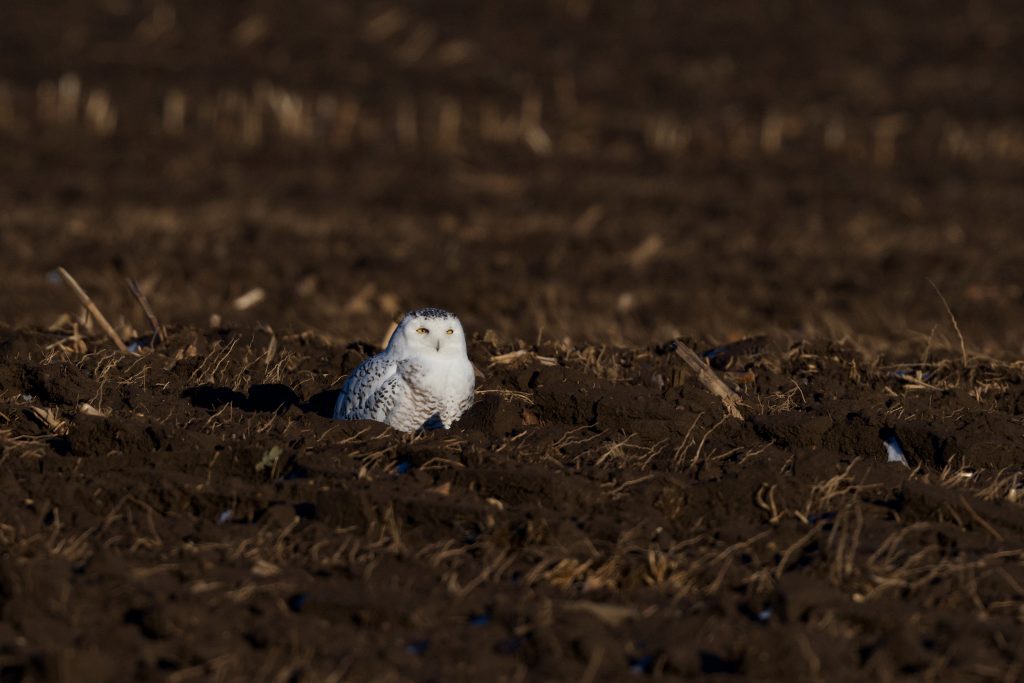 Then she stood up and I knew she was about to take off. Both the wind and the sun were at my back and I hoped she was going to fly past me. With a look behind her and to the sides she lifted off quietly making her way across the muddy field. She landed on a utility pole about 40 metres further up the road. 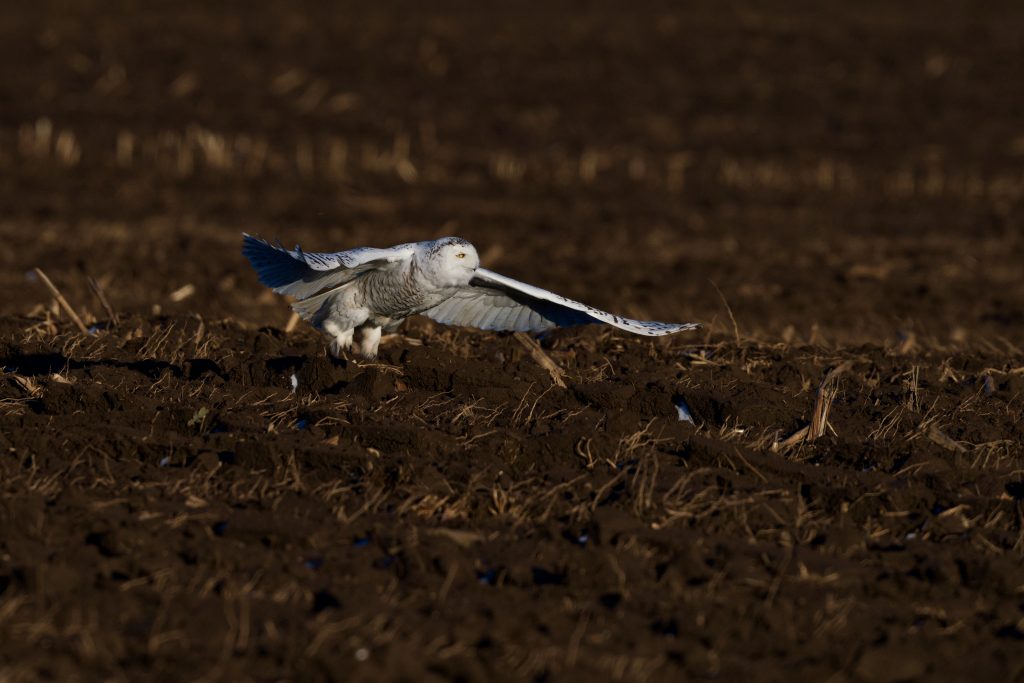 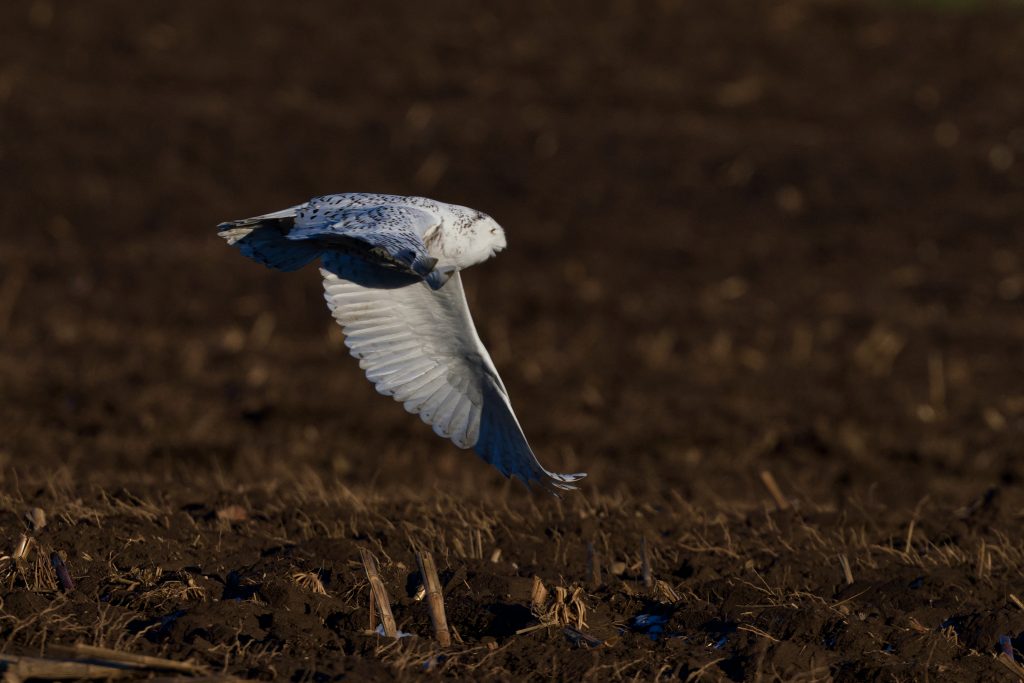 For half an hour she remained in place. I had wandered into the field in front of her standing 35 metres away in order to allow her wide open flight paths on either side. She seemed to be eyeing a grain silo over my left shoulder and a row of utility poles over my right. Now it was a waiting game. I hoped she would fly past me with enough light to get a decent image.

Then a pickup truck pulled up and stopped. The driver lowered his window and began taking pictures of the owl. He drove closer until he was just about under her. A second car appeared and drove up behind the first. That driver got out with a camera and starting taking pictures before the cold wind seemed to deter him and he climbed back in. The cars were blocking the owl’s flight path.

How did I determine her flight path? I could see two snowy owls in the fields behind her and, over the years, have learned that owls will avoid a confrontation if possible.  And owls like to take off into the wind.  It was more likely she would come past me – if she had a clear path.

Eventually the second driver left but his car was replaced by a third vehicle which drove past then stopped and reversed. A fellow got out and walked up to the owl with his cell phone. All the while I was standing in the field waiting for her to fly to her preferred hunting spot which I would have bet money on would be the fields behind me.

As the sun had descended I lamented the fact that I would not get the shot I had hoped for as there was just not enough light for a good image. The two cars left and I slowly walked back to the road stopping every now and then to look at the owl through my camera lens.

She watched me get inside my car. Then, as I expected, she flew right past the point I had been standing for an hour and landed on a utility pole along an unmaintained dirt road.

I smiled. I had been correct in my thinking and I also know where she may be found on future visits.  Furthermore, I am certain she will recognize me and might tolerate my presence enough to hunt in front of me as others have done each winter. As I said it’s a long winter and there is no need to rush. Close encounters lie ahead and the images will come!