When did the enjoyment of wildlife photography become so competitive? Why are photographers so impatient that they will display abhorrent behaviour towards wildlife and to each other?

A couple of weeks ago, while waiting for a female snowy owl to leave her perch in a tree, I had an encounter with a photographer who had seen my car parked on the shoulder of a side road and me standing about thirty-five metres from this female owl.

I had been there perhaps 45 minutes and had seen this owl hunt from this perch on previous occasions and so had placed myself there in the hope of catching her doing so again.

This  female owl hunted in an adjacent field the day before. She had swooped down and caught a mouse here: 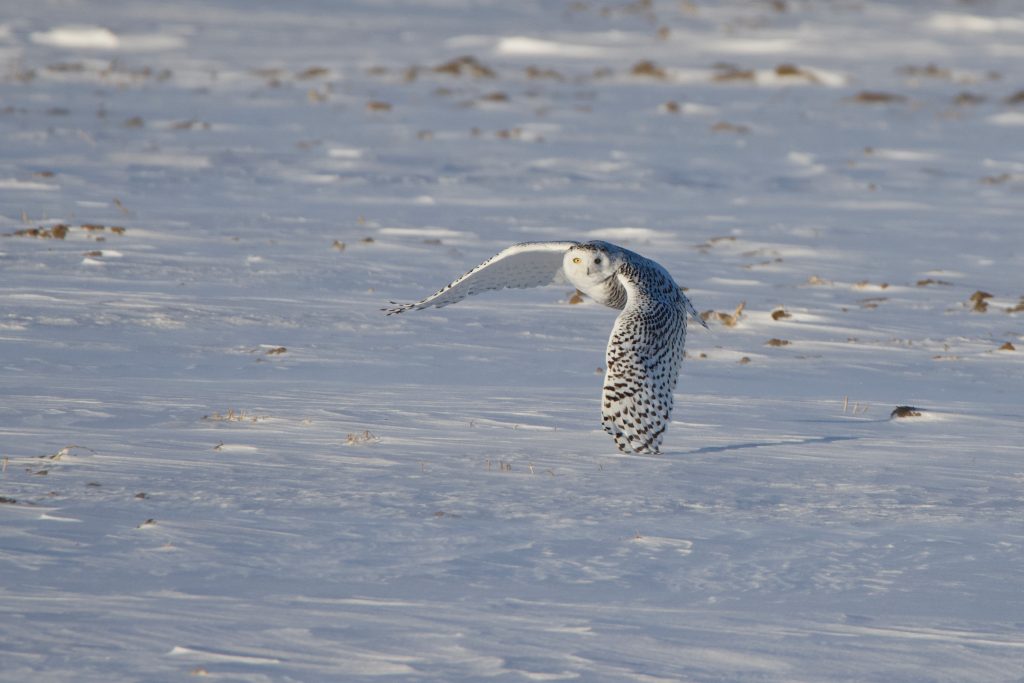 This photographer parked behind me and I heard her footsteps approaching.  I turned and said hello. She asked me how long I had been there and how many owls had I seen that day. Then she walked past me to get nearer to the owl.

“Please don’t stand in front of me,” I quickly said. “If this owl takes off into the wind she will go either left or right and you will be in my shot.” I thought I had been polite but evidently I struck a nerve. Her response was to hold up her camo covered camera and expensive lens and say “Look! I have been doing this a long time and I am not going to take pictures with twigs in front of her face.”

Once the owl took off the twigs would not be in her face but that was besides the point. I said, “Well you could be courteous.”

After about ten minutes she announced “It’s cold. I have got to go.” It sure was cold, about -17C with wind chill, but enduring the cold is necessary if you want to get snowy owl images. You dress appropriately for the environment.

The sun was sinking below the horizon and the sky was a deep blue as I remained in place. Finally this owl, possibly a mature three year old, left her perch and hovered above the field before catching a mouse. These are a couple of the many images with which I was rewarded. 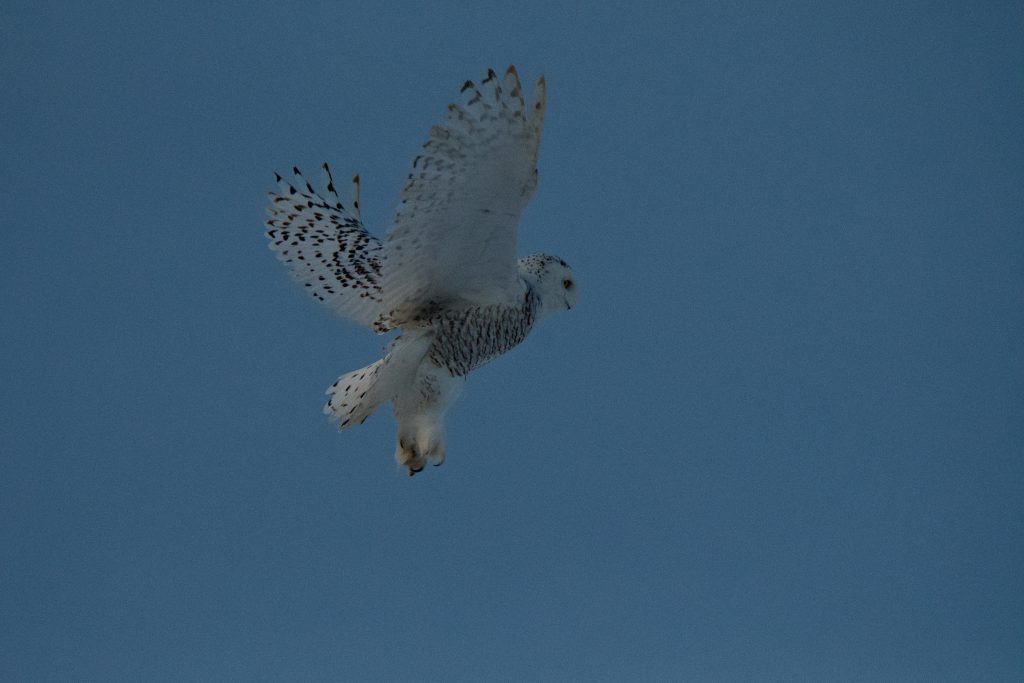 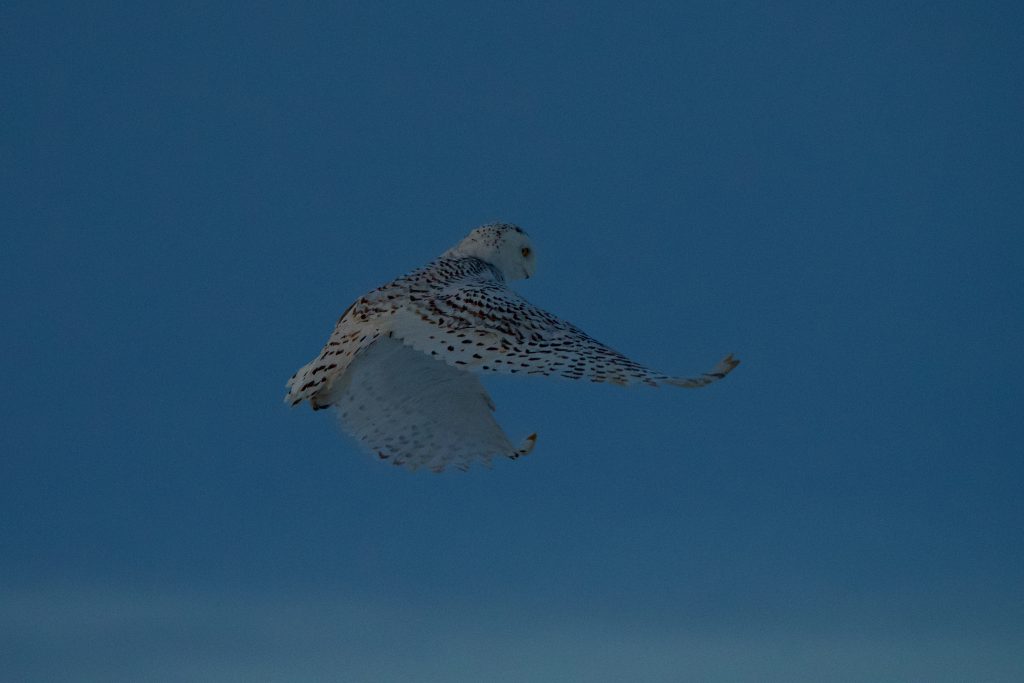 My positive experiences with photographers far outnumber the negative ones. Most people are content to share their enjoyment of seeing these magnificent birds in action. The interaction is usually pleasant and welcome, especially during Covid restricted times.

Occasionally, I meet photographers who have very little experience with snowy owls and are keen to pick my brain. That’s fine. I have been going to the same fields for about eight years now and try to learn the habits of individual owls.  I love to share experiences and maybe learn something at the same time. Some of these photographers ask if they can follow me around which I don’t mind.

I do get a bit possessive, however, when I have been standing in a farmer’s field for a couple of hours – always with permission from the owner – waiting for an owl to hunt only to see the owl become distracted by the approach of another photographer. If  they have been granted permission that’s one thing but when they try to strike up a conversation as I am imagining the owl is about to hunt is another.

This is my favourite female owl with her ‘catch of the day’ a large meadow vole: 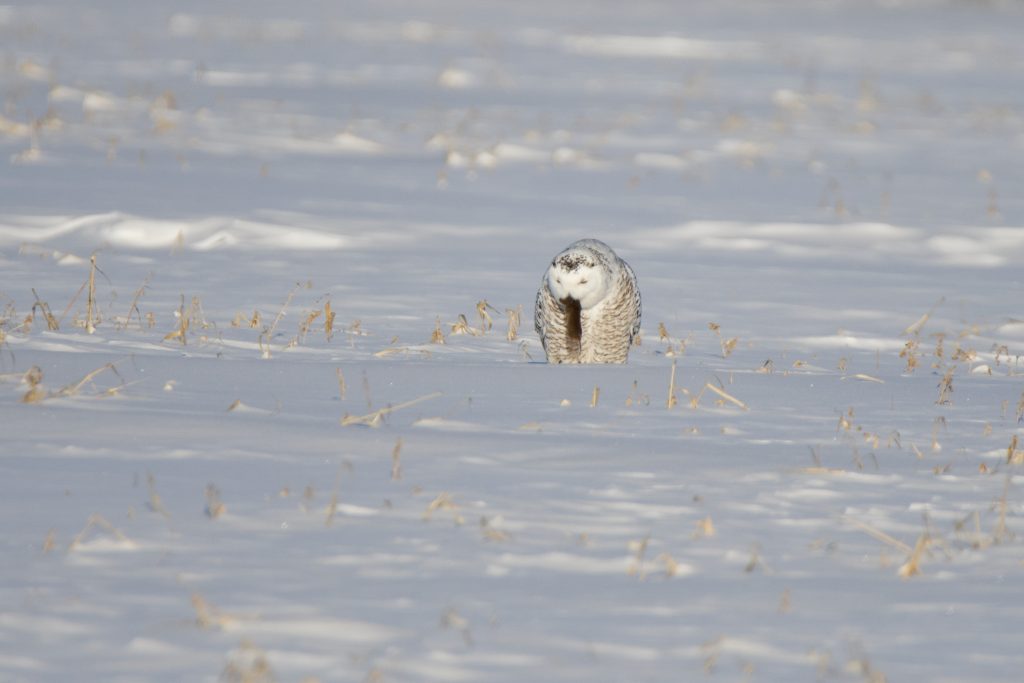 She swallowed the vole in a series of gulps then, as I hoped, she flew back to her usual perch: 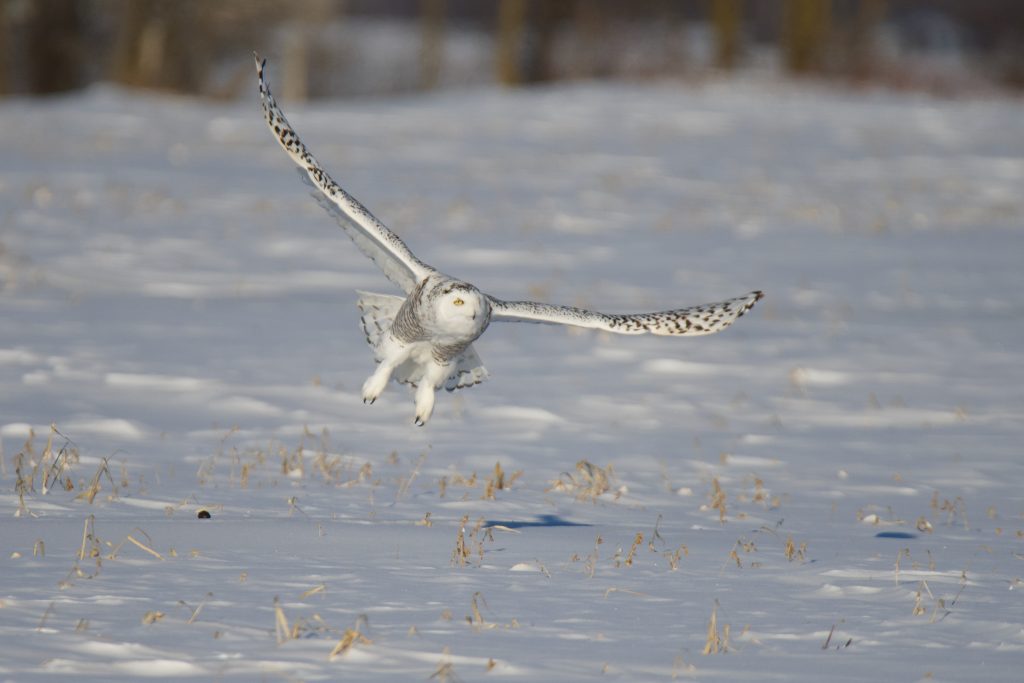 If I see someone in a field near an owl I might try to identify the owl with my binoculars and make a mental note of its movements.  But I won’t go into the field and risk spooking the owl and spoiling another photographer’s chance at a shoot.

Last winter I remember watching a female owl on a utility pole for some time. She liked to hunt in the field below her so I was giving her space and exercising patience. I stood on the road. Within ten minutes other photographers, who had either seen my car or the owl herself, stopped. Five cars were parked along the narrow road.

A farmer I am friendly with, and who owns a couple of large fields in the area, stopped his truck and called out to me angrily,  “How is that owl going to hunt with all these people here?”

A couple of photographers got out and literally walked underneath the owl. Thankfully the cold was again a deterrent and soon the owl had only me for company. She did fly down and catch a rodent but by that time it was dark.

I shared this discussion with a biologist friend, whose research assistant had a similar encounter to the one I outlined above. Only, in this case, the researcher asked a photographer who was baiting owls – something most of us consider unethical – if he could do it another field because they were in the midst of completing their survey. The photographer refused and a heated argument ensued.

The first rule of wildlife photography should be consideration for the wellbeing of the bird or animal. But all too often people display impatience and want a photograph at all costs. The result is that they frighten the bird and are disappointed with their images.

I have seen photographers drive off in desperate search of owls because the one we have been watching appears inactive. They aren’t thinking that it will hunt or exhibit other interesting behaviour when the occasion is right. The great National Geographic photographer, Steve Winter, told me in the Brazilian Pantanal that “when you find a jaguar, you stick with that jaguar!” It’s a useful dictum and applies to all species – especially owls.

There are days when I don’t get a single image despite spending three hours or more out there with my camera. And, there are days when I am down to the last thirty minutes of decent light and thinking of leaving when I am rewarded with an opportunity. Like this night where the sun made a surprise appearance for a couple of minutes before dipping below the horizon. My favourite female owl decided she was hungry and flew past me to catch a mouse.  She returned to a tree right in front of me after a couple of minutes. 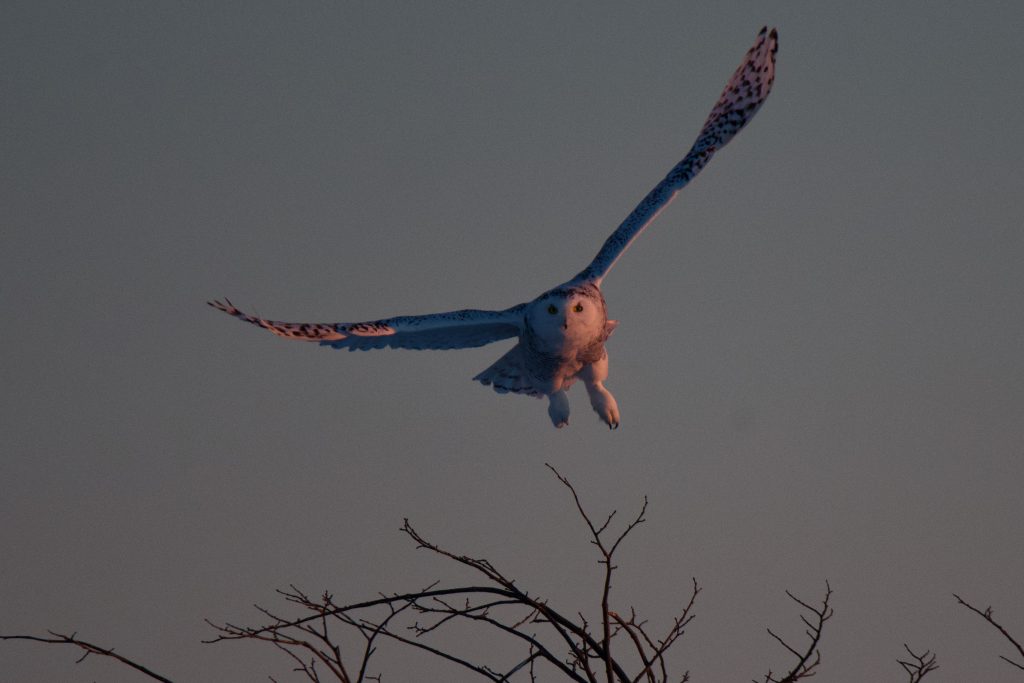 The welfare of the owl is always foremost. Exhibiting a bit of patience can often lead to an image of which to be proud. I hope we can all enjoy nature and be supportive of one another at the same time as wildlife photography requires a combination of knowledge and patience.