Scott Weidensaul, co-founder of Project Snowstorm (a world renowned snowy owl research organization),  tells me he considers 2021-2022 a normal ‘irruption year’ a time when larger numbers of juvenile owls migrate south of the Arctic circle in search of food.

Although the approximately 10 square kilometres I visit regularly now seems to have less owls than in previous years – less rodent population perhaps? – I can usually spot four or five owls.  As I have said many times learning the habits of individual owls is key to getting consistently nice images.

Saturday was a particularly special day with two of them.

On my initial drive around I saw an adult male roosting on the ground in the middle of a field. Some photographers were taking pictures from the road which, given the distance, he could have cared less about. 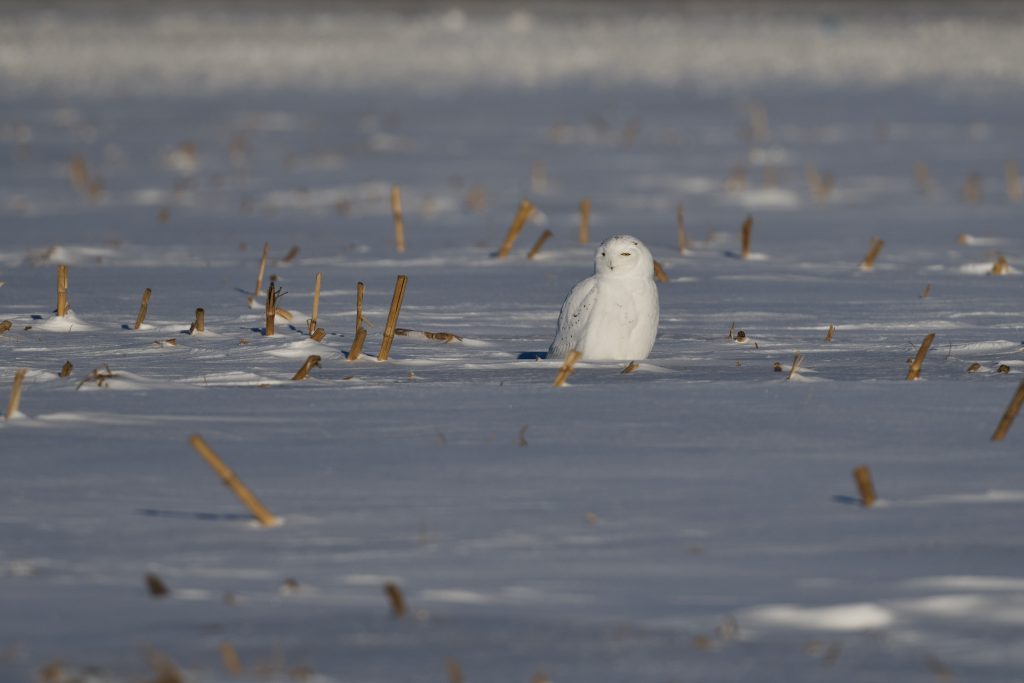 I kept driving, forming  a plan as to which owl I might spend time with. There were two others in some of the less accessible fields which I could see with my binoculars. However, just because I don’t see an owl doesn’t mean he/she isn’t there. On sunny afternoons they seem to roost longer on the ground and are well camouflaged in the snow.

About an hour had passed when I decided to look for the original male.  Had he moved in anticipation of claiming his hunting area for the night?  He was in the same exact spot.

Later in the afternoon the owls become restless and start moving about. The larger females dominate the fields I visit and the poor males are often displaced.  That time was nearing so I decided to go into the field and set up a position in the hopes he would eventually fly past me.

At this point I must say I have sat in freezing cold temperatures with this male owl at least twenty times this winter. I am sure he doesn’t see me as a threat. I have never chased him from place to place and always remain still – except for occasionally moving to get the circulation back into my bum or finger tips. Some times I have left the field with him remaining on the ground as the light has faded. He is also probably much warmer than me!

It was another frigid day yesterday (-16C with a slight wind). The excess cold drains camera batteries rather quickly so I carried a spare in a breast pocked in one of my upper layers. Another spare remains in my camera bag.

The snow was very deep and it took some effort to get across the field in a circular pattern to avoid heading straight towards him. When I had worked my way around so that the sun was at my back – the wind was also favourable  – I planted myself in the snow. He watched but seemed more interested in what was going on in nearby fields.

After 45 minutes of him sitting there I heard the scream of another snowy owl. Suddenly this female approached the male and went straight at him with her talons. 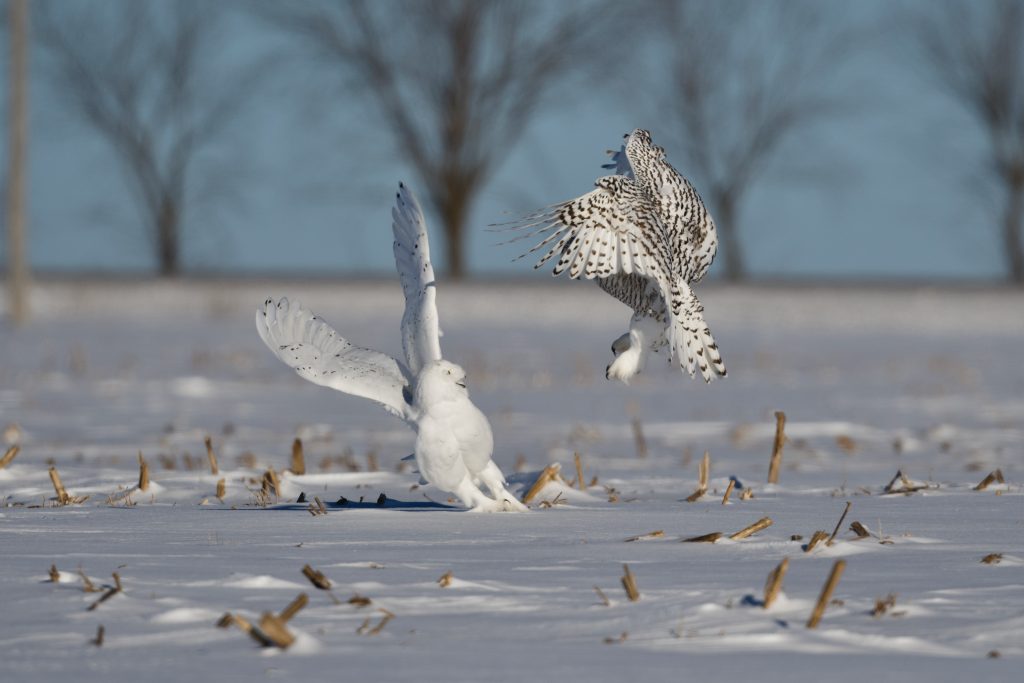 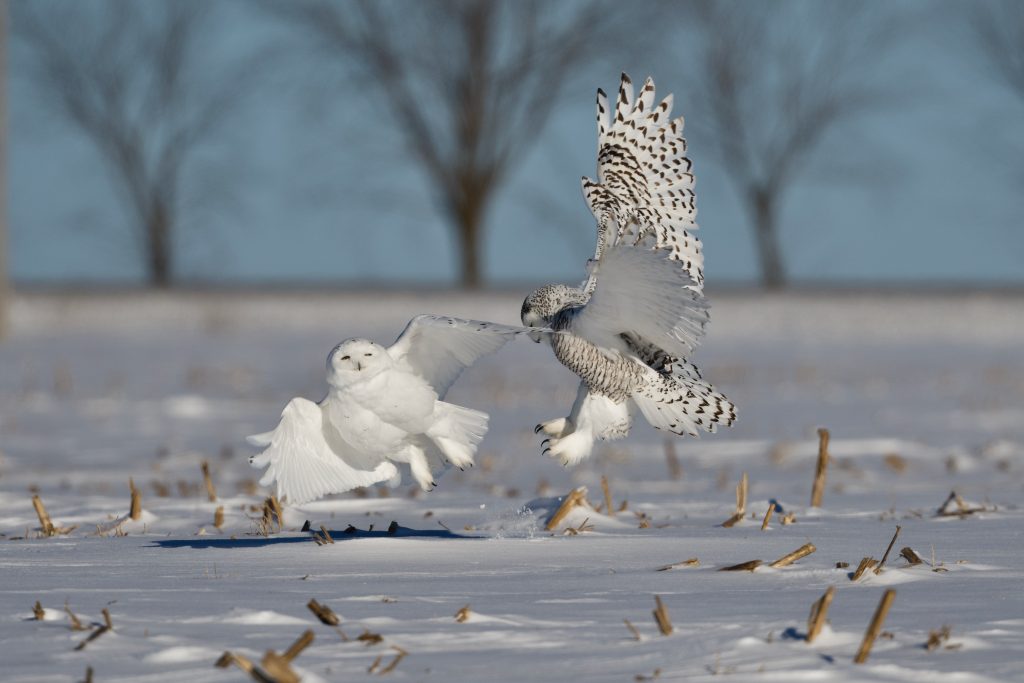 He recoiled in fear and just escaped what could have been a horrible assault.  He flew away.  Almost immediately she gave chase and to my great surprise and pleasure he came back towards me.

Now he was really paying attention to what was going on. Through my 500mm camera lens I could see the female had landed in a tree about four hundred metres away. Clearly this was going to be her field for the nightly hunt. So, I waited for the male to leave.

Several cars stopped along the road and I could hear the people excitedly taking pictures of the owl as he was nearer the road than he had been before. My camera battery was less than half full so I quickly changed in order to have maximum power for the remainder of my time in the field.

He preened and to my delight he turned in my direction. For about thirty seconds he stared at me before taking flight and heading my way. The beauty about knowing the habits of individual birds is that you can guess, with some degree of accuracy, where they may go next. This guy made his way to a nearby tree over my left shoulder.  I have photographed him there several times.  As he came closer he turned to look at me as if to say ‘did you get it?’ 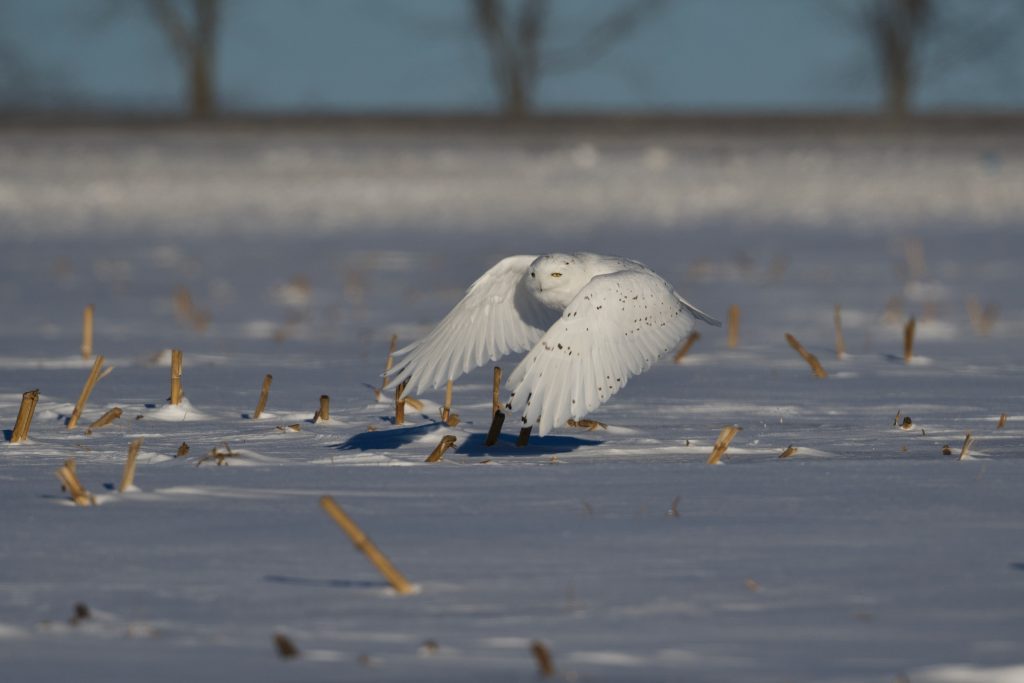 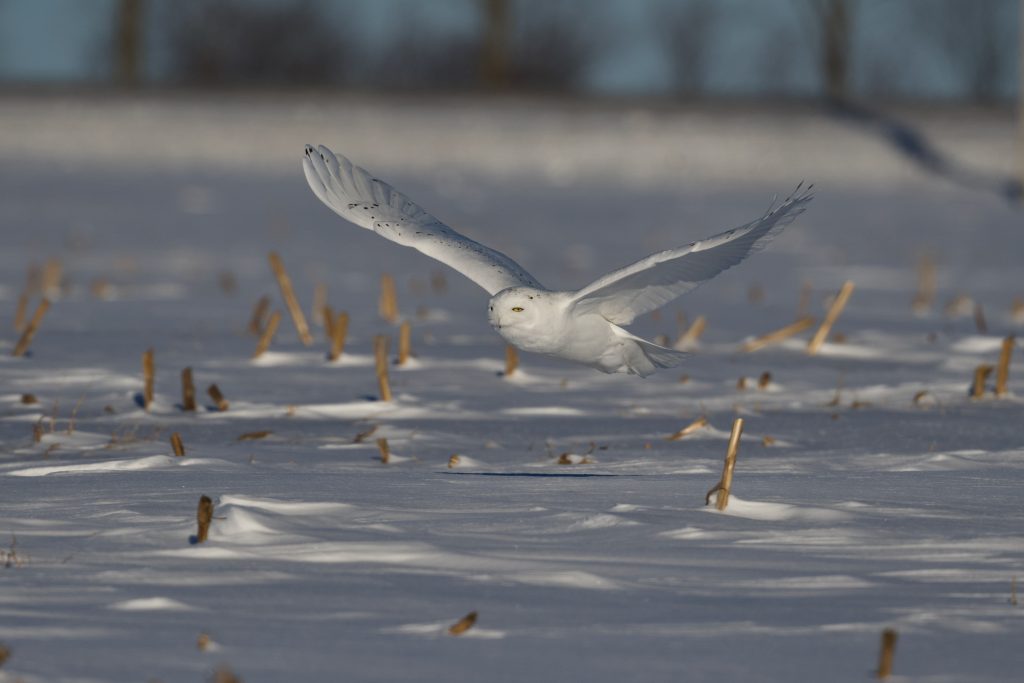 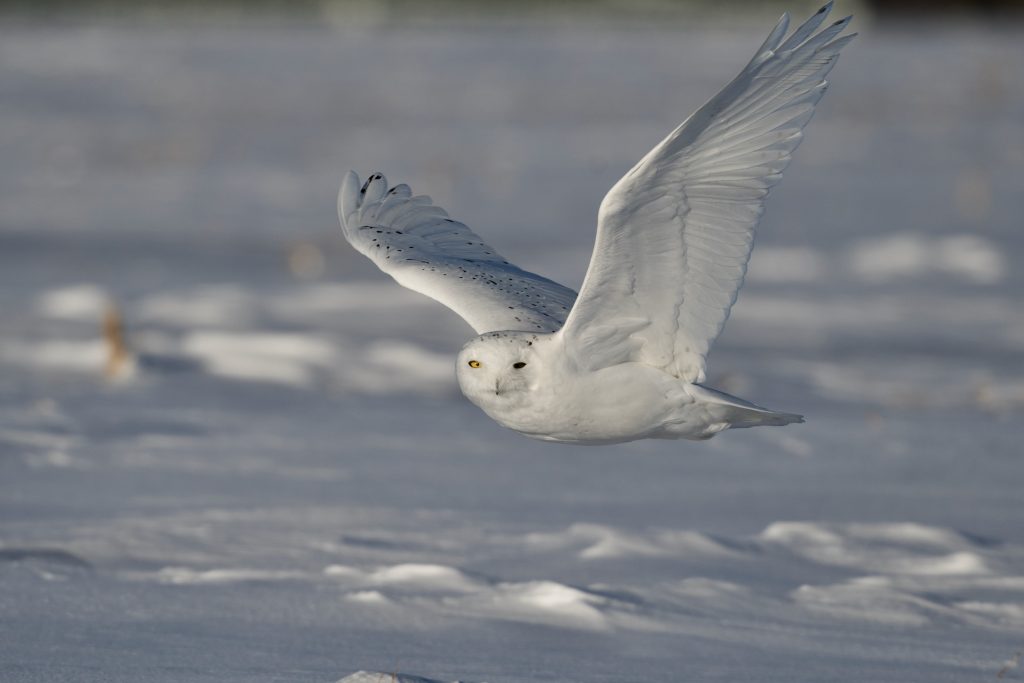 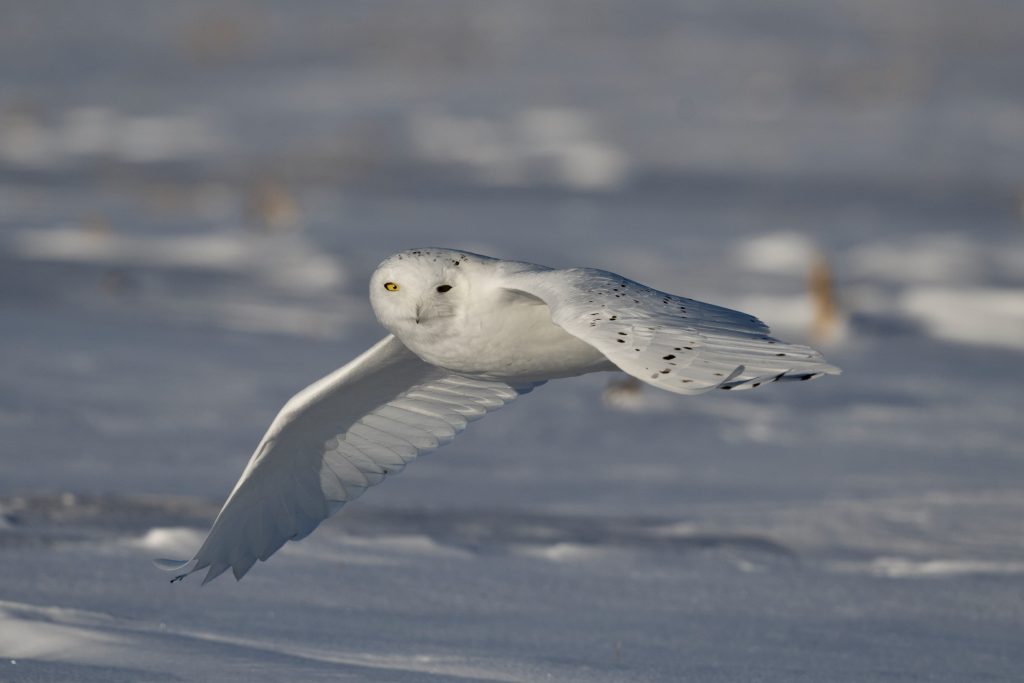 At last I could stand up and stretch my legs and back. I watched him go to the tree before turning and trudging through the snow back to my car. To see the aggression of the female owl play out right in front of me was a rare treat. I would have been delighted with my excursion had the male owl not flown past me. But to have such a sequence of images with this bird in addition was icing on the cake.

I’d like to thank all those who joined us for my ‘Wildlife in Peril’ presentation. If you are not on my mailing list and wish to be please send me an email. That is how I promote my presentations. Enjoy nature!!!