March has brought some turbulent weather to southern Ontario but I have been regularly visiting the snowy owls while wondering how much more time I will have with them. A year ago I found just one owl in the first week of April, so, time is short.

It makes sense that the mature owls, those who will look for a mate up in the Arctic breeding grounds, will be heading north first. So I was curious which owls remained – what with temperatures going into the teens and then dropping more than twenty degrees celsius and bringing snow squalls! 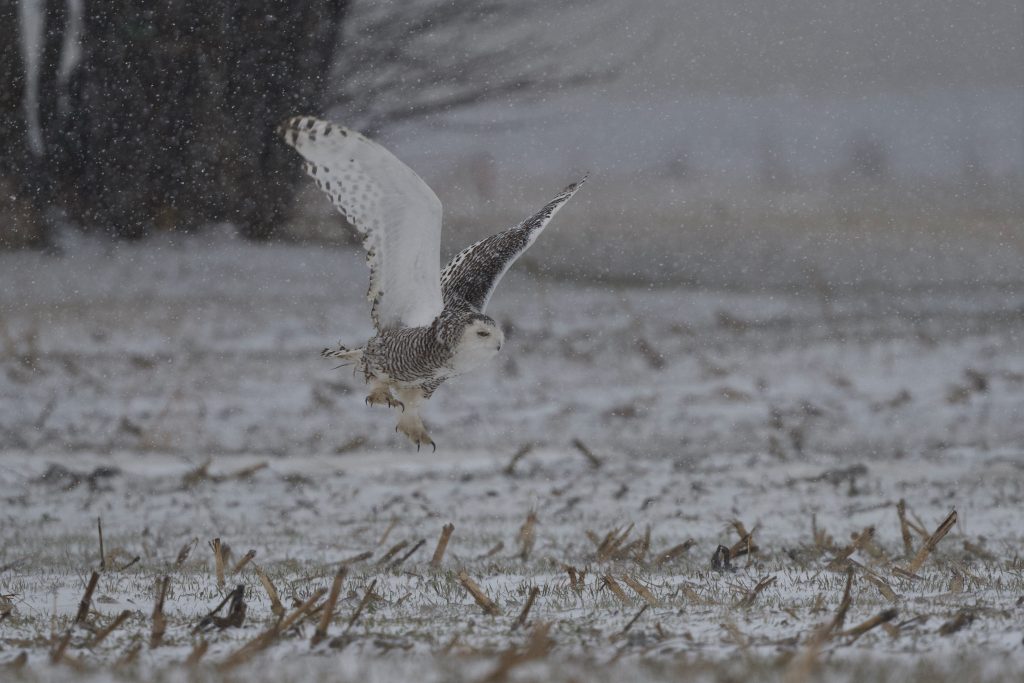 Driving in snow squalls is tense. Some might call it reckless. But I had made the decision last sunday to see what photographic opportunities might arise. Besides, the radar showed an eventual clearing which I knew would provide some opportunities for snowy owl photography – if I could find an owl.

The area I frequent is Mennonite country. Sunday is visiting day so its normal to see lots of horse drawn buggies along those country roads. But when the visibility drops to mere feet, and you suddenly see a buggie in front of your car, that can cause some hair raising moments. These conditions cause the owls to ‘hunker down’ as the winds are powerful and, even though they have great vision, the white-out affects them too.

There were only a couple of cars along this route.  Still, I had my hazards lights on constantly and when I spotted a familiar young male owl in a field close to the road I stopped. It was important to leave my vehicle somewhere out of the path of any potential oncoming traffic. So I chose to drive over to a nearby dirt road which is not often used in the winter. I left my car with the hazard lights on then walked towards the field. 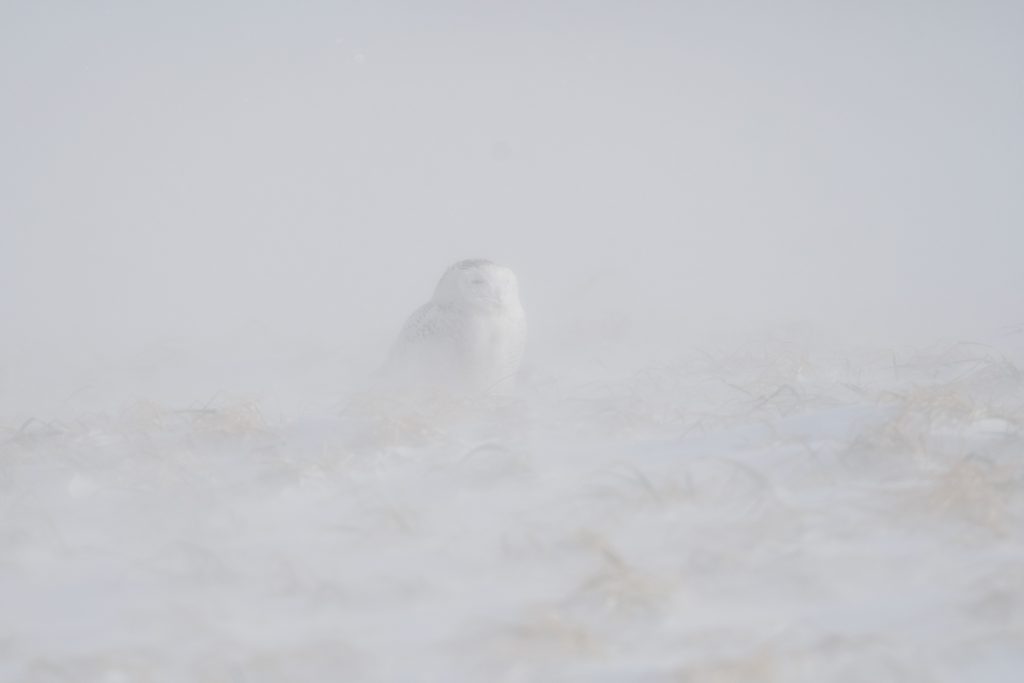 The winds were gusting to 80km/hr kicking up snow and it was a tough slog to get to the vantage point I had imagined. The sun was occasionally peaking through clouds adding a little light to the mix and the owl would appear then disappear. I climbed down into the roadside ditch to get on eye-level with the owl while maintaining a good distance. The last thing I wanted to do was spook him and possibly cause harm by getting him blown about in the wind.

This owl has seen me many times before and I believe he knows I am not a threat. He has hunted in the same field several times with me present.

Eventually the clouds gave way to some sunlight and though the winds were still very strong the owl began looking around. After apparently spotting prey he lifted off and let the wind carry him to a corner of the field equidistant from my position in the ditch. He looked down at the ground beneath his feet and I presume he had gone after a vole or a mouse and missed. 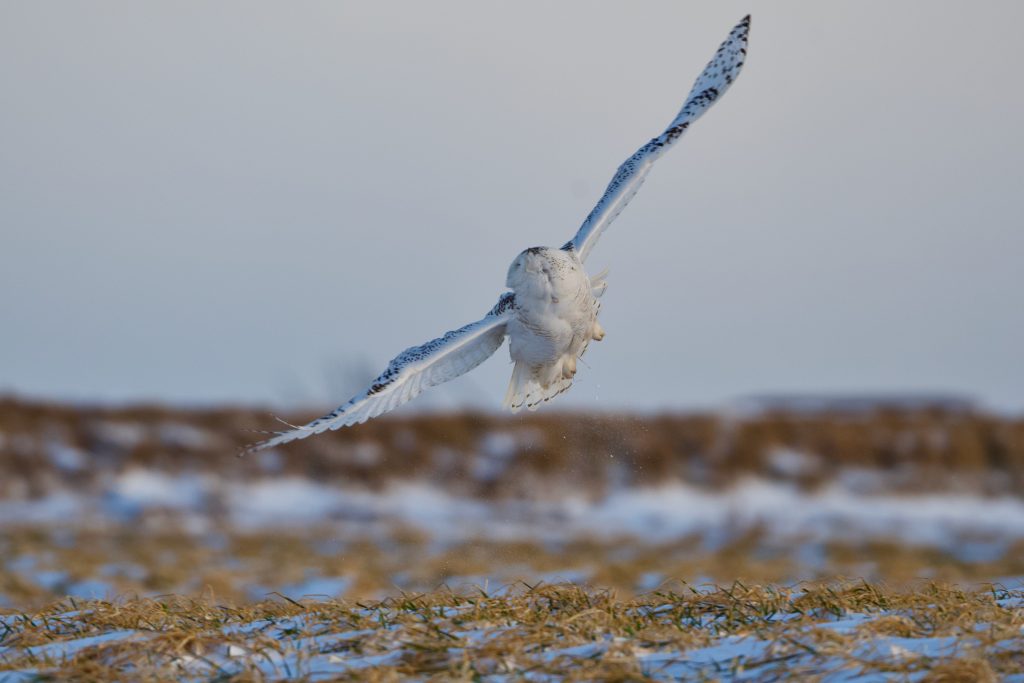 Snowy owls have excellent vision and hearing but they are far sighted. They cannot see objects close to them. I watched him tilt his head listening for movement. After a few seconds he gave up and flew back to the original mound where he landed and sheltered from the wind once more. 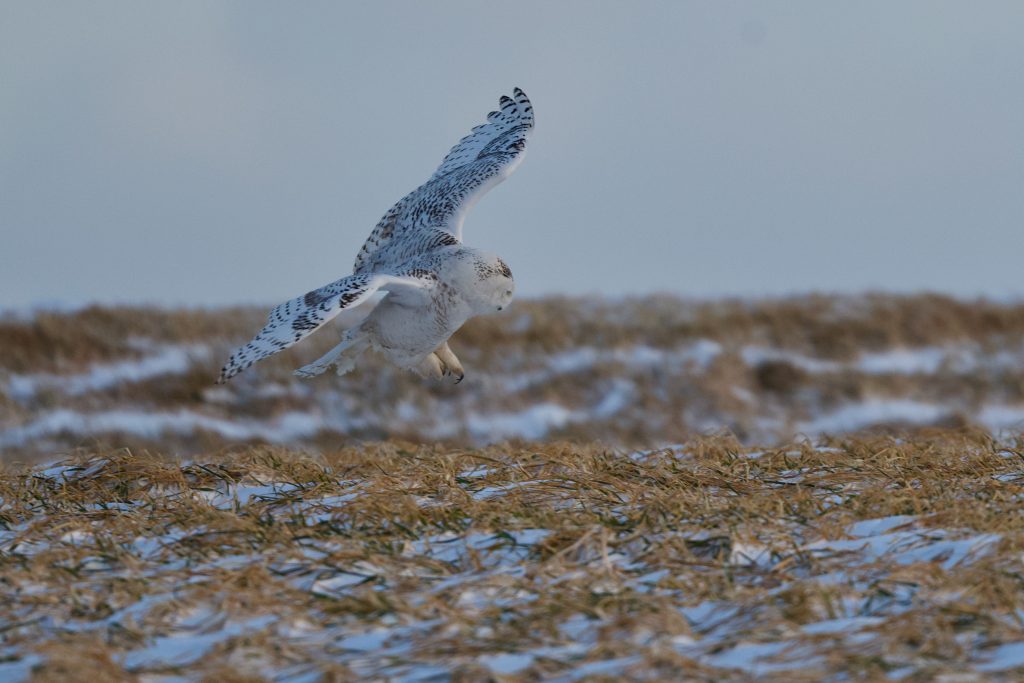 Eventually, having enjoyed another great encounter with this little guy I returned to my car. I visited him a day later when the conditions were far better. I spent an hour sitting on my butt waiting to see if he would hunt again. But there was a northern harrier in the adjacent field and a mature female snowy owl across the road which seemed to keep him grounded. Finally he flew across the field and landed in a tree near my car. 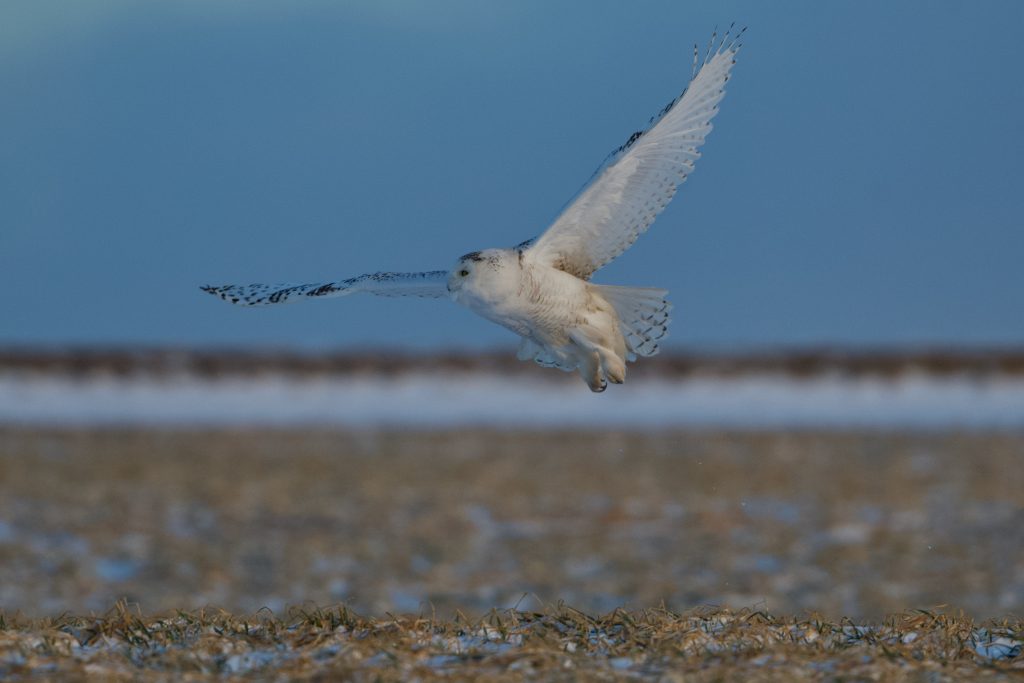 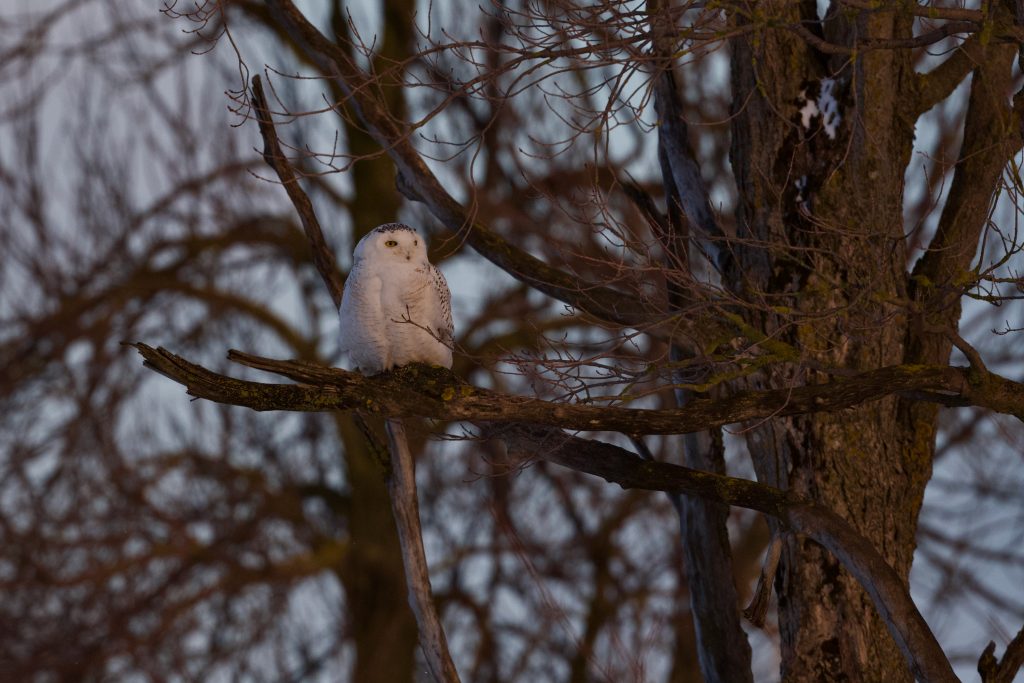 The sun went down while he remained in that tree for some time. Then, he spotted movement in his favourite field and attacked. That was the end of the encounter for me. Beautiful bird. I hope to see him again in coming days!

If you have enjoyed my snowy owl posts I have good news:

My friends at the Woodstock Field Naturalists’ Club have invited me to speak on snowy owls via Zoom on Monday May 2nd, 2022. The presentation will begin at 7:30 p.m. eastern time.

They have reserved 50 places for my readers on a ‘first come first serve’ basis.

If you are interested in seeing “Snowy Owls – Visitors From The Arctic’ send me an email to reserve a spot: pgains@golden.net