Several times the past week I spent time with snowy owls about 40 minutes drive from my home in Cambridge, Ontario. I prefer going up there during the week as there are normally fewer photographers out there than on the weekends. That was before Covid.

On Wednesday I saw no less than five other vehicles driving along a dirt road which bisects two long fields favoured by owls. There was a female owl on top of a tree and the photographers were sitting in their cars watching. A couple were standing there with long lenses.

The road isn’t maintained in the winter and was covered with ice. The only people using it are Mennonite farmers on their horse drawn buggies and the snowy owl seeking photographers.

I dropped in to see the family who owns the farm. I have met them a few times over the years and wanted to re-establish contact to ensure that I was still welcome in their fields. Some of the farmers are becoming agitated by photographers and others simply walking out onto their property and have posted ‘No Trespassing’ signs. As one told me, ‘When you see a car you don’t recognize you start wondering!”

Another has told me that “because you asked permission you can go out there but if you see anyone else out there tell them to get the hell off my property!”

This family remembered me and mother and children stood at the door saying I was welcome to go into their fields still. I wasted no time and moved my car off their driveway and onto the road. Having been up there for seven or eight winters now I have ‘mapped’ where the ground in the field meets the level of the road – avoiding deep ditches filled with snow. And since there was no other photographer in that field – if there was I would be courteous enough to find another owl – I went into the field.

Owls can turn their heads 270 degrees and this one was checking out the cars parked on the road, other owls in nearby fields, as well as me, while looking for prey. Suddenly she flew away from me and launched herself at an incoming owl. Although they didn’t make contact the other owl landed on the ground. The first owl made a circle and flew to another field behind the cars. I think the photographers were watching that one because later, as I left the area, I could see two people walking towards her as she was now perched in a tree.

The second owl now hovered over something. I assumed it had caught a mouse and I hoped it would turn towards me and I would get a clear shot. Alas, she had swallowed her prey by the time she turned. 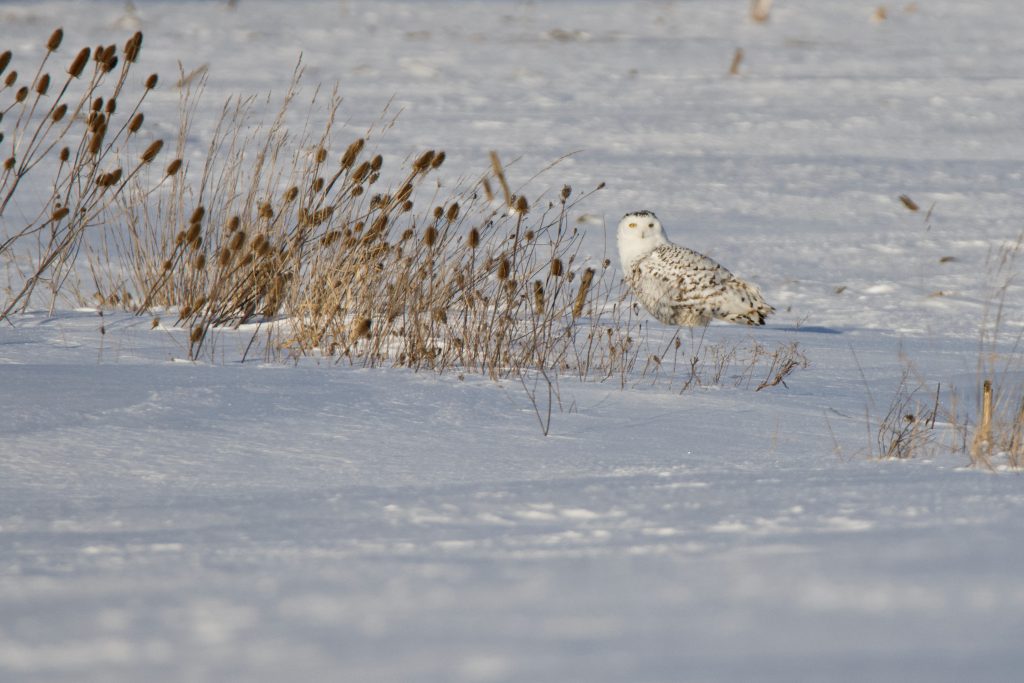 Looking around at her options she decided to fly past me. I was fortunate to get a sequence of images in beautiful hazy, late afternoon light. On my next visit I will take the family a 13″ x 19″ print I have made of this owl in flight. 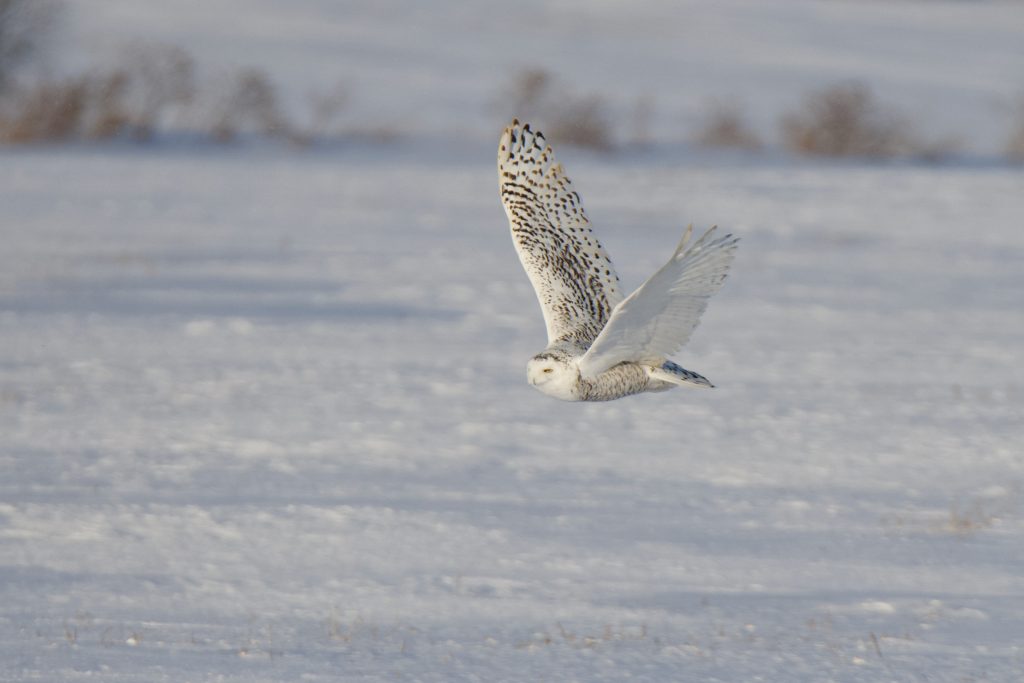 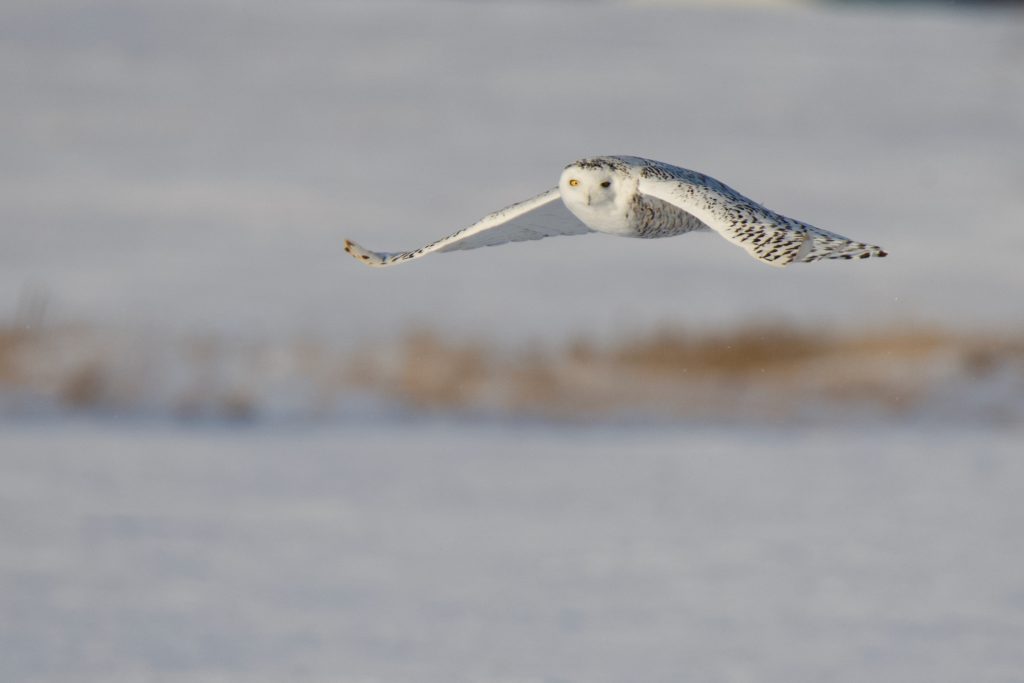 I was out again on Friday at a time when the north winds were kicking up the snow,  driving the temperature down to the minus teens Celsius. As I drove around my usual loop I was thinking that it was another occasion where I would go home ‘skunked’ – unable to get a single decent photograph. Then I saw a female owl perched on a utility pole facing into a field. I took some photos of her as she perched and checked the histogram on the back of my camera and made adjustments. Then she took off.

I snapped away knowing that I wouldn’t keep these shots, after all, she was flying away from me and not past me. It was more it being a case of in-the-field practice. As she flew low across the field I saw another female leave the ground and fly towards her. Again they were competing for territory. I was too far away to get a shot so I wandered across the field and positioned myself in between the two in case they challenged each other again. They were about 100 metres apart.

The first owl conceded and flew further away in a northerly direction before landing on the ground. The second owl, seen below, remained there for another ten minutes. I kneeled down to her eye level and snapped away. Then she turned around moving to a tree further down the field.

I left them and headed back to my car. I had an image that I was pleased with – a female in twilight with snow falling around her.  Now she would need to catch up to a dozen mice, a daily requirement,  in order to sustain herself through the winter. 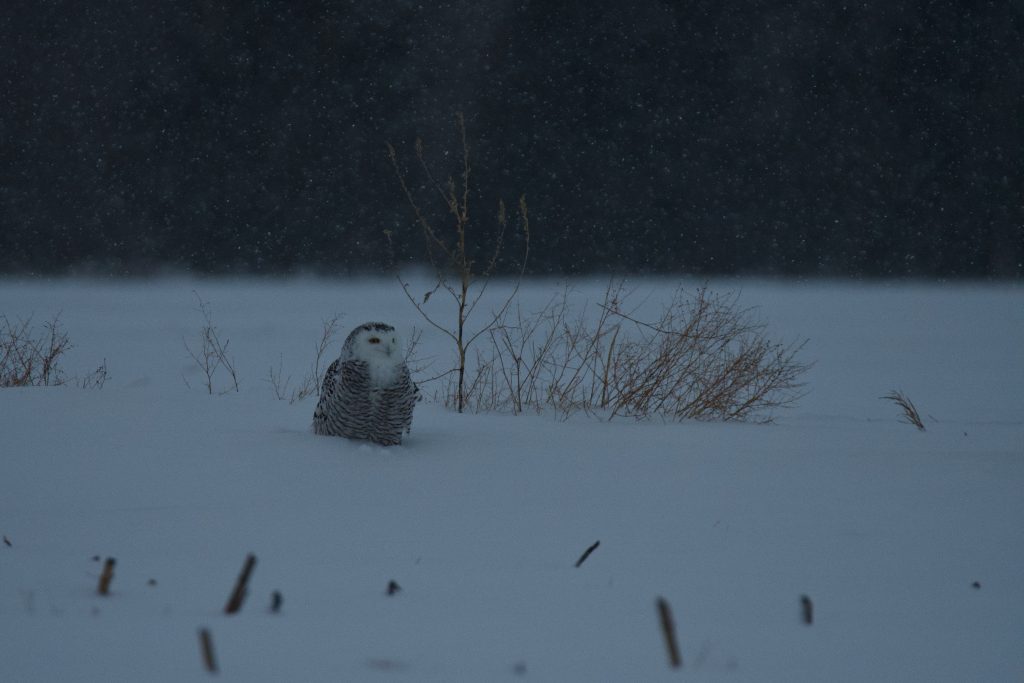