Like many photographers I am delighted to see that snowy owls have returned to southern Ontario for the winter. Having flown as much as 300 kilometres a day to get to these fields they are a treat to observe and to photograph.

A sore lower back – the result of a slip on a patch of ice – has limited my journeys to ‘snowy owl country’ to two but just the other day I spotted four or possibly five owls on a drive around my usual stomping grounds. The first was an all white male perched on top of a utility pole. I stopped only to snap a couple of images to check the light. It was awfully windy with a little snow coming down sporadically. I decided to keep driving the same route I have taken the past seven winters making a mental note to look for this male on my next lap.

Further along, using my binoculars, I could see a large female sitting atop a tree a few hundred metres from the road. This has been a popular perch for owls as long as I have been photographing them. I drove further on my circuit to see where I might find others before checking the time. I guessed we were into the last hour or so before the light would make picture taking a challenge so banked on the large female to be in the same tree. I reckoned she was ready to hunt and who knows what that would bring?

I parked my car on the shoulder of the road, put on my goretex pants over top of my other two layers, zipped up my down jacket and walked into the field. I should mention that, over the years, I have introduced myself to the farmers who own these fields and have been granted permission to go onto their property. This is why I don’t go to some of the better known snowy owl areas.

It was incredibly windy and snow was blowing. As I got nearer to her I knew she was watching me so I slowly approached at a 45 degree angle. Then I started taking some ‘test shots’ to see if there were any twigs in front of her head which would interfere with my Nikon D500’s autofocus or obscure her eyes. I moved into a position where I was almost directly in front of her.

She was facing the wind, as raptors generally do, and was bouncing around holding firm to the branch with her mighty talons. I approached to within about forty metres and waited to see if she would hunt hoping all the while that the snow would stop and the light might improve. Over forty-five minutes she kept surveying the surrounding fields and curiously looking up periodically as if studying the clouds. Snowy owls can see great distances so I suspected she was also watching the two males I had seen – the one atop the utility pole and, the second, deep in another field about a kilometre away.

My hands were quickly hurting from the -7C cold despite my very expensive Mountain Hardwear ‘touchscreen compatible’ gloves and I was hoping she would do something exciting. Suddenly she took off, flying past me and down towards the middle of the field behind me. I turned into the wind and tried to follow her movements. 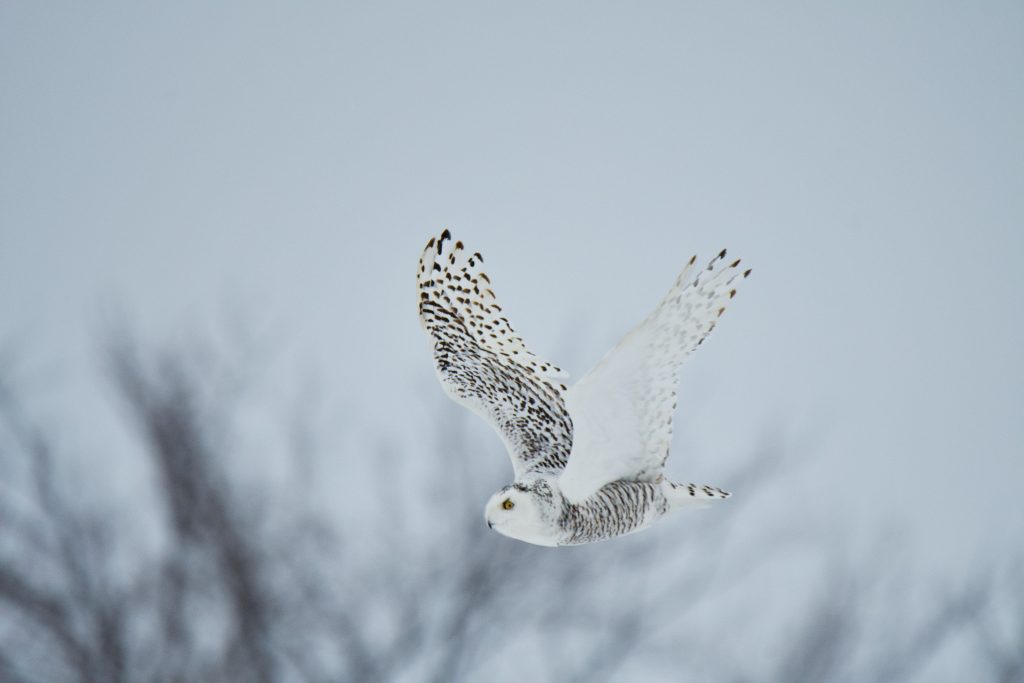 She landed on the ground and I could see a mouse running around the snow. Quickly she snatched it then turned to look at me once before swallowing her prey whole. I managed to keep my camera still for a few shots. Once she had enjoyed her meal she hopped up onto a nearby snowbank and perched there for five or ten minutes before deciding to go back to her original perch in that tree. 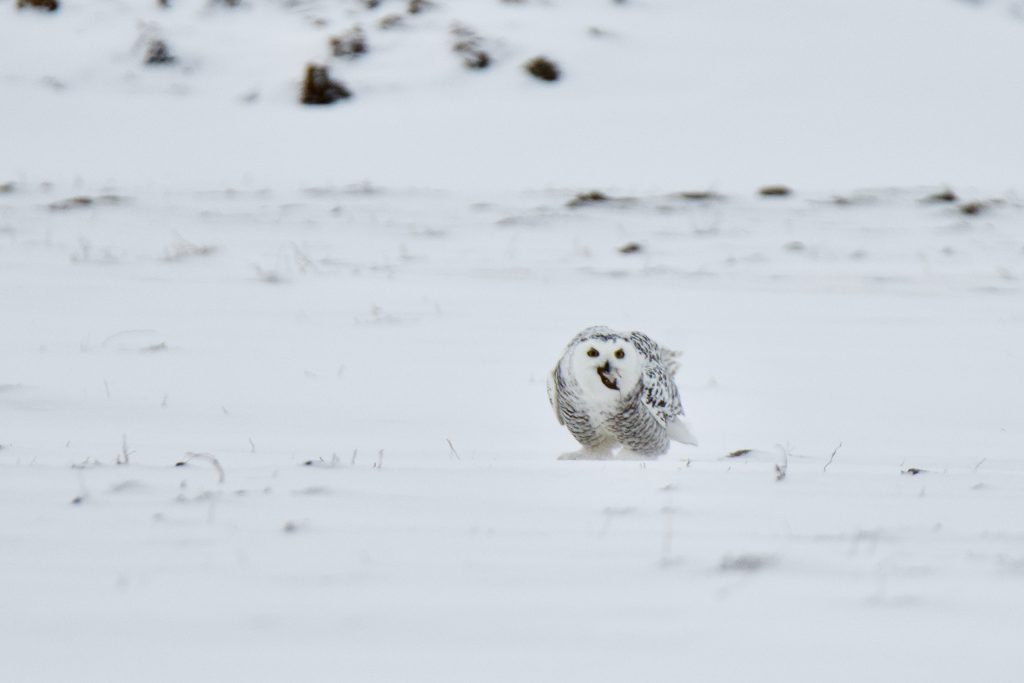 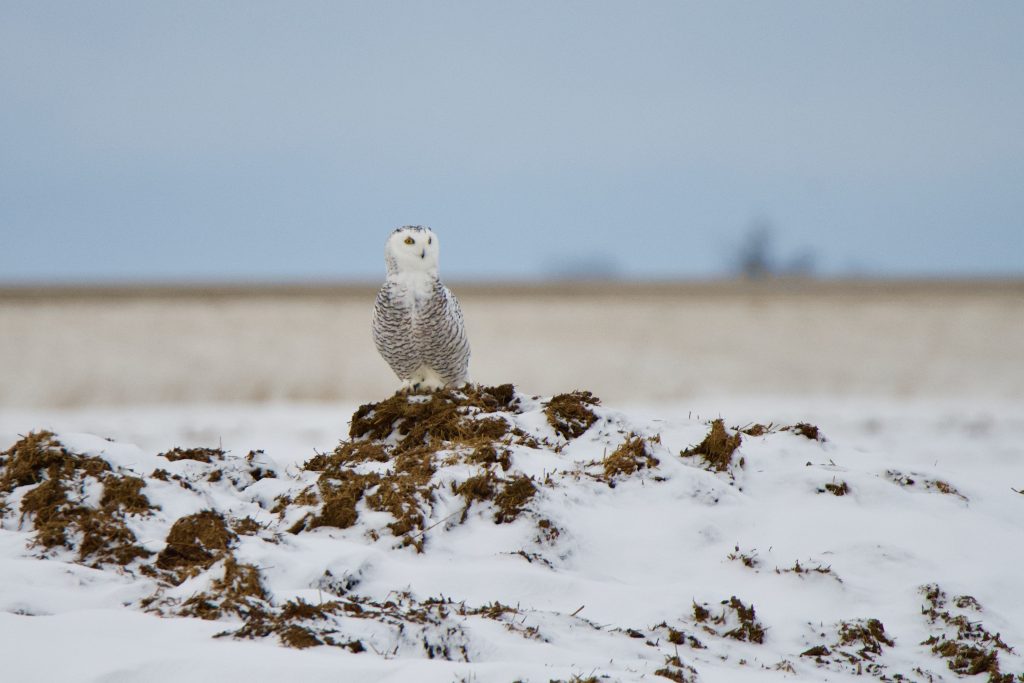 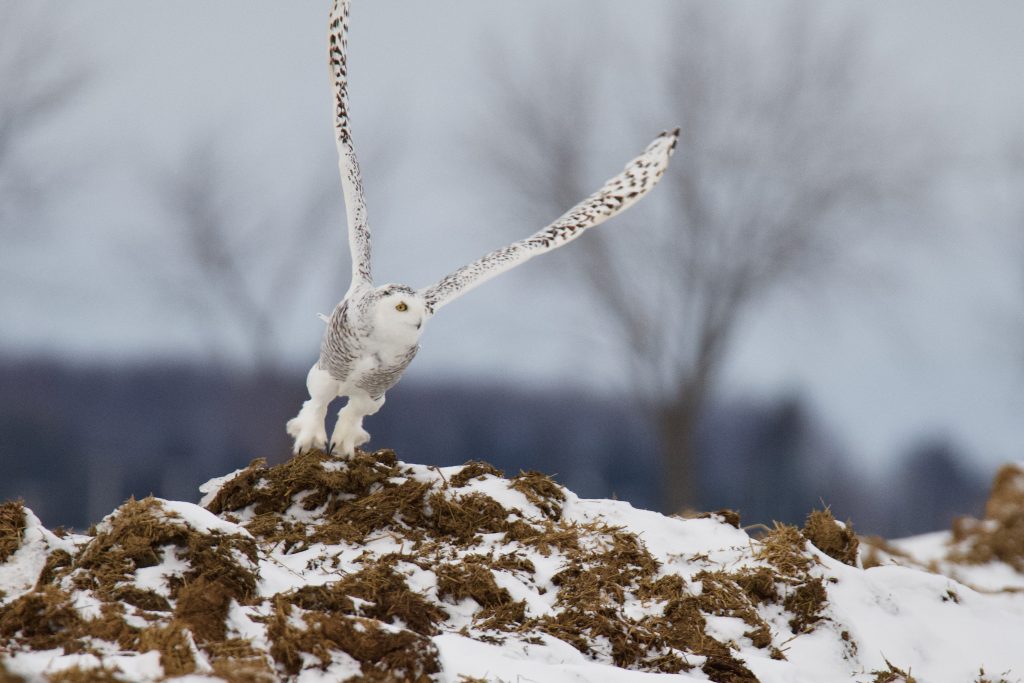 Although I have captured better images this was, nonetheless, a wonderful start to my winter excursions. I had forgotten what its like to stand in a field in sub zero temperatures with the wind blowing forcefully. The light was no longer helpful so I got back in my car and drove another lap to survey the land for my next trip. That’s when I saw another female flying over head as well as another male perched upon a utility pole 3km from the original sighting.

I now have a good idea where to look on my next venture out there and, of course, I do have my fingers crossed that there is less wind and better light. I hope you are enjoying wildlife and nature walks despite the wintry weather. Stay well!