Enduring extreme weather conditions for hours or hiking a long distance in the hope of getting a special image is counter intuitive. But you have to be out there, camera in hand, for things to happen.

When you stop to think about the strength of purpose, which explorers of yesteryear or even in modern times have displayed, it seems to make it easier to get outdoors.

I read incessantly, not just photography magazines and articles. I buy lots of books and admire those who overcome catastrophe, fight the elements to achieve success and do things I know I am not capable of or willing to pursue.

When the wind is howling and the temperatures have plummeted it makes it easier to get out with those snowy owls when I think that this is nothing compared to the adventures of Sir Ernest Shackleton or Sir Edmund Hillary, for instance.

Here, then, in no particular order, are ten of my favourite outdoor books for inspiration.

Having lost the race to be the first man to reach the South Pole Sir Ernest Shackleton plotted to become the first to cross Antarctica in 1915. Success would restore British pride. But, when his ship, Endurance, was trapped in sea ice and ultimately crushed Shackleton’s mission became one of survival. Launching lifeboats into the roughest seas on the planet, enduring frostbite and limiting themselves to rations of biscuits and seal meat makes for an incredible read.

I picked up a copy in one of the few English language bookstores in Punta Arenas, Chile during my December 2019 trip to Patagonia. I had read ‘Endurance’ the account of this expedition written by Frank Worsley, who captained the ship by the same name. But this is Shackleton – in his own words.

‘High Adventure: The True Story of The first Ascent of Everest’ by Sir Edmund Hillary

I have never been to the Himalayas and I will likely never climb Mount Everest. But reading the memoir of the man who, along with Tenzing Norgay, reached the summit first is just another push for me to get out into mountains and forests. Further it has led me to contemplate the hike to Everest base camp.

On a reconnaissance mission to Everest they had to find the best climbing route by literally carving steps through the ice fields. And, they didn’t have medicines to deal with altitude sickness but used codeine to numb the headaches. The equipment they used would be considered primitive by today’s standards. It is hard to fathom the mind of these phenomenal alpinists.

‘The Rise of Wolf 8’ by Rick McIntyre

There are several excellent books about wolves, one of the truly misunderstood species. Rick McIntyre is revered for his decades long observation of wolves in Yellowstone National Park and in this book his love for wolves is apparent. Through his observations he is able to detail the varied personalities of individual wolves and reveal the hierarchy in the many wolf packs he observed.

Wolf 8 was the runt of a litter, bullied by his siblings, but eventually due to incredible courage, compassion and leadership skills – yes, I know I am attributing human qualities to a wolf – he became the alpha male of the Rose Creek pack. Fascinating stuff.

‘Beyond the Trees’ by Adam Shoalts

A fearless modern day explorer Shoalts chose to celebrate Canada’s 150th birthday by crossing the Canadian Arctic in 2017 – in a canoe. Battling intense currents – unmelted spring ice and uncharted territory in which bears, wolves and muskox were his curious neighbours, Shoalts proves his toughness and ingenuity.

Encounters with the very few humans he encountered – fishermen coming downstream for instance – were sometimes amusing. None could believe anybody would be crazy enough to paddle, portage and pole a canoe up stream.

Shoalts really makes a case, perhaps inadvertently, for people to visit Canada’s northern territories. Moreover, ‘Beyond the Trees’ underscores the need to protect our wilderness. 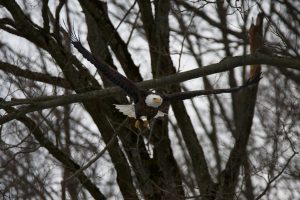 ‘Alone on the Wall’ by Alex Honnold

I have the utmost respect for mountaineers. Though my experience with mountains is limited to hiking up them I revere those who explore new routes up cliff faces and climb the tallest peaks in the world. Then there is Alex Honnold.

The Oscar winning ‘Free Solo’ introduced him to a worldwide audience for his sub four hour climb up the sheer face of 3,000 foot El Capitan. But through this book he reveals who he is and how he embraced the dangers of rock climbing while living in a van. No you won’t catch me climbing up a rock face or a gym wall but I feel something of a kinship with anyone who is passionate about the outdoors.

‘Walking the Himalayas’ by Levison Wood

Wood is an ex-British soldier who has become a noted explorer – by foot. This is his latest book and it traces his hike across the Himalayas from Afghanistan to Bhutan. Through the journey he reunites with a Nepalese friend, who had sheltered him from Maoist rebels a decade earlier, and meets the Dalai Lama. Those are the pleasant bits.
There are plenty of challenges to overcome – rivers that have overflowed, avalanches and a car crash that nearly killed him and his guide. Finishing the hike was of the utmost importance to Wood and you want to cheer for him as he passes through some of the most beautiful mountains in the world.

‘Path of the Puma’ by Jim Williams

Published by Patagonia Clothing company’s book division this outlines the healthy population growth of this big cat across the Americas. They are called cougars in British Columbia, mountain lions in the U.S. and pumas in South America. Like other apex predators they have been accused of killing livestock and for this reason were hunted. But Williams outlines research proving they have gotten a bad rap.

Reading this book inspired me to make my own trip to Chile’s Patagonia region where ranchers have turned over land for wildlife tourism. They have figured out they can make more money than from ranching. This book has also helped shape my positive feelings about this big cat. 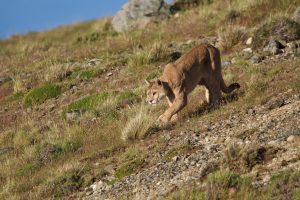 ‘Road Trip Rwanda’ by Will Ferguson

Will Ferguson is an award wining Canadian humorist and I picked this book up for two reasons. First, I wanted to know what led to Ferguson taking this trip to Rwanda of all places. And second, was this going to be funny? It is a wonderful book which lives up to the author’s reputation. And it is informative at the same time.

Twenty six years ago during the Rwandan genocide I wrote a Globe and Mail feature story on a Rwandan distance runner who had to watch from afar as his country imploded. Now, the country has free healthcare for 97% of its population and has a booming economy. Lots to learn here.

‘Down From the Mountain: The Life and Death of a Grizzly Bear’ by Bryce Andrews

On a trip to Alaska two years ago I was fortunate to encounter a grizzly bear fishing for salmon in a river. I have been fascinated with them ever since. In this book Bryce Andrews writes about human – bear conflicts and in particular a unique farm in Montana where a Grizzly bear and her cubs entered a corn field and, much to the chagrin of the rancher, became a little too comfortable.

The book helps reveal the tension between humans and predators but dispels the notion that they should be shot on sight. It is incredibly moving. There were several times when I was overcome by tears. It’s another reminder that we share the planet with an array of incredibly beautiful species. 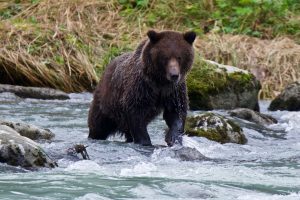 ‘Call of The Wild’ by Jack London

I know the Harrison Ford film ‘Call of the Wild’ has just been released but that’s merely a coincidence for me adding Jack London’s great adventure book to the list. Many of us read Jack London when we were in high school or earlier. In those days its relevance was lost on me – I rebelled against being told what I must read.

On a 2017 trip to Whitehorse I picked up a copy of ‘Call of the Wild’ in a local book store and since it was a bright sunny day I sat down on a bench by the Yukon River and enjoyed some solitary time. There’s something about reading a nature themed book set in wilderness and realizing you are in that wilderness.