As Mother’s Day is upon us, and we honour those who gave us and our loved ones life, I recall my own mum who passed away almost seven years ago.

Mum always wanted the best for my brother and me and always encouraged us, and challenged us in numerous pursuits whether it was athletics, education, art or music. Together with our dad she brought us to Canada when life was bleak in Coventry, England back in the late ’60’s.

And, she was a keen wildlife enthusiast.

Family time often involved nature walks along river banks or camping in provincial parks.  Other times we would sit in front of the television marvelling at Mutual of Omaha’s Wild Kingdom and other wildlife documentary series. I know she would enjoy these photos of mothers and their offspring – as well as the stories behind them……………………………

On a 2016 trip to the Brazilian Pantanal my guide Fabricio Dorileo and I came upon this jaguar and her cubs. The mother would protect her cubs at all costs from the dangers lurking nearby: caiman crocodiles, boa constrictors and especially adult male jaguars. Here she brought the cubs out, one at a time, for a drink. 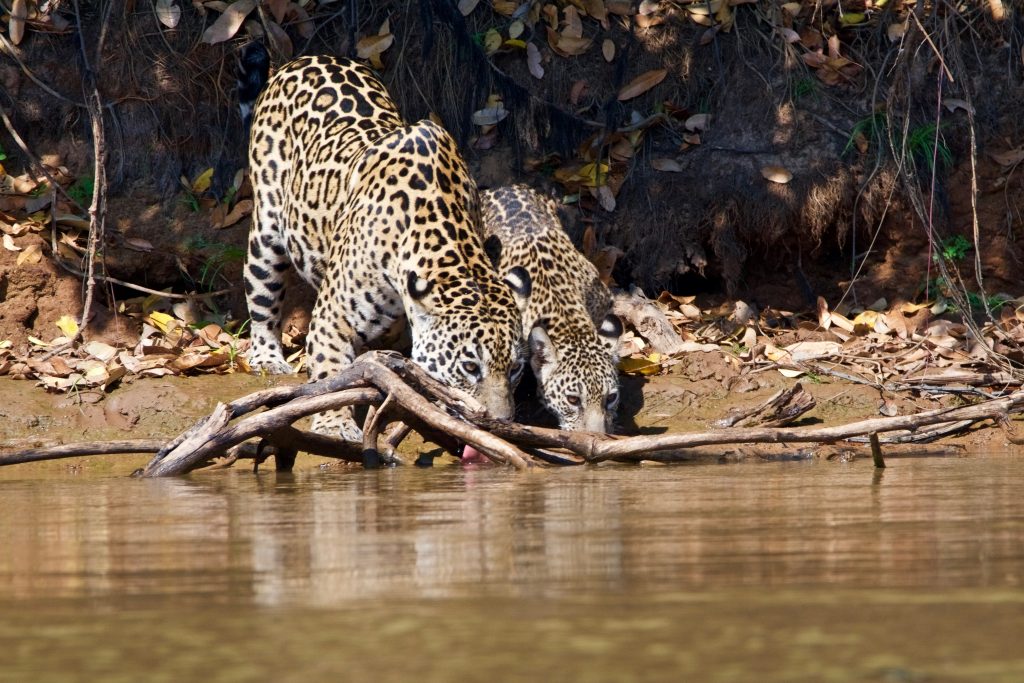 In December 2019 I traveled to Chilean Patagonia to photograph wildlife. This image of a mother puma with three of her four cubs accompanied a story I wrote for The Herald newspaper in Britain. The cubs had been playing as she slept but, when she heard movement in the valley below, she suddenly rolled over and paid attention. Her cubs surrounded her.  Just the day before she had protected them from a marauding adult male puma that intended to kill them. Here she is looking over in our direction to make sure we had not come closer while she had been inattentive. 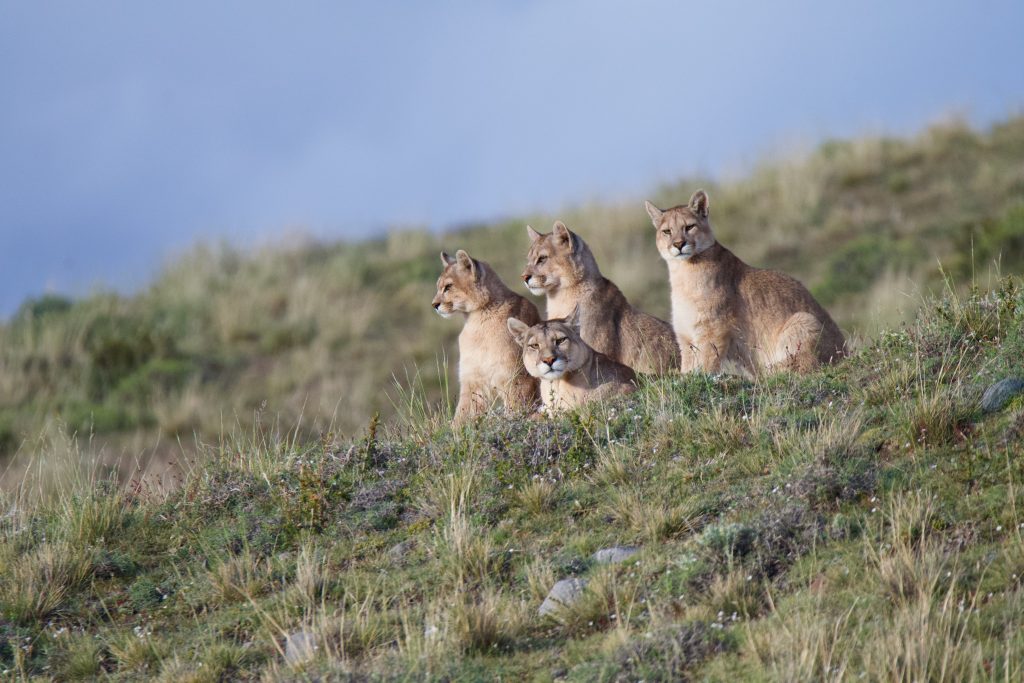 While my primary objective in Patagonia was to get images of pumas we also encountered this Patagonian grey fox with her kits. She had left them alone while she went in search of food. Upon her return with what appeared to be a rabbit the four kits raced out to greet her. She dropped the prey to allow her kits to nurse. 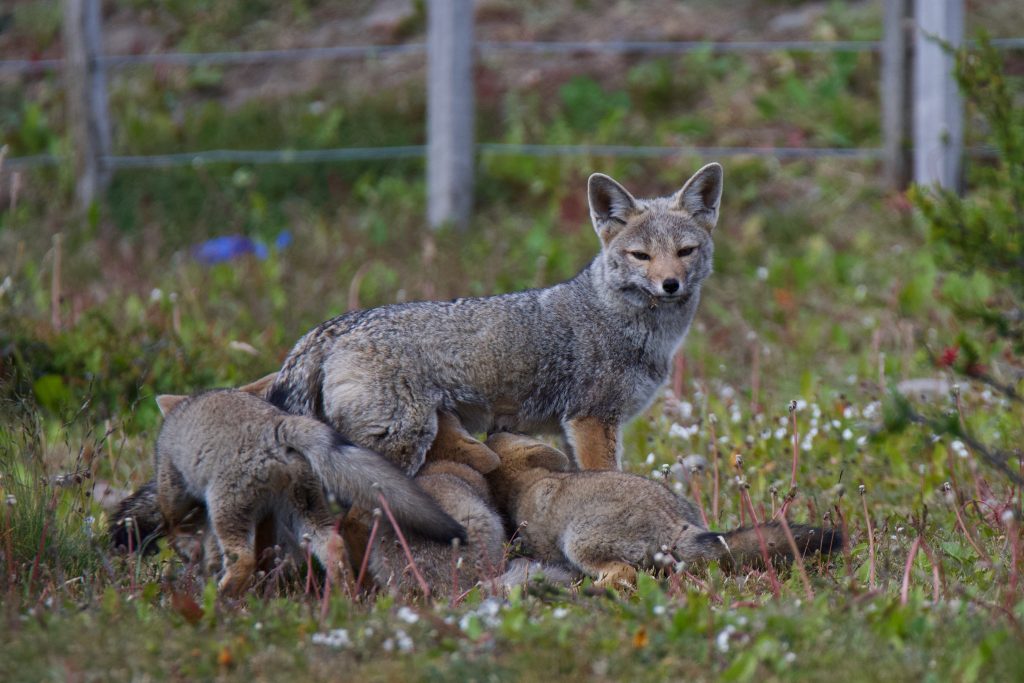 I took this image of a mother Great Horned Owl and her owlet in May 2019 perhaps two weeks after it had fledged – flown for the first time. The owlet flew between trees venturing further each day. The mother watched over her young one always. Eventually the curious youngster’s flights became longer and it would explore the nearby trees by itself. 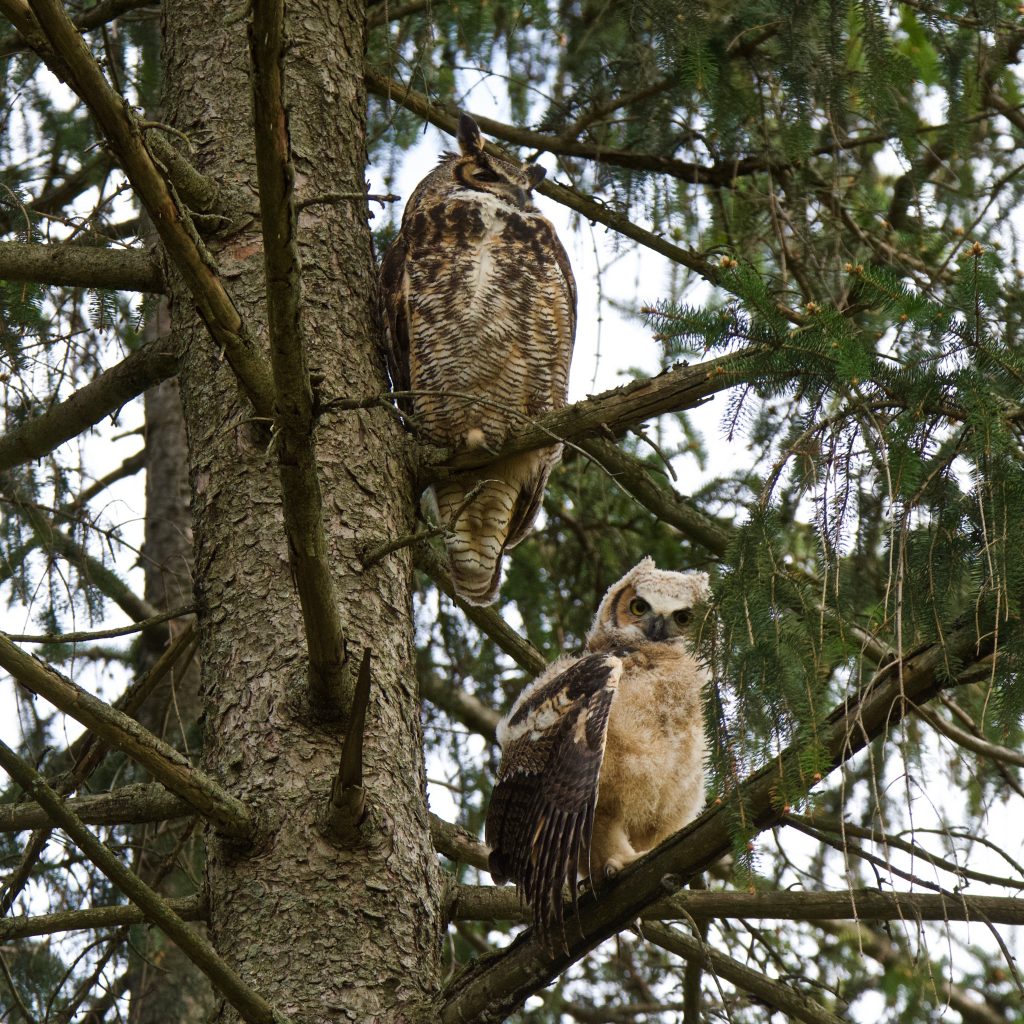 Even baby caiman crocodiles count on their mothers. This pair stayed close to the mother along the banks of the Cuiaba River near Porto Jofre, Brazil. Believe it or not the caimans make an attractive prey for adult jaguars. 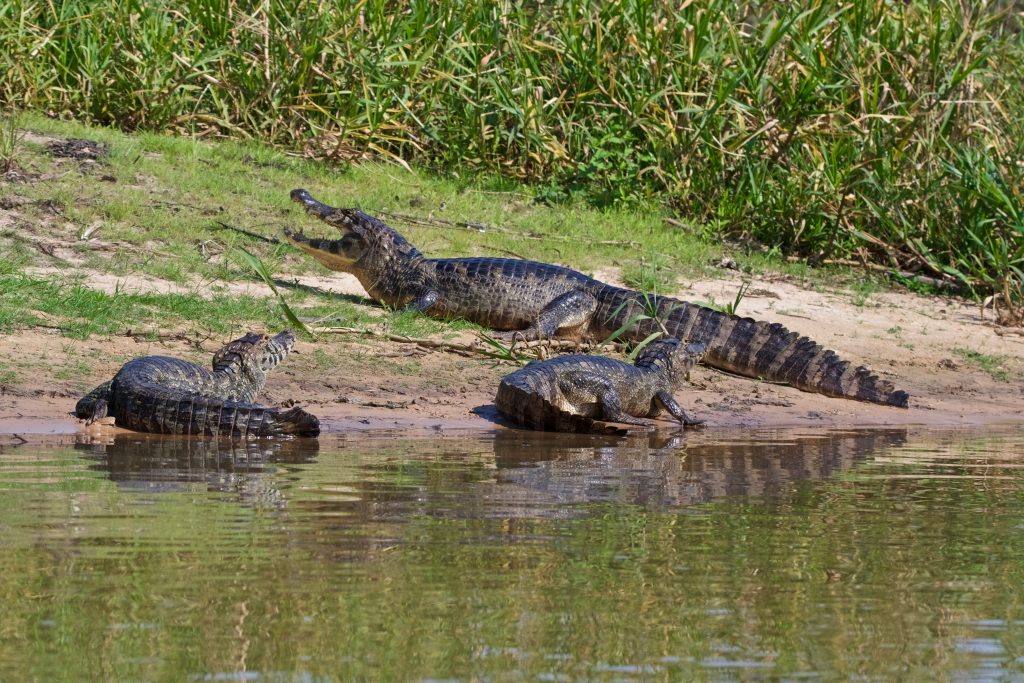 Herds of guanacos are a common sight in the Chilean Andes and, in the spring/summer baby guanacos or  ‘chulengos’ are spotted in the crowd. The mothers must be on the look out for pumas that find the young ones vulnerable. In the foreground are two nervous chulengos watching my guide and me as their mothers forage. 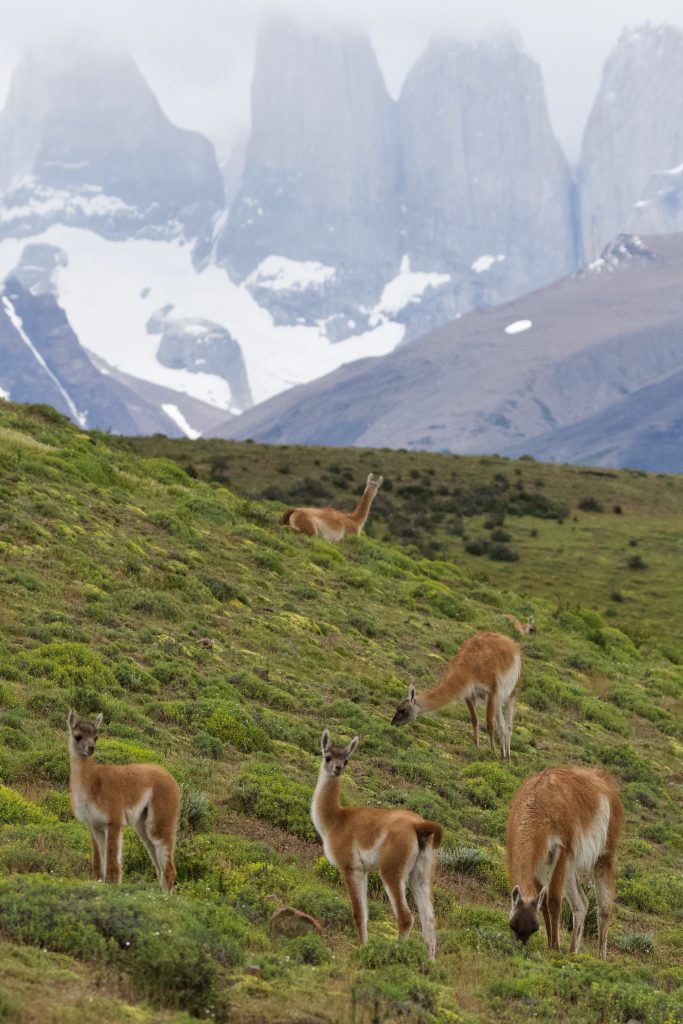 Capybara are the largest rodents in the world and can weigh as much as 150lbs (68kg). On my last evening in the Brazilian Pantanal, after the sun had gone down and Fabricio and I were heading back to our accommodations, I spotted this mother capybara with a youngster. A jaguar had been spotted on the other side of the river which explains the attentiveness.  It was the last image I took on that trip as I flew back to Sao Paulo and then home, the next day. 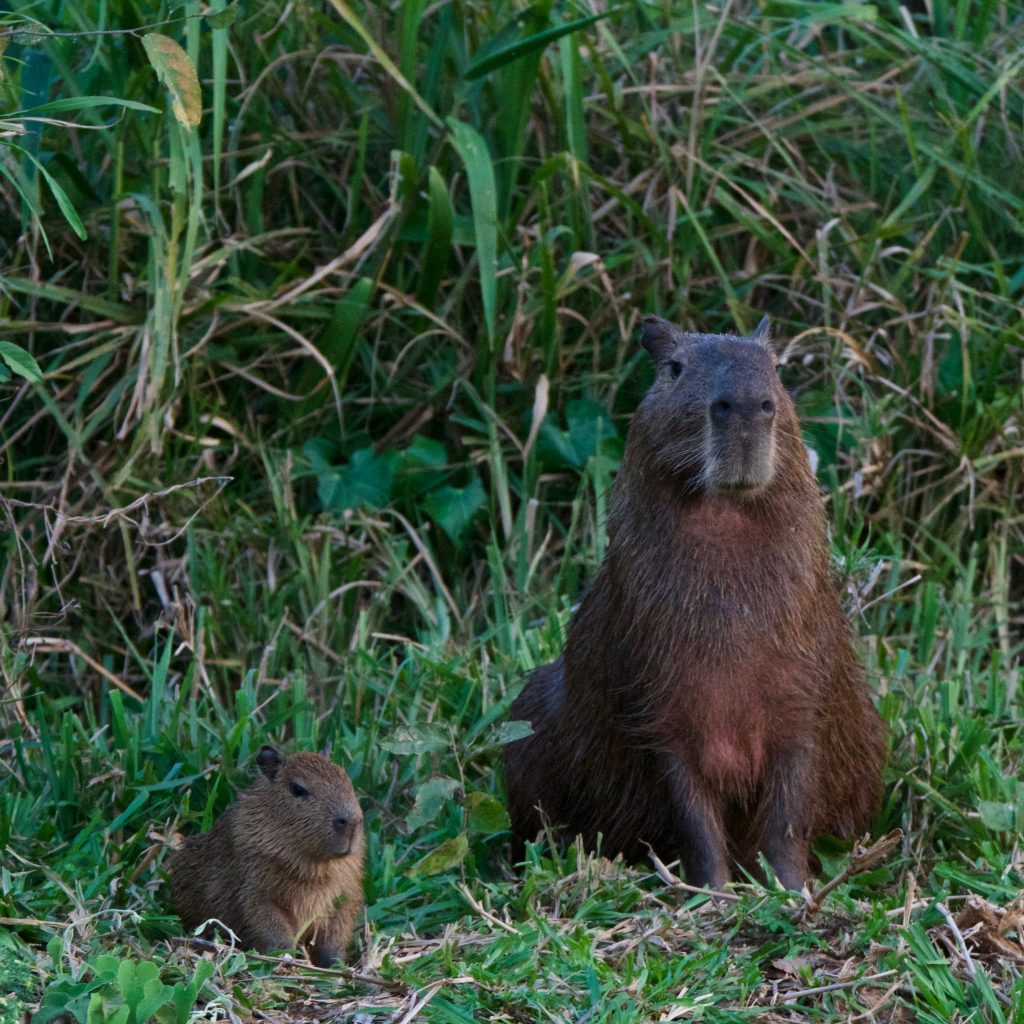 I hope that you have enjoyed these images. Happy Mother’s Day!