As a wildlife lover, who enjoys the challenge of capturing images of wildlife in natural settings, I dream of seeing a snowy owl flying in towards me with wings and talons outstretched as it catches its prey.

The light would be perfect so that the details of each feather can be clearly seen. You know the kind of image I am describing. The internet is full of them. But are they all captured ethically?

Over the seven winters I have been photographing snowy owls it remains a dream despite the fact, I will often spend ten to twenty hours a week, from November until April, with this beautiful species. In most cases I am alone in these farmers’ fields. And yes, I sometimes question my own sanity when the wind chill drops to -25C and my fingers and toes are in pain.

I have marvelled at snowies flying past me or in one case an adult female owl allowing me within ten metres as she devoured a bird she had caught. Just last week I had a two year old male fly directly at me and then up and over my head. That was only the second time in my life this has happened. 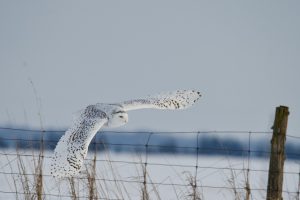 Each winter I study the habits of individual birds so I can determine where best to capture in-flight images. So, how is it that these perfect ‘dream’ images abound?

Recently I published a magazine article on snowy owls and received many emails. A few people enjoyed sharing images of their own including one lady who sent one taken by her neighbour. Everything about it was perfect – just like in my dream. I asked how her friend had managed to capture such a rare moment. Each year, she replied, the neighbour attends a snowy owl photography workshop on a farm.

A few years ago I attended an informative talk on ethics given by Mark Peck, manager of Schad Gallery of Biodiversity at the Royal Ontario Museum. Mark is also a keen wildlife photographer. He pointed to a photo of a bird delivering a worm to hungry chicks perched on a tree branch.

“What’s wrong with this picture?” he asked the audience before pointing out that the photographer, in his/her eagerness to capture a great picture, had removed the two chicks from their nest and placed them on the branch. Selfish actions like this jeopardize the security of wildlife.

Last week I spoke with some of the farmers I know in ‘snowy owl country’ who told me they have seen photographers in their fields carrying a bucket of mice purchased from a pet store. They walk out into the field and toss a mouse onto the snow in order to attract the owls. There is nothing natural about this abhorrent practice. Conditioning wildlife to become comfortable with humans is ill advised. Each year dozens of owls are struck by cars and killed. We don’t need to be encouraging them to come close to humans.

Some injured owls wind up in rehabilitation centres because they will no longer survive in the wild. And, some of these centres allow photographers access. That’s fine. But nobody should pass off a photo taken in such circumstances as a ‘natural’ photograph.

Now I am not saying that every one of these ‘dream’ photographs is the result of baiting or of using captive birds. But I am always suspicious. Snowy owls don’t normally encounter humans in their Arctic homelands.

Fortunately there has been a revolt against this type of photography. Prestigious competitions and magazine editors don’t accept these pictures if they are of captive birds or the result of being baited.

There are other ethical considerations. We have probably all seen a crowd of photographers standing at the side of the road or in a field shooting images of the same animal or bird. Invariably the bird, feeling stressed, will relocate. That’s a sign to leave the bird alone. But some photographers end up chasing the bird further into the field or to the next location. That’s harassment. 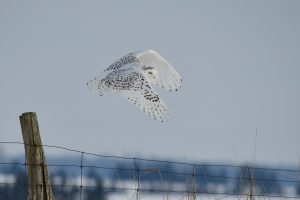 One of the farmers I mentioned earlier has put “No Trespassing” signs up on his property. He has made it know he is not fond of photographers. A few years ago he came out of his house to scold a group who had taken up position on the road directly in front of his house. They had trained their cameras on an owl perched on his television antenna. Understandably, he was uncomfortable at having to look out his living room window at this group.

I stopped in to see him and ask if I was still allowed out there – each winter he has at least one owl regularly in his fields. He told me I am still good to go. “You were good enough to ask for permission,” he explained. “But if you see anyone else out there tell them to get off.”

There is no law to prevent someone baiting an owl. And in all likelihood most farmers are not going to take the time to chase you our of their fields, although their off-leash dogs might. But it’s a combination of good manners and respect. Ultimately, the safety of wildlife should be the primary consideration when we are out there chasing our images.