As the weather has become more challenging fewer people are camping up in Killarney (northern Ontario) which is fine with me. I enjoy the solitude.  Temperatures drop to around freezing overnight – greatly enhancing the campfire experience.  I have visited this place three times in the past month and thoroughly enjoyed myself.

Driving along  highway 637, which bisects this rich wildlife habitat, I like to take my time as you never know what may come into view.

A week ago while camping at Killarney Provincial Park I took a long slow afternoon drive keeping my eyes attentive to any wildlife in the area. As I passed the rocks, where I had seen a wolf a week earlier, I slowed even more than usual paying special attention. I imagined seeing this same animal again.

And, there she was coming around the bend in the road.

I quickly stopped my car,  reached for my camera (which I keep on my passenger seat ready to go) and jumped out. The wolf instinctively trotted away looking over her shoulder all the while in case she deemed it necessary to sprint for cover. 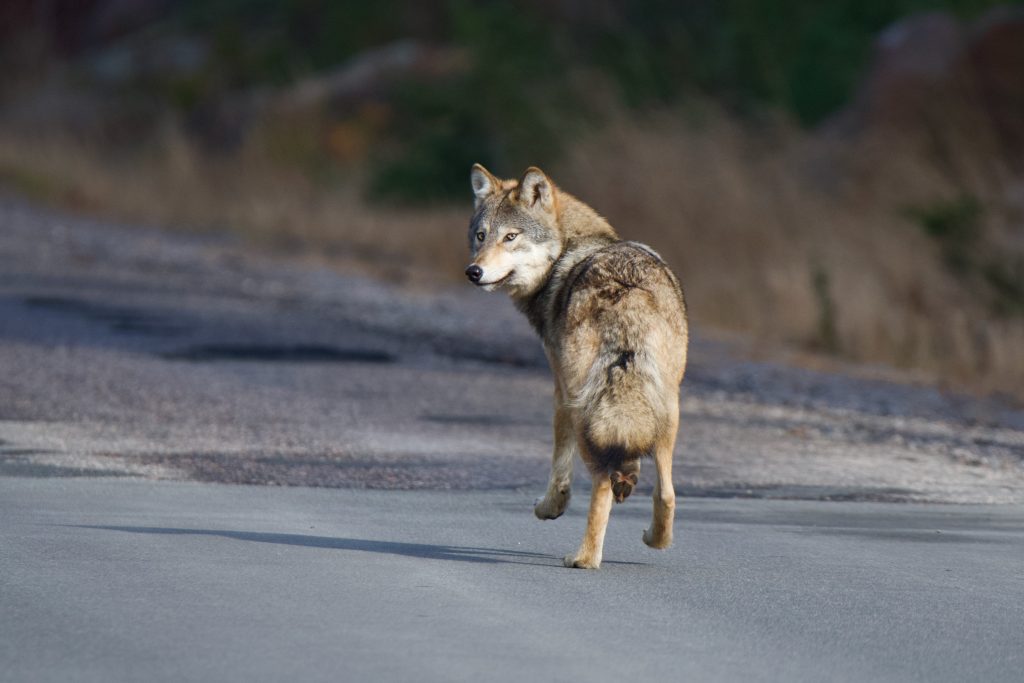 Upon inspection I wonder if, indeed, this is the same animal I had seen about a kilometre away. Wolves have their territories. Local people have told me they have occasionally seen small packs – which are after all extended families – along the road side. When they hear a car they quickly dart into the woods.

I returned to Killarney this past Thursday. After pitching my tent – and laying out my sleeping pad and sleeping bag – I reckoned there were a couple of hours of good light remaining and headed out along the highway.

I saw the remains of what looked like a rabbit on the side of the road. A pair of crows were picking at it but they flew away as I approached. I wondered what might show up if I stationed myself nearby but for some reason I continued my drive. Eventually the sun had dropped low and I turned back towards my camp site. That’s when I saw a white wolf running along the side of the road.

She headed into the bush when she saw my car parked and me standing at the side of the road. I could see her trotting through the trees parallel to the road, her footsteps audible on the leaves that covered the forest floor. I took a few pictures in very low light conditions and got back in my car.

I returned to that region yesterday in the hope of seeing her again in better light. It was raining on and off  but the light was passable. I couldn’t believe my luck. The wolf was running along the road a few hundred metres in front of me. As I approached she vanished into the woods. So, I drove ahead a couple of hundred metres and waited. Out she came again and I was able to get some more images. 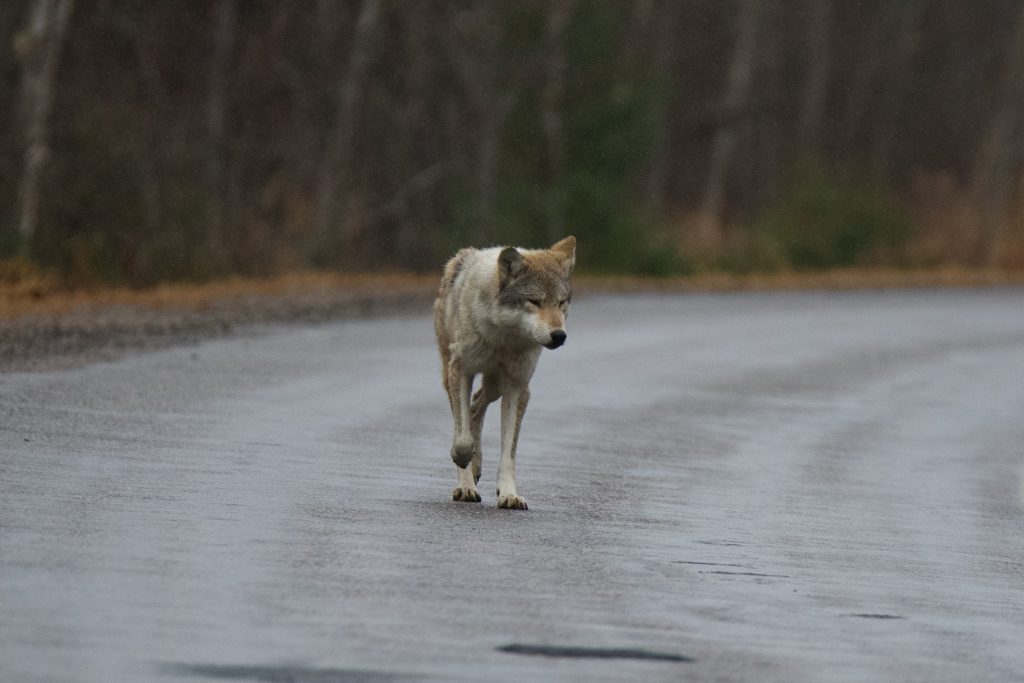 When I focused tightly on her I noticed she had bare patches on her sides and on her tail. That’s a sign of mange – a disease caused by mites buried into the animal’s skin. The irritation causes the wolf to scratch incessantly and even rub against tree bark to relieve the itching. It also results in a loss of fur.  Although mange might be cured this wolf will have to survive the winter and with it the dangers of both the loss of body heat and frostbite on those exposed areas. 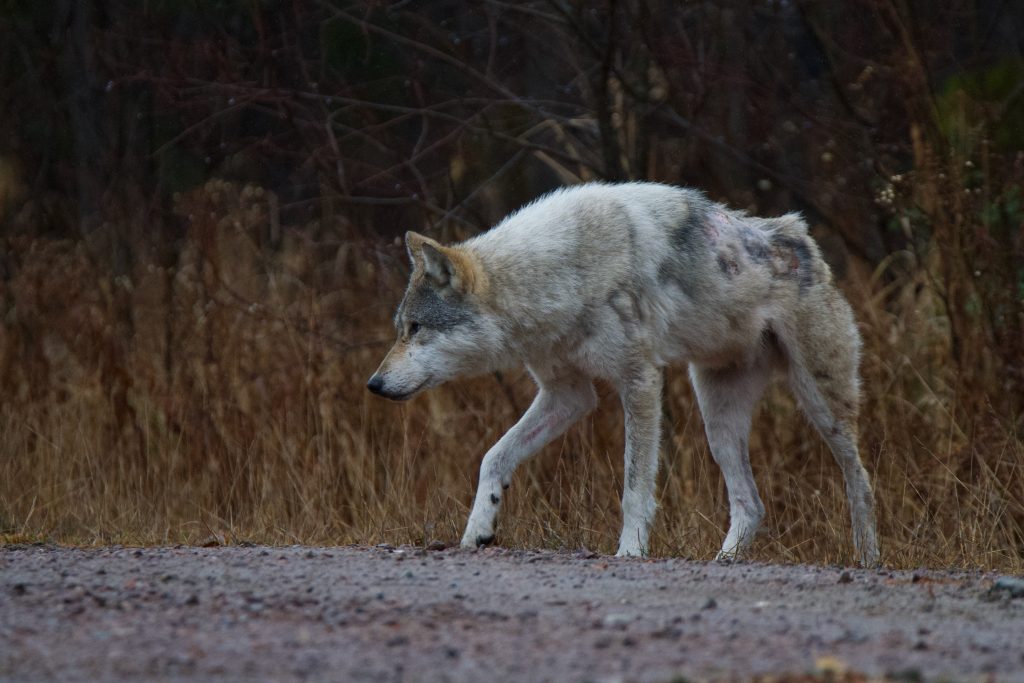 I shared the images with Brent Patterson, who is both a wolf researcher at the Ministry of Natural Resources and Forestry and a Trent University professor. He confirmed it was mange. My excitement at seeing such a beautiful white wolf was at once tempered by the sadness of her plight.

Although medications exist to treat mange there is nothing that can be done for this wolf since she would have to be trapped and treated. Presently there doesn’t seem to be any initiative to handle this expensive management. Nevertheless, I am encouraged, after reading some Danish research that some wolves have survived mange. They appear to have tougher immune systems than other canids like coyotes and foxes.

I will hold out hope but nature can be cruel. 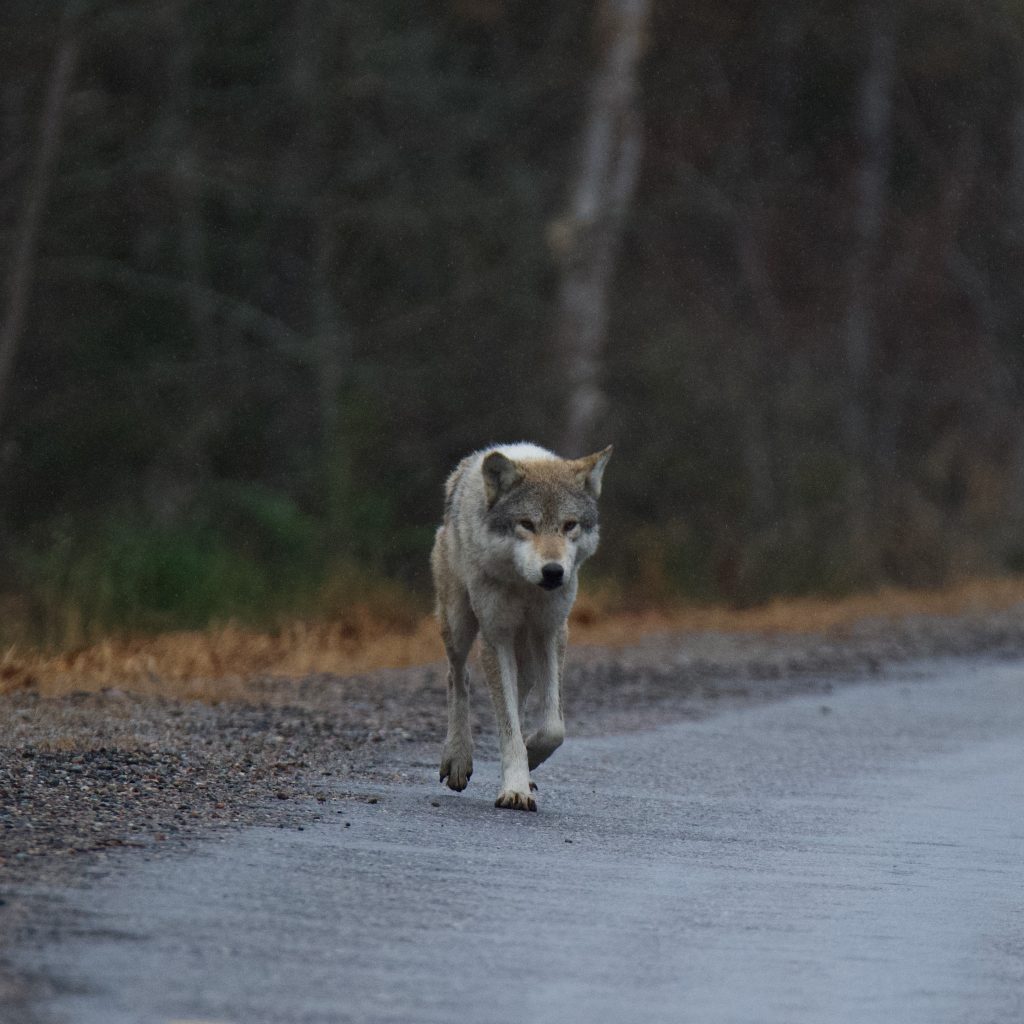