October is my favourite time to go camping in northern Ontario and for the past three years I have preferred Killarney over other provincial parks. Due to Covid travel restrictions, though, more people have been camping and camp site availability has been severely limited. Last week I decided to visit Killarney Mountain Lodge rather than camp.

My hope was to photograph any one of three mammal species: bear, wolf and moose. Folks working at Killarney Mountain Lodge told me that wolves had been seen in the village of Killarney itself. A couple of the maintenance guys said they had seen bears directly behind the building where my room was located. There is a lagoon there. Naturally, I was excited by the prospects.

Killarney is at the very end of Highway 637 and is surrounded by wilderness which includes two provincial parks (Killarney PP and Point Grondine PP) as well as Roche Rouge Campground. I have had great experiences in the past. A year ago I had seen an adult bear run across the road a couple of hundred metres in front of me. But, he was so fast that all I managed was an image of him racing through the marsh to get to the cover of the forest.

Two years ago in the last week of October, I was camping inside Killarney Provincial Park when I encountered a tiny bear cub foraging for acorns about forty metres from my tent. There was nobody else near so for three days I could observe her casually. On my last night in the camp I was awakened by the husky roar of an adult bear outside my tent. While the cub wasn’t afraid of me the adult bear was another matter.

When I couldn’t find the cub anywhere the next morning I reported my observations to the park staff. “We know about that cub,” a warden told me. “ It won’t survive the winter without its mother. We will call the Ministry (of Natural Resources and Forestry) to come and collect it.”

Five days later the bear cub – eventually tagged #3129 and the subject of a magazine article I wrote – was safely tucked away at Bear With US a Sprucedale, Ontario based rehabilitation facility. In July 2019 she was released 135km north of Killarney, a happy ending to what could have been a tragedy.

Bear #3129 in Killarney Provincial Park, October 2018. An orphan, she  was eventually captured, rehabilitated and then released in July 2019 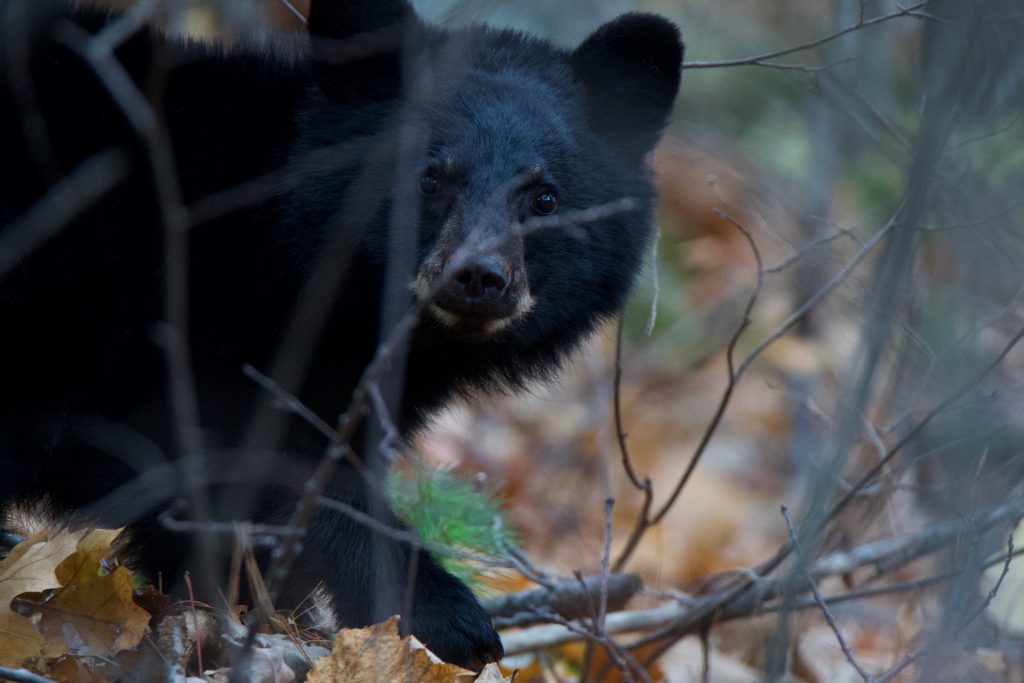 My search last week resulted in one sighting of a red fox, one bald eagle and a garter snake I stopped to photograph while out on a trail hike along Georgian Bay. So I was feeling disappointed with the outcome when I packed my car and began the journey home Thursday morning. But barely three minutes outside the KML property my great ‘wildlife luck’ kicked in. There was a bear cub on the front lawn of a residence.

This cub was wandering around residences in Killarney, Ontario last Thursday. No doubt an orphan it will have to figure out how to survive alone through the winter. 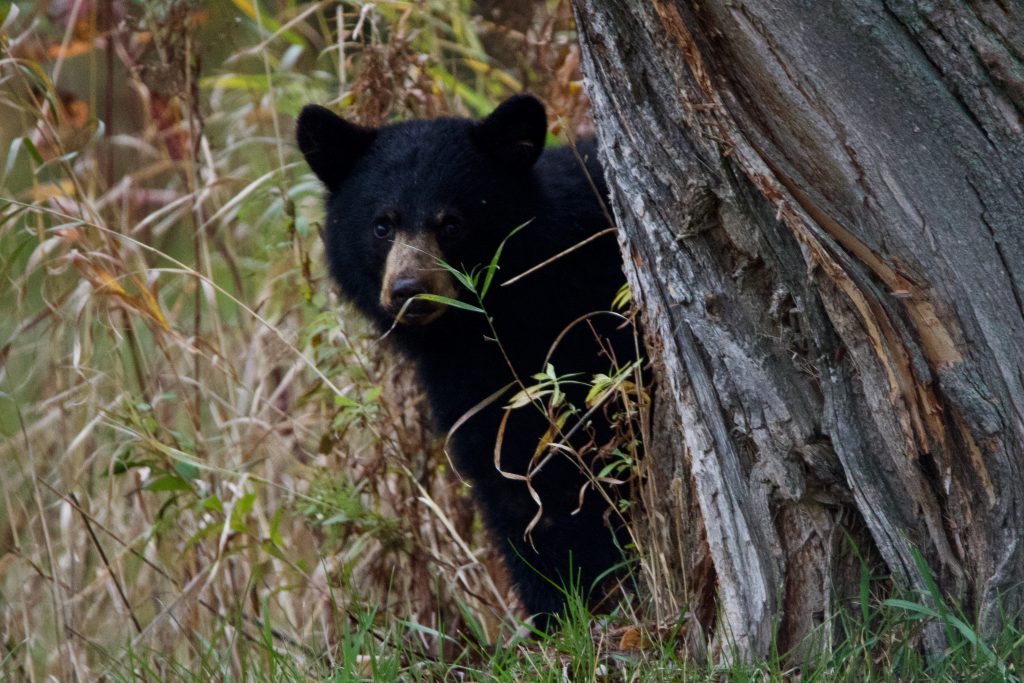 I turned around the corner, lowered the window and parked the car so I could have a clear view. At first the cub climbed a tree and peeked through the branches at me. When it could see I was still in my car it came down to ground level. Then it came closer and ate some acorns right next to the road before running onto the next property. For a few minutes it tore up somebody’s pile of insulation. 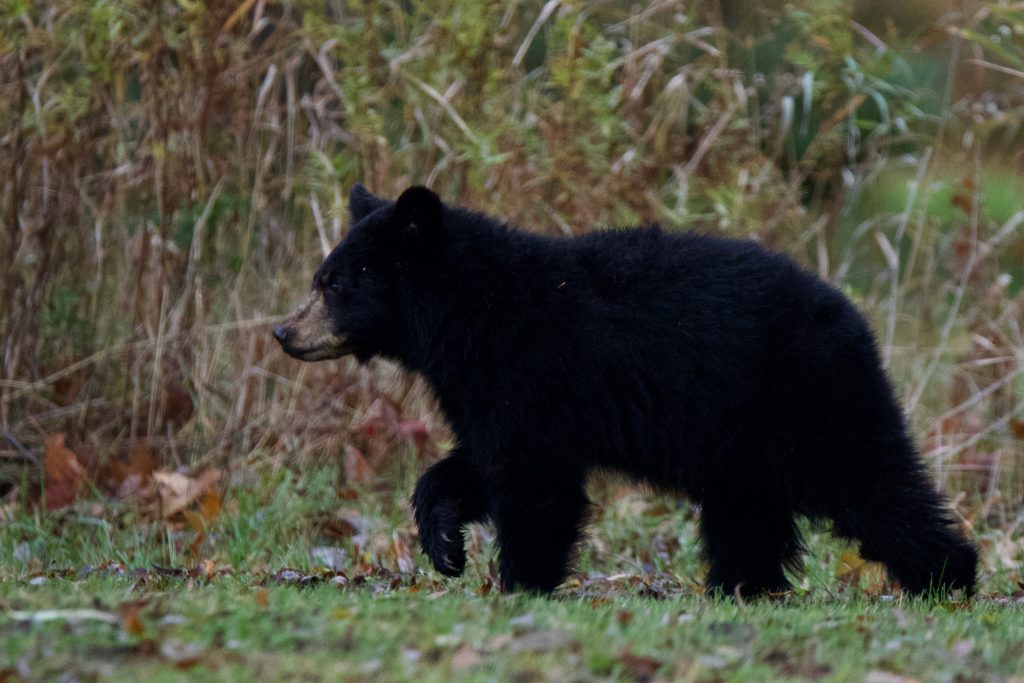 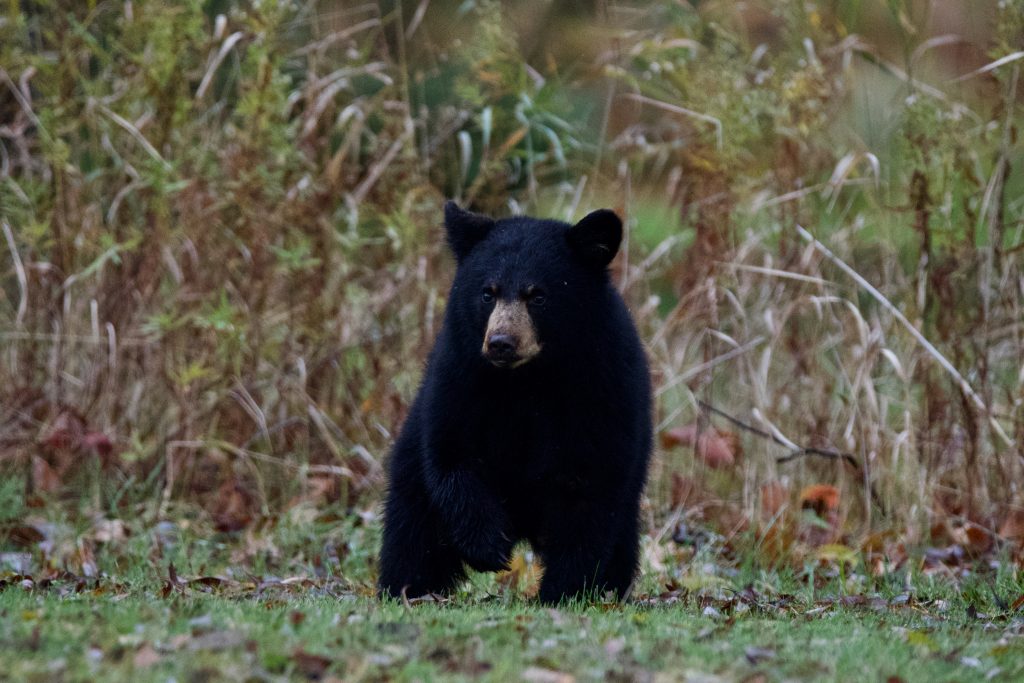 I guessed it was a cub of the year so it would need help. I took more than a hundred images over the next twenty minutes. It eventually disappeared in the bush.

I never saw an adult bear nor siblings. Once again it must have been an orphan, its mother likely the victim of the autumn bear hunt. I texted Mike McIntosh of Bear With Us to alert him. Then I drove into Killarney PP to speak with their biologist. Unfortunately, he said, they can only do something with bears on park property. I got back in my car and continued homeward.

Ten minutes down the road I spotted a long legged canid – either a coyote or wolf – crossing 637. I pulled over, put on the blinkers and got out of my car. I had my camera in hand as I looked up and down the ditch next to the road. No sign of the coyote or wolf. Then I guessed where it might have crossed and there, in some brush, I saw it staring at me.

Is this a wolf or a coyote? Because of interbreeding it’s hard to differentiate. 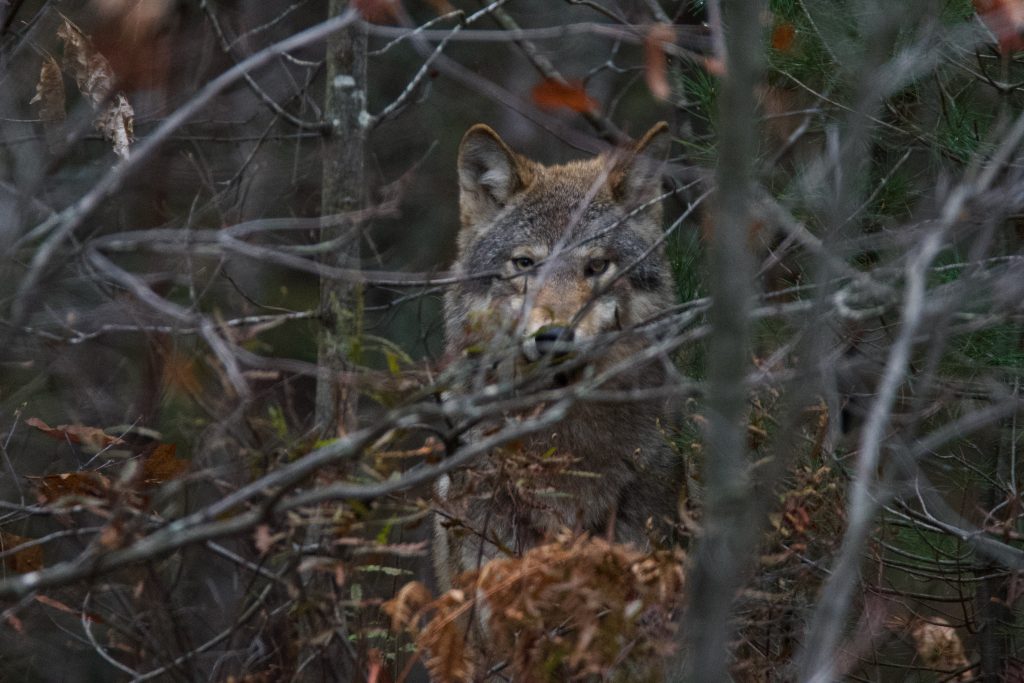 By the time I got to Parry Sound – about an hour and ten minutes further on – I received a phone call from Mike McIntosh. He asked how big I thought the cub was then told me his facility was full. He urged me to call the MNRF bear hotline as they had recently licensed another facility to handle the unusually large number of orphaned bear cubs this year.

The next day Brent MacDonald, an MNRF bear technician, called me and asked me some questions. Then he said “We have something in common. I was the one who tagged bear #3129.” He gave me further details of that day when he captured her in Killarney. I was very grateful. These guys care immensely for wildlife and were it not for their efforts more bears would perish.

From looking at my photos he concluded this latest cub was between 20 and 25 pounds and, because of the number of cubs they are finding this autumn and the limited places to put them, they had to focus on picking up those in the most desperate need. That means cubs of around 15 pounds. On the positive side he did say that this cub looked very healthy. And cubs can sometimes make it without their mothers.

As for the coyote or wolf the jury remains deadlocked on the identification. Brent thought it looked like a coyote while a biologist I spoke with said it had wolf characteristics. Because of the interbreeding between the two species it is harder to accurately determine. But the rounded ears seem more in line with a wolf. I have sent the photos to other biologists for their opinions.

Once again I lucked out with sightings of these animals. How lucky we are to share our land with such marvellous creatures. But it breaks my heart to realize these orphaned bear cubs are going to struggle for survival.