If you have regularly followed my posts or attended any of my wildlife photo presentations you will know that I often mention the absence of a moose in my photo library. While everyone seems to encounter them at some point I have struck out no matter how many times I head to northern Ontario. My luck changed last week.

On Wednesday I was driving my son, Owen, to Sudbury for his graduation from the McEwen School of Architecture. He received his Bachelor of Architectural Studies on Thursday. We were making good progress and the rain had stopped by the time we passed through Parry Sound. Visibility was much better. So, I asked Owen to get out my trusty Nikon D500 with a 500mm prime lens attached.  Owen looked at me with raised eyebrows.

“We have time to drive to Killarney and look for bears and wolves along the road,” I told him. Note that I didn’t mention moose. Although I didn’t see Owen roll his eyes, I could hear them moving about in their sockets!!!!

Killarney is one of my favourite places. I have camped there numerous times over the years sometimes five times in two months and usually when there are few people around. The odds of seeing wildlife increase with the absence of humans. The Killarney exit off Highway 69 is just south of a 30 metre wide wildlife crossing near Burwash. This crossing was built in 2012 to help deer, bears, wolves and many other species – including moose – get from one side of the highway to the other.

We drove slowly west along highway 637, the road to Killarney, keeping a lookout for any wildlife. I have seen bears, wolves, bald eagles, great horned owls, pileated woodpeckers and foxes in past visits. But this time, we didn’t see any wildlife on the westward leg of the journey and the potholes were plentiful. So, I turned around at the Point Grondine Trading Post and we slowly made our way back towards Highway 69.

Over the years I have learned to be patient when it comes to wildlife sightings so I held out hope something might appear. As we passed by a marsh, a spot I have often envisioned a moose would visit, I saw two enormous creatures in the water. I slammed on the brakes and announced to Owen ‘Two moose.’

I reversed and then stopped the car putting on my four way flashers. When I got out with my camera I walked along the side of the road where I might find a clear view of the pair.  Owen also emerged from the car and stood there watching the moose wandering through the water. 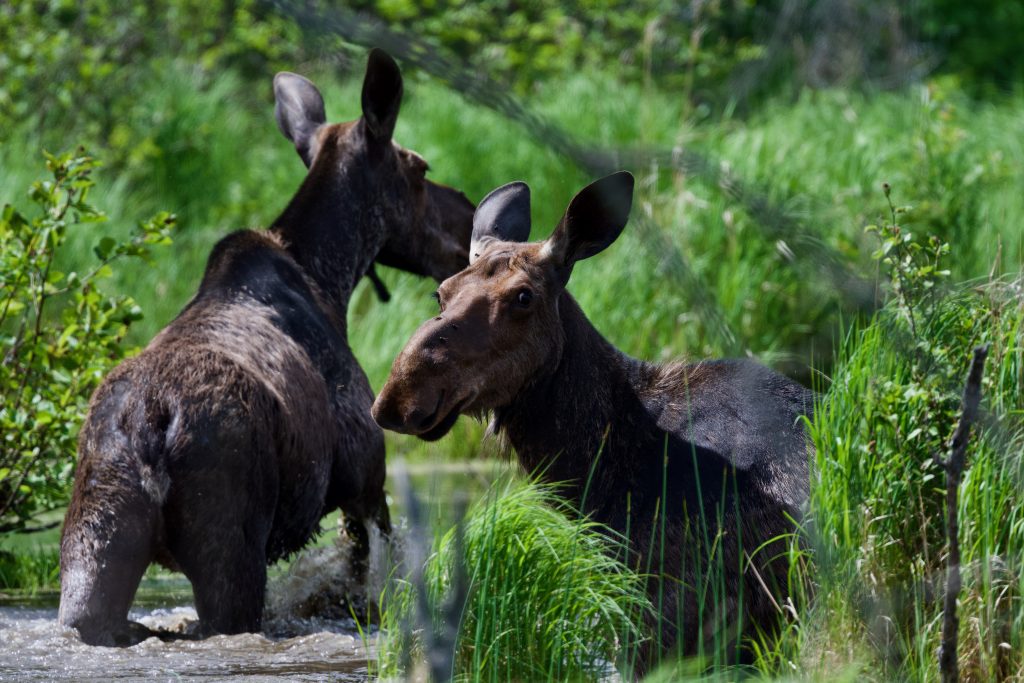 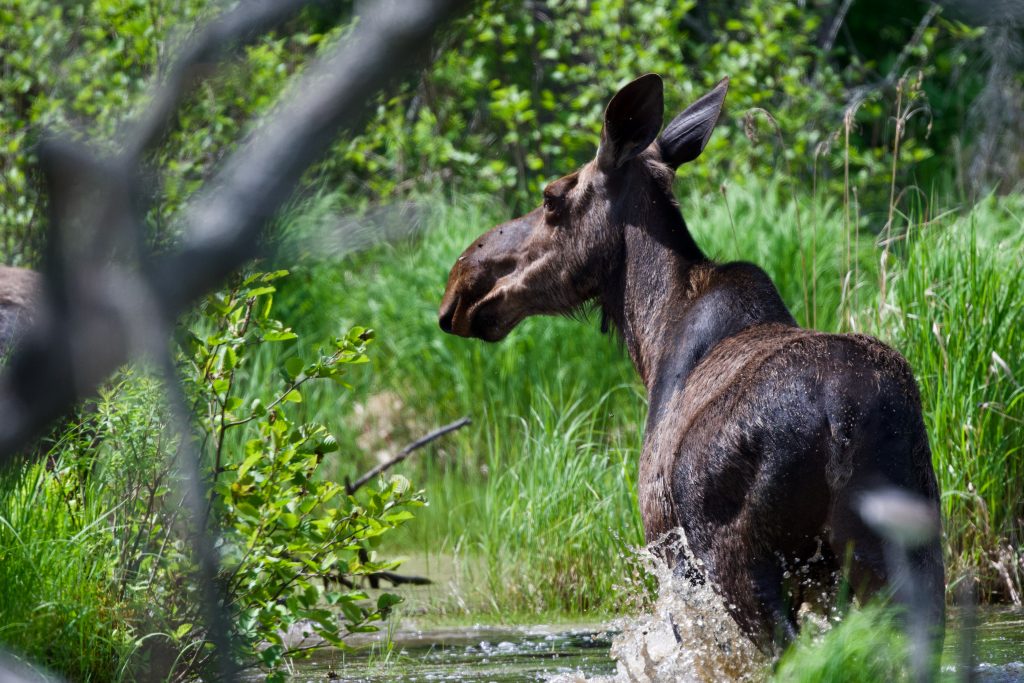 Of course I was delighted with this chance encounter and with the images taken in the middle of the afternoon. Owen too was impressed with the sighting. The light wasn’t the best but if you only go out to photograph wildlife when the conditions are perfect, well, you are going to miss an awful lot.

It was a wonderful experience and hopefully the first of many more. But with wildlife you never know.

If there are any folks out there who have insight as to the description of these two moose please let us know. My first thought was this is a mother with her offspring. I know they pack on  weight very quickly soon after birth but perhaps the calf is a year old?

I hope you are enjoying some wildlife encounters of your own. Stay safe!